In response to Yingling’s j’accuse and similar indictments, Tom Ricks has written a must-read book that explains why America’s generals now lose wars with impunity. In The Generals, he argues that the decline in the performance of the Army — from the triumph of the World War II to stalemate in Korea through defeat in Vietnam to the fiasco of the early years of the Iraq war — can be attributed to failures in how the Army manages its senior officers. Gen. George C. Marshall, the architect of victory in America’s greatest war, relieved subordinates regularly and with gusto. Since that war, Ricks argues, the Army has abdicated its responsibility to police its own ranks, failing to hold senior officers accountable for their actions. Instead it has fallen to presidents to relieve generals, as Harry Truman did to Douglas MacArthur for rank insubordination during the Korean War or Barack Obama did to Stanley McChrystal for indiscrete political comments. 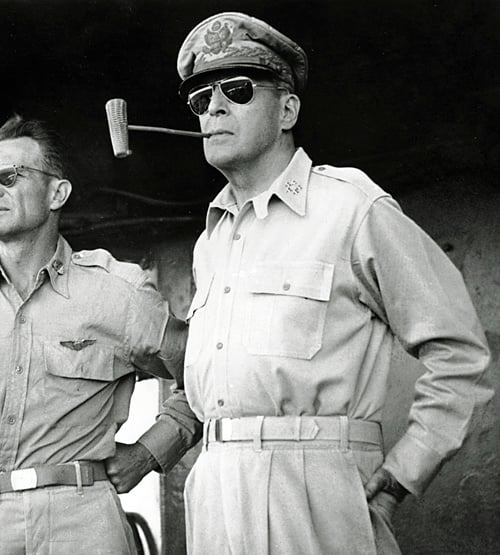 Gen. Douglas MacArthur was fired by then president Harry Truman for insubordination during the Korean War. US Army photo.

In a cascading litany of failures, this book presents more villains than heroes. Other than Marshall, generals who receive high praise include Matthew Ridgway, who turned around a losing war in Korea, and David Petraeus, who performed a similar task in Iraq. Marine Maj. Gen. General O.P. Smith earns praise for his exceptional performance at the 1950 Battle of the Chosin Reservoir, where his inspired generalship saved a Marine division from a Chinese onslaught. Smith’s success is contrasted with US Army generals who left their units exposed and subject to devastating defeats.

Others are not so fortunate. Generals Maxwell Taylor and William Westmoreland earn scathing criticism for their performance in Vietnam. Gen. Tommy Franks is faulted for his leadership in Iraq and Afghanistan and for his post-Army conduct, and Lt. Gen. Ricardo Sanchez is described as “in over his head” for his leadership during the first, horrible year of the Iraq fiasco.

There is much truth in Ricks’ description of flawed Army generalship. Since Vietnam, the Pentagon and civilian administrations have too often failed to hold general officers accountable for their actions in war. The admiration that the American public rightly proclaims for the soldiers of today’s conflicts should not automatically extend to their superiors, despite the hard tasks they recently have been given. America’s major wars of the past four decades (other than the brief and almost completely conventional Operation Desert Storm) have been the sort of protracted counterinsurgency campaigns that have tested generals since the Roman Empire. While Rome’s legions could simply lay waste to rebellious provinces, modern morality has rendered that technique untenable.

Instead, success in modern counterinsurgency campaigns demands a precise calibration of military force along with an integrated campaign to improve governance, spur economic development, and create effective local security forces—formidable tasks for which military service is seldom good preparation. Only a few generals have shown the ability to successfully integrate these tasks; Creighton Abrams in Vietnam and David Petraeus are the best examples, although their talents were applied to the conflicts they led late in the day — after many damning mistakes had been made by their predecessors. Ultimately, the failures of American generalship in Iraq, as in Vietnam, resulted from failures of imagination and the ability to adapt to changed conditions in the Army over several generations.

Ricks notes that “Of all the nation’s armed forces, the Army arguably is the dominant service, the one around which the national defense still is constructed.” This has been true for the past decade, which saw more soldiers deployed to Iraq and Afghanistan than Marines, sailors, and airmen put together. However, there is no guarantee that this state of affairs will continue, and it is therefore essential that this book be widely read outside the Army. The Navy and Marines have much to gain from a careful consideration of the lessons with which Ricks concludes the book. The rise of China and U.S. pivot to Asia, along with an American population weary of protracted ground wars in Asia, likely signal an increase in the prominence of the sea services during the next few decades—and it is worth noting that both the current and incoming commanders of the Afghan effort are Marines rather than Army generals. One hopes that the naval tradition of relief for ship captains who run aground (literally or figuratively) has properly shaped the men and women America will need on point in the Pacific for the next generation.