The Senkaku Islands became a point of friction between China and Japan in September 2010 when a Chinese fishing boat captain deliberately rammed a Japanese coast guard vessel in waters off the Senkakus. Previously, when fishing incidents occurred, Japan deported the offenders back to China. In this case the Japanese apprehended the Chinese captain. China viewed his arrest as a violation of their 1978 understanding; the captain’s detention became a major diplomatic incident. When China suspended the export of rare earths to Japan, the Japanese government backed down and released the Chinese skipper.

Key Developments of the Crisis

Of the five islets in the Senkaku islands, four are owned privately while the fifth is owned by the Japanese government. In April 2012, Shintaro Ishihara, the nationalist governor of Tokyo, announced he would purchase and develop the Senkakus in order to protect Japanese sovereignty. The Tokyo mayor set up a fund to solicit private donations from the Japanese public.

From mid-August to mid-September the dispute over the Senkaku Islands became a full-blown diplomatic crisis consisting of seven interrelated and overlapping developments.

The first was the announcement by Prime Minister Yoshihiko Noda in July that the Japanese government would buy the privately owned islets to ensure that the central government, not the mayor of Tokyo, exercised control over relations with China.

On Sept. 6 it was announced that the Japanese government reached preliminary agreement to purchase three islets from their owners for $30 million. In an effort to allay China’s reaction, the Japanese government announced it would strengthen the presence of the coast guard in the waters surrounding the Senkakus to prevent private citizens from Japan, China or Taiwan from conducting demonstrations on the islets. Further, the prime minister agreed to a proposal by his foreign minister, Koishiro Gemba, that there would be no new construction on the Senkakus and only minimal repair to existing infrastructure would be carried out. 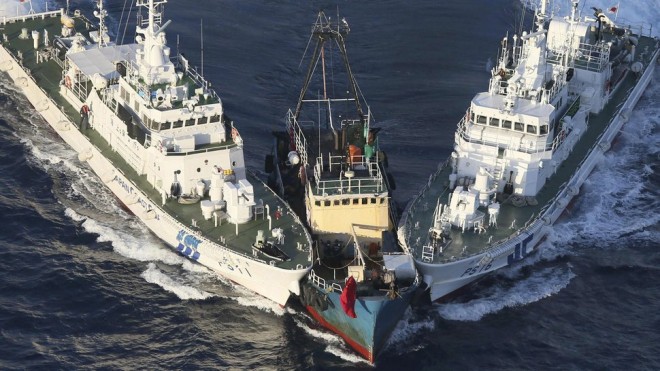 The second development concerned the revival of political tensions between South Korea and Japan coincidently with growing tensions between China and Japan. On August 10, South Korean President Lee Myung-bak paid a visit to Dokdo island in the Sea of Japan. Japan claims sovereignty over the island which it calls Takeshima and recalled its ambassador from Seoul in protest. Tensions were inflamed on August 19 when 30 South Korean citizens unveiled a 1.2 meter monument on the island inscribed with the words “Dokdo, Republic of Korea.”

The third development comprised the intervention of nationalist citizens from the claimant countries. On Aug. 15, 14 Chinese activists from Hong Kong sailed to the Senkakus, landed on one of the islets, and planted the Chinese flag. They were detained by Japanese authorities and immediately deported. Four days later an estimated 150 Japanese nationalists journeyed from Okinawa to the Senkakus. Several jumped ship, swam ashore and raised Japanese flags.

Chinese domestic nationalist sentiment was further inflamed when the Japanese media reported details of the purchase of the three Senkaku islets by the central government a week before the 81st anniversary of the Mukden Incident marking the start of Imperial Japan’s invasion of northern China. On the weekend of Sept. 15 massive anti-Japanese protests took place in 85 Chinese cities, including Beijing, where crowds demonstrated outside the Japanese Embassy.

The fifth dimension of the Senkaku crisis involved the multifaceted reactions by the Chinese government against Japan. On Sept. 5, for example, the Chinese Foreign Ministry called Japan’s purchase of the islets “illegal and invalid.” On Sept. 11, the Chinese Foreign Ministry said that Japan’s actions “cannot alter the fact that Japanese side stole the islands from China.” China officially released base points and baselines of its claimed territorial waters around the Diaoyutai and formally filed a copy with the United Nations secretary general.

Senior Chinese leaders weighed in to bring political pressure to bear on Japan. At the Asia-Pacific Economic Cooperation Summit in Vladivostok (Sept. 8 and 9), President Hu Jintao personally warned Prime Minister Noda that nationalizing the Diaoyutai was illegal. In addition, Premier Wen Jiabao and Wu Banggu, chairman of the Standing Committee of the National People’s Congress, both issued separate warnings to Japan.

The most serious Chinese response was the dispatch of unarmed China Marine Surveillance (CMS) ships to the Senkakus where they were ordered to conduct “routine monitoring.” On Sept. 14, six CMS ships were reported on station; two ships entered Japanese waters and were warned off by Japanese coast guard vessels. The CMS ships retorted that they were in Chinese territorial waters and requested the Japanese to withdraw. Japan summoned the Chinese ambassador in Tokyo to lodge a protest.

In addition to the above, Chinese authorities were reported to have facilitated the Hong Kong activists who landed on the Senkaku Islands on Aug. 15. Previously Chinese authorities prevented activists from leaving Hong Kong. Local Chinese officials also were implicated in organizing anti-Japanese protests including providing transport and distributing printed signs with anti-Japanese slogans. Plans to hold ceremonies to mark the 40th anniversary of the normalization of Sino-Japanese relations (Sept. 29, 1972-2012) were cancelled and then rescheduled at a much lower level.

Additionally, Chinese officials were reported to have deliberately slowed the approval of Japanese imports as well as the issuing of visas. Chinese tourism to Japan dropped. China also cut back its licenses for the export of rare earths, a tactic first used in 2010.

The sixth development concerned the intervention of Taiwan to publicize its sovereignty claims to the Diaoyutai. On Sept. 13, two coast guard ships were dispatched to monitor developments around the Senkakus and protect Taiwanese fishermen. On Sept. 25 an estimated 40 to 50 Taiwanese fishing boats, escorted by ten coast guard vessels, sailed into the territorial waters around the Senkakus to assert Taiwanese sovereignty. This incident was notable for the duelling between Japanese and Taiwanese coast guard ships using high-powered water cannons. Inclement weather forced the Taiwanese to retire.

The seventh development concerned the involvement of the United States. The U.S. declared that it took no sides in the territorial dispute between China and Japan, but the U.S. also reaffirmed that its treaty commitments to Japan included the Senkaku Islands.

The Senkaku dispute erupted at the same time as secretary of defense Leon Panetta made a long-planned trip to Japan, China and New Zealand. Panetta had the difficult task of simultaneously promoting engagement with China while reaffirming the U.S.-Japan alliance. During his stopover in Tokyo the secretary of defense said with reference to the Senkaku dispute, the “possibility that a misjudgement on one side or the other would result in violence.” Japan and the United States also announced the deployment of the second advanced missile-defense system in Japan.

Six major conclusions may be drawn from the dispute over the Senkaku/Diaoyu islands in 2012.

Second, China’s current power shift has created a political environment in which factions vying for power have attempted to manipulate China’s territorial disputes with its neighbors for their own ends. For example, some China specialists argue that the dispute over the Senkakus was stoked in order to influence selections to the Politburo Standing Committee. Seven of its nine members will step down at the 18th party congress that convenes in November.

Other analysts argue that the Senkaku crisis provided an opportunity for opponents of Xi Jinping, the presumptive next state president and party general secretary, to prevent him from assuming the chair of the Central Military Commission. According to this view, Hu Jintao, the current chair of the Central Military Commission, would remain in this post for another year or two.

Third, the Senkaku dispute reveals that territorial disputes in East Asia pose a risk for U.S. alliance management and the U.S. strategy of rebalancing in the Asia-Pacific. As noted above, the Senkaku dispute created difficulties for U.S. attempts to engage with China while reaffirming U.S. treaty commitments to Japan. Taiwan’s activism over the Diaoyutai adds an additional complication. U.S. attempts to forge better triangular relations with Japan and South Korea are undermined by the dispute over Dokdo/Takeshima island. China can be expected to take note that of and play on those tensions within the U.S. alliance system.

Fifth, the Senkaku islands dispute reveals that China is toying with the idea of using its economic strength as an additional means to pressure U.S. allies. During the Scarborough Shoal dispute earlier this year, China cut tourism and halted the import of bananas and other tropical fruit from the Philippines. According to a report by JPMorgan-Chase, as a result of the Senkaku dispute Japan’s economic growth is likely to drop 0.8 percent in the fourth quarter as a result of a decline of exports to China and a drop of Chinese tourism to Japan.

Sixth, China’s territorial dispute with Japan is unlikely to result in military conflict. China has quite deliberately used civilian agencies, such as the China Marine Surveillance force, and private Chinese fishermen, to assert its sovereignty claims. The People’s Liberation Army Navy has been kept in the background. Provoking a military clash would be counterproductive; it would disrupt trade, threaten the security of sea lanes, cause insurance premiums to rise, and draw in the United States.