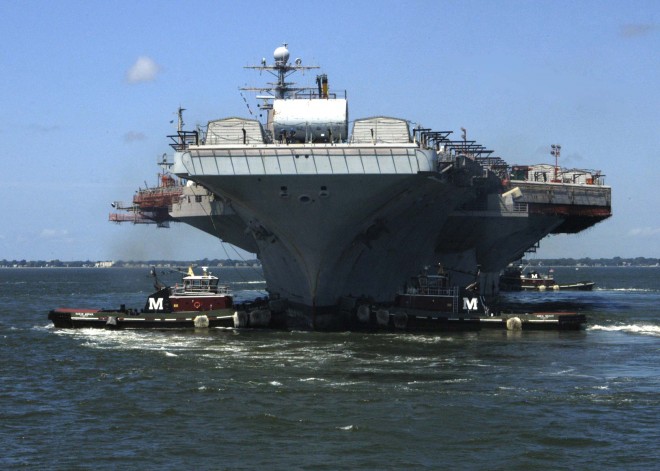 But, even as the Senate was working through the language of the House-passed CR, DoD Comptroller Robert Hale was piecing together funding from elsewhere in the Department to pay for these two must-have programs. In the $219.1 million reprogramming action dispatched last Tuesday to Capitol Hill, Hale sought Congressional approval to shift excess funds from seven personnel accounts into three “higher priority items”. Approval by House and Senate defense committees gives the Navy the authority – and funding – to complete the RCOH on the TR and begin buying long-lead items for Lincoln’s RCOH.

According to the DD 1415-1 submitted to Congress, Roosevelt will get an additional $68 million to augment funding that would have otherwise run out in the February timeframe.

Lincoln has already moved from its long-time homeport in Everett, WA to Newport News, VA for its RCOH. Without the $96.1 million reprogramming request, work on the Lincoln would be delayed, the DoD request says, adding that the delay would mean the Department could not meet its current fleet response requirements. A slip in the schedule would also mean that the Virginia shipyard doing the work would need to delay the scheduled inactivation work on USS Enterprise (CVN 65), scheduled to begin in late-2014.

The reallocation of money means that, at least for now, the Navy will be able to keep its carrier work on schedule.

DoD also moved $55 million into the DDG-1000 program to finish construction of the long-delayed ship that was once billed as the future of the Navy’s destroyer fleet. The Zumwalt-class has been plagued by development delays and questions about its experimental hull design, power requirements and the utility of building stealth into one of the Navy’s premiere power projection vessels. Congress dramatically scaled back the program and has since pushed the Navy to restart production of Arleigh Burke-class destroyers to meet long-term readiness needs.

Congress is also leaning heavily on the sea service to retain ships scheduled to be retired over the next two years. The House version of the annual defense authorization bill prohibits the retirement of six cruisers and two amphibious assault ships. The House Appropriations Committee funded three cruisers for next year, and their Senate counterparts opted to fund four.

Last week, a Navy spokesperson hinted at some flexibility in the ship reductions, saying four of the six Aegis-equipped cruisers –Cowpens, Anzio, Vicksburg and Port Royal – will remain in service through at least March “pending completion of the Fiscal Year (FY) 2013 authorization and appropriation process, or other agreement with Congress.” Completion of an authorization bill is expected before the end of the calendar year and follow-on spending measure will need to be passed before the end of March.

No additional funding was requested in the latest reprogramming action to cover the cruisers, but the Navy can draw on FY 2012 funding levels in the CR to operate and maintain the ships. Congress could also use the authorization process to allow some reductions in fleet force structure while forcing the Navy and Marine Corps to retain certain specific ships. How the Hill decides to move forward and when they do it will remain very much in question until Members return to Washington in mid-November, but it seems clear from both authorizers and appropriators that the Navy will end up retiring fewer ships over the next two years than previously planned.