This article is a response to “Atlantic Naval Forces Have a Future,” written on Sept. 10, 2012 by J. Randy Forbes.

The U.S. Navy’s shift in strategic emphasis in recent years provides the impetus for a closer examination of the options for both force structure and basing. These discussions must be frank and driven by strategic realities.

Last week’s assessment by Randy Forbes’ is absolutely correct when arguing that the number of ships available for service remains the most critical issue facing the Navy. An increase of more than 50 percent in operational ship-days combined with the smallest Fleet in almost a century has led to a rash of reports of ships suffering from degraded material conditions. The maintenance facilities in U.S. ports are unparalleled and represent the best answer to reversing those troubling trends. The assertions concerning the need to maintain a credible force in our Atlantic ports are also compelling. Southern Command, West African contingencies, and European Command requirements are all best supported from East Coast traditional homeports. Those arguments, while compelling, do not overcome the limitations of geography and history.

Historically, Middle Eastern contingencies have been well-supported by ships based in Norfolk, Virginia, and Mayport, Florida. Four of the seven aircraft carriers that supported Operation Desert Storm in 1991 deployed from the East Coast. Throughout the protracted confrontation with Iraq that continued over the ensuing decade, the homeports of the deploying naval forces alternated between the U.S Atlantic and Pacific Fleet. While that seems to suggest that continuing the existing basing arrangements would adequately support the needs of Central Command, there are political developments that may affect the deployment calculus. The viability of a strategy based on existing deployment patterns could be dramatically altered should access to the Suez Canal change. 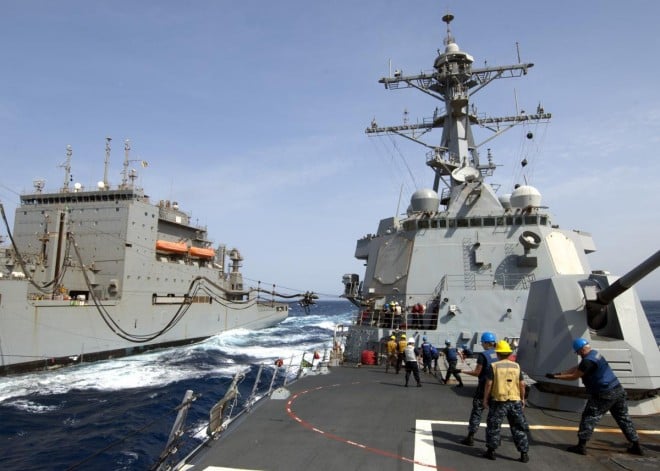 The rapid rate at which Norfolk-based assets can reach the Persian Gulf assumes an expeditious transit of the Suez Canal. Those assumptions must be challenged. The canal was closed between the 1967 and 1973. A resumption of active hostilities that might prevent the use of that particular sea lane may be unlikely, but political turmoil in Egypt may have a similar effect. Monday’s disturbance at the U.S. Embassy in Cairo and the assault on the U.S. Consulate in Benghazi, Libya, highlight the difficulties inherent in any contingency plans that require access to so vulnerable a choke point.

Geography is not immutable. Alfred Thayer Mahan, the great naval theorist of the turn of the 20th century, suggested that building a canal through Panama would transform the Caribbean and Gulf of Mexico from a backwater to a strategically vital artery. The converse is also true. The closing of a choke point could dramatically alter the strategic balance. Therein lies the problem with posturing naval forces along the Eastern Seaboard with the intent of deploying those forces to the Middle East. While the transit is faster today for Fleet Forces Command assets, denial of access to the Suez Canal changes the equation. Rather than the 24-day transit, the alternative route around the southern tip of Africa would require more time than deploying from the West Coast. The nature of those southern seas also exposes units transiting the area to slower speeds of advance and potential damage resulting from extreme conditions. The Cape of Good Hope has also been known as the Cape of Storms.

Closing the canal would be a drastic step indeed. Such an action would violate international norms, but then, so too does allowing citizens to invade the sovereign territory of an embassy. Egypt’s reliance upon revenue from the canal also provides a powerful argument against a potential closure of the waterway. All those factors must be weighed against the increasingly unsettled state of affairs in Egypt, in the broader Middle East, and globally. One of the enduring dilemmas in developing strategy is determining whether to plan based upon the intentions or upon the capabilities of other states. As a general rule of thumb, the more friendly and transparent a state is; the safer a strategist will be in shaping plans based upon intentions. Egypt is, at the moment, neither particularly friendly in posture nor particularly transparent in government actions. Planning for the Egyptian capability of closing the canal is safer than attempting to discern Egyptian intentions. This calls into question basing postures that assume continued access to Suez, uninterrupted and without condition.

It would be unwise to suggest dramatic reductions in the forces available to meet contingencies in the Atlantic Basin. The need to balance humanitarian assistance in the Western Hemisphere, counternarcotics operations, and the myriad potential scenarios in West Africa and the Gulf of Guinea all dictate a robust fleet in the Atlantic, but one with a different mix of capabilities when compared with the Pacific. None of these facts support an argument for reversing the recent trend of posturing assets with high-end capabilities in the Afro-Asian littoral and the Pacific.

The current disposition of U.S. naval assets is beginning to reflect the geopolitical realities. In 2006, at the height of the pre-surge violence in Iraq, the requirements of the Pacific Fleet dictated more days of deployed aircraft carrier presence in the Pacific Theater than in the Central Command area of operations. The trends have not changed. It is the nature of the requirement in each theater that should dictate the basing alignment. During World War II the need for major combatants—the capital-ship fleet of Mahanian theory—was focused in the Pacific. The naval mission in the Atlantic was no less critical, but the types of assets required there differed dramatically. The Atlantic was the theater of smaller combatants. Destroyers, destroyer escorts, and escort carriers dominated the battle space. The great clash of sea powers took place in the vast reaches of the Pacific. Today, the potential peer competitor resides on the eastern fringe of the Eurasian landmass. That should be the focus of combat power. The missions served by the forces based on the East Coast are different in nature. Today the major combatants must focus on Asia just as more of the capital ships of 1944 were deployed westward. The smaller vessels, more versatile owing to fewer limitations imposed by draft and logistic requirements, should focus on the unique attributes they bring to the problems of the Atlantic Basin and should be supported by a more limited strike force.

With fewer than 300 ships, it is crucial that the allocation of assets reflect the strategic realities. During the Cold War the then-Atlantic Fleet bore the brunt of the responsibility for countering the Soviet naval buildup. The naval threat was in the European Theater. During World War II the preponderance of naval combat power resided in the Pacific for that was the theater in which the adversary possessed a capital ship threat. What might be advisable is a re-examination of how different classes of ships are allocated between theaters and realigning homeports so that the capabilities of platforms better match theater requirements.