On the 11th anniversary of the attacks on the World Trade Center and Pentagon, al Qaeda affiliates staged a series of attacks against U.S. diplomatic missions in the Middle East. Inciting protests against the film, “Innocence of Muslims,” or possibly taking advantage of existing demonstrations, militants with alledged links to Al Qaeda burned the U.S. consulate in Benghazi, Libya, and killed Ambassador Christopher Stevens, Foreign Service information management officer Sean Smith and two contracted American security personnel. Within days, violent protests sprung up in over two dozen countries across the Muslim world. In Sana’a, Yemen, protestors forcibly entered the U.S. Embassy compound and burned the American flag, replacing it with a black flag bearing the Islamic shahada.

Since the Benghazi attack, Al Qaeda and Hezbollah have threatened U.S. personnel and facilities. In light of Ambassador Stevens’ death, and remembering the 52 Americans held hostage for 444 days by “protestors” in Iran, there is growing concern about the ability of Americans to protect themselves inside diplomatic missions. While Marines from Fleet Anti-Terrorist Security Teams (FAST) have been deployed to Yemen, questions remain as to why Marines or other U.S. military forces have not been sent to other embassies. Before we discuss the operational details of what U.S. forces are available, it is imperative that we understand the political context in which our military is used to protect U.S. diplomatic missions abroad. 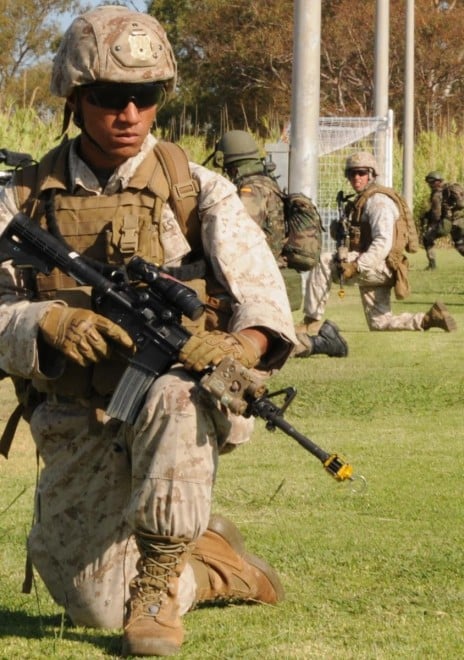 First, chiefs of mission, usually ambassadors, are the President’s personal representative to a given country. As such, the chief of mission has authority over every executive branch employee in that country except military personnel assigned to a theater commander. Also, according to the Department of State Foreign Affairs Manual, “The Secretary of State shall develop and implement policies and programs to provide for the safe and efficient evacuation of United States Government personnel, dependents, and private United States citizens when their lives are Endangered.” So, all activities related to diplomatic security and evacuation are under the purview of the State Department. Any U.S. military forces used to protect/evacuate diplomatic missions must be activated at the request and approval of both the secretary of State and the chief of mission.

Second, claims that violence against all U.S. diplomatic missions is equivalent to an attack against the U.S. homeland are false. The Vienna Convention on Diplomatic Relations of 1961 and the Vienna Convention on Consular Relations of 1963, lay out the legal frame work for diplomatic and consular relations between states. Article 22 declares diplomatic missions “inviolate and must not be entered by the host country except by permission of the head of the mission. Furthermore, the host country must protect the mission from intrusion or damage. The host country must never search the premises, nor seize its documents or property.” Article 29 protects diplomats from any form of arrest or detention. Article 27 requires host nations to permit free communication between diplomats and their home country while Article 9 allows a host nation to declare anyone, at any time, without explanation, persona non grata, and require that individual to leave. These key articles enable diplomats to conduct official business free or harassment or intimidation, by the host country or other actor, and compel the host country to protect the diplomatic mission. The conventions do not however, declare that diplomatic missions are sovereign territory.

Lethal force is authorized, by the Joint Chiefs of Staff “Standing Rules of Engagement” and widely accepted practice, to defend U.S. personnel from imminent danger of serious bodily harm or death as well as classified material of vital interest to the national security of the United States. The primary mission of the Marine security guards, who are under operational control of the ambassador and the Diplomatic Security Service, is to defend the latter while the former is a secondary role. Physical structures are not included in the Marine Embassy Security Group’s mission, so it is not reasonable to assert that lethal force be used against hundreds of civilians if their goal is physical destruction. Individuals armed with rocket-propelled grenades and machine guns can obviously pose a threat to both lives and structures simultaneously and it maybe impossible to determine their intent or, as it seems was the case with Ambassador Stevens, evacuate the embassy prior to its physical destruction. Lethal force decisions in that kind of situation lie with the chief of mission and the regional security officer.

Third, deployments of U.S. military forces into a sovereign nation require the permission of the host country. On 14 September 2012 news media reported that a Marine Corps FAST unit was en route to Sudan following an attack on the embassy in Khartoum. The next day, Sudanese Foreign Minister Ali Karti “declined to authorisze the deployment of these forces affirming Sudan’s ability to protect foreign diplomatic missions in Khartoum and reiterated the State’s obligation to protect its guests members of diplomatic missions.” Karti’s statement emphasized the provisions of the Vienna Convention as well as nation’s sovereignty as it pertains to foreign military forces. If a host nation is unable to protect a U.S. diplomatic mission, as was the case in Libya, and will not authorize U.S. military reinforcements, as we saw in Sudan, the United States can assert diplomatic pressure, evacuate, invade the country, or assume risks.

In the event the host nation’s government has collapsed or refuses to allow U.S. military forces to evacuate an embassy, the President can decide to invade the country. Marine Expeditionary Units (MEUs)—2,200 Marines comprising a reinforced infantry battalion, helicopter squadron, and logistics group—have evacuated several embassies under such conditions. With the adoption of the MV-22 Osprey, a single MEU, which is embarked on three Navy amphibious ships, could send reinforced rifle companies into multiple countries simultaneously in order to evacuate designated personnel. Sending in the Marines however, is a measure of last resort as was in the case in Sierra Leone, Liberia, and Somalia. Decisions to reinforce an embassy, to abandon it, or to use force in protecting it are balanced against U.S. interests and as long as classified material and personnel are protected, the President, secretary of State and chief of mission’s decisions should be respected in the same way that we give the benefit of the doubt to a military unit commander’s tactical decisions.

The events of Sept. 11, 2012 and Ambassador Stevens’ death do not mean the Department of State needs to change its procedures or decision making framework. U.S. embassies have been evacuated at least 20 times since 1979, the last year in which a U.S. ambassador was killed in the line of duty. Deploying hundreds of policemen, riot-control agents and various means of crowd control can be a significant burden on developing nations, yet they carry out the duties to which they have agreed via the Vienna Conventions and are successfully defending U.S. personnel in over two dozen countries currently experiencing civil unrest. The United States should never compromise on the safety of its personnel or material of national security, yet we must also understand that it is a dangerous world in which our enemies have a say. Overreacting to recent events and implementing unnecessary security measures may have worse consequences than not doing enough.

Billy Birdzell served two tours in Iraq as a USMC infantry officer and was a team leader with 3rd Marine Special Ops Bn. He is an MA candidate in Security Studies at Georgetown University.