After SEAD and air superiority, the intervening force would need to determine its safe zone’s size. Some, such as Fouad Ajami, seek to center safe zones on besieged cities, while proposals from Syrian opposition and Turkish policymakers suggest buffer zones on Syria’s borders. MIT doctoral candidate Brian Haggerty posits a safe zone and humanitarian corridor arrangement encompassing Idlib in the north to Homs in the south, Since Haggerty’s analysis, however, fighting has rapidly expanded in Syria’s largest city, Aleppo, also near the Turkish border. Protecting Aleppo and establishing humanitarian corridors there would only increase the logistical requirements from Haggerty’s initial analysis.

In Haggerty’s analysis, the roughly 17-mile range of Syria’s 130-mm M-46 towed gun, its most prevalent artillery piece, suggests at least a 19 mile radius exclusion zone around cities and corridor roadways. To interdict Syrian forces en route to exclusion zones, Haggerty postulates the creation of two engagement zones, each with a 28-mile radius. The northern zone would encompass Idlib province, with the southern one protecting Hama and Homs (insufficient overlap would likely require a third engagement zone to secure Aleppo).

Looking at the number of strike aircraft necessary to maintain 24-hour coverage of each engagement zone, Haggerty suggests ninety aircraft could ensure the ability to engage up to 64 emerging targets in a 15-minute window every four hours. For reference, a Syrian armored battalion would contain perhaps 27 potential targets. 90 aircraft, then, could guard against significant Syrian ground incursions. The Syrian army has roughly 200 battalion-sized elements. Though combat degradation and defection likely significantly reduced this number, it does not account for Syrian paramilitary groups, such as the Shabiha irregulars implicated in many of the war’s worst massacres.

For comparison, the daily sortie rate a month into NATO’s 1999 bombing campaign to protect Kosovo was 130. In Libya’s Operation Unified Protector, which began in late March and continued until October 2011, allied aircraft conducted just 45 sorties a day in support of Libya’s rebels. Indeed, 200 sorties a day might be a low estimate, as Haggerty acknowledges, as imperfect ISR, strikes against Syrian command and control capabilities, and punitive strikes on other regime targets could all increase the daily sortie average.

The disparity between regime and Free Syrian Army (FSA) conventional capabilities suggests the need for a high intensity air campaign. While the FSA has effectively demonstrated its ability to degrade Syrian combat power through guerrilla tactics, these rely on expanding or drawing conflict into civilian areas and major urban centers, which comes at a huge civilian price. Despite its lethal improvised explosive device capabilities, and the prospect of man-portable anti-armor weapons flowing into the country, the rebels’ limited access to armor and artillery preclude them from mounting a conventional defense that keeps fighting away far from Syrians’ homes.

In Bosnia, NATO’s 1995 airstrikes required an accompanying major offensive from Croatian ground forces (trained with help from American defense contractors) to eliminate the Serbian ground threat. Given the unlikelihood that the FSA can quantitatively or qualitatively match the Syrian government in conventional offensive power, and the absence of political will (or Syrian desire) for foreign ground troops, any Syrian safe zone would require several times more aircraft and sorties to adequately counter the Assad regime’s ground forces. 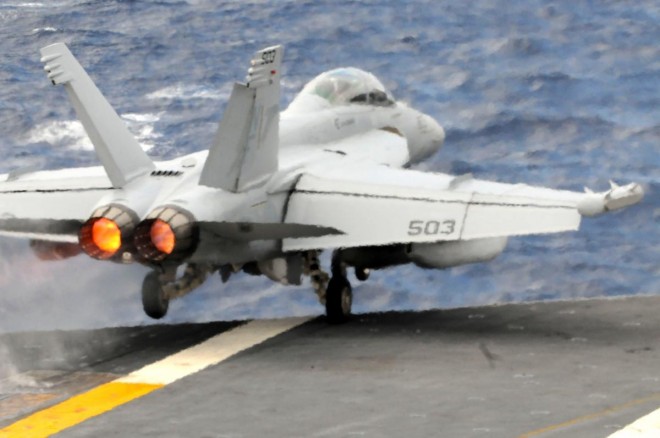 (June 3, 2012) An EA-18G Growler from the Shadowhawks of Electronic Attack Squadron (VAQ) 141 launches off the flight deck of the Navy’s forward-deployed aircraft carrier USS George Washington (CVN 73). Growlers would be an essieintal component of a Syrian air intervention.
U.S. Navy Photo.

History further suggests defending safe zones and supplying humanitarian corridors will require foreign ground forces. Despite the decades-old and battle-tested competence of the Kurdish peshmerga — militiamen who had fought against Saddam and each other — Operation Provide Comfort required a sizable ground commitment. America’s 24th Marine Expeditionary Unit, airborne troops from the U.S. and France, and U.S. and Italian special forces, alongside regular infantry, engineers, and other personnel all helped distribute aid and support the peshmerga. Beyond those humanitarian requirements would come special operations forces capable of providing the necessary targeting data and air control for ground interdiction. European and Arab states likely filled this role on a small scale in Libya, but given the much higher volume of sorties necessary, a larger contingent would prove necessary in Syrian operations.

Safe zones, despite their political appeal, are a significant military undertaking. Though Haggerty’s safe zone is hardly the guaranteed size in a notional intervention, the estimates he provides are instructive. Much like any effort to destroy Syria’s air defenses and knock out its air force, Haggerty’s estimated 200 sorties a day quadruples its Libyan equivalent, and still requires about six times as many aircraft. While the relatively less sophisticated requirements of ground interdiction could allow foreign air forces to play a greater role than in the initial SEAD effort, safe zones in Syria would likely pose the greatest military undertaking of its kind.