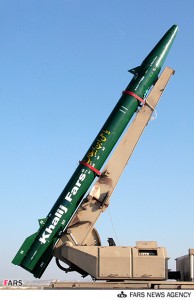 However, experts dismiss the claims as propaganda that exaggerates the capabilities of the Khalij Fars while underestimating the effectiveness of U.S. antimissile systems.

Rear Admiral Tom Marfiak, USN (Retired), the antiair warfare commander during Operation Desert Shield and Operation Desert Storm, believes that although the U.S. Navy is well equipped to take out incoming missiles no matter what their angle of approach, it would probably be easier to destroy the drones or aircraft that the Iranians would need to guide a missile such as the Kahlij Fars to a moving target.

“A key thing to keep in mind… if Iran were to decide to employ such a weapon against a U.S. Navy destroyer or cruiser, there would be immediate consequence,” said Marfiak. “There would likely be more than one U.S. combatant involved, so defense in depth is present. The [missile] battery would be a likely target, as would be any other launch facilities.”

“The Iranians are notorious for faking tests and camera footage, and for inventing entirely false but ingenious claims,” said Friedman.

He believes the missile is a prototype with no current capabilities other than to fool the Iranian public.

“The Iranians have to assure their own population that their defense will work, because if a panic sets in, the regime may collapse,” said Friedman. “It is already under considerable pressure due to economic trouble, not to mention anger over repression. You see constant statements in their press claiming that any attempt to attack Iran is doomed from the start

Eric Wertheim, author of Combat Fleets of the World, agrees.

“It is certainly in Iran’s best interest to advertise this weapon, but whether or not this is a true silver bullet capability remains highly uncertain -and probably unlikely,” said Wertheim. “By hyping its own military prowess, Iran hopes to intimidate potential adversaries while boosting the confidence of their own Iranian forces.”