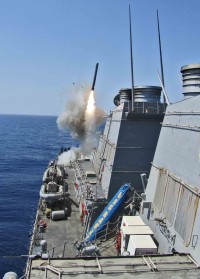 Roy Donelson, program director for Tomahawk at Raytheon, said the company marked the 500th successful Tomahawk operational test launch last year, in addition to some 2,000 combat launches since the missile entered the Fleet. The destroyer USS Barry (DDG-52) launched the 2,000th missile on 19 March 2011 during Operation Odyssey Dawn in support of the U.N. campaign in Libya. The guided-missile sub Florida (SSGN-728) launched 90 Tomahawks during Odyssey Dawn.

The Navy first fielded the Block IV “Tactical Tomahawk” upgrade in 2004, adding a two-way datalink and an eight-channel antijam global-positioning-system receiver (GPS had been introduced with Block III) to permit expanded in-flight control, including the ability to loiter, accept retargeting commands, and conduct damage assessment with an optical digital camera called the digital scene-mapping area correlator.

Donelson said a key upgrade introduced with Block IV is the capability, using the new onboard datalink, to maintain two-way communications with the missile and thereby control it during flight to its target. The Tactical Tomahawk weapon-control system (TTWCS) processes targeting data provided by remote sensors on satellites and aircraft, or by ship- or shore-based sensors, and communicates with the missile by means of the datalink. In a 2009 test, Tomahawk accepted live targeting data from a portable Joint Strike Planning and Execution Auto Router, or JSPEAR. Using the updated data, the TTWCS can redirect the missile to secondary targets selected during mission planning. The new GPS, Donelson said, has reduced the time needed for mission planning from about 80 hours for earlier Tomahawk variants to one hour for the Block IV missile.

The Fiscal Year 2012 contract award will purchase 361 Block 4 missiles, 238 for launch from the Mk-41 VLS, and 123 for submarines fitted out with the capsule-launch system. Donelson pointed out that Raytheon already is in full-rate production on Block IV missiles purchased with earlier contracts.

For the new offensive antisurface weapon, NAVAIR seeks to award Raytheon the work on integrating sensors, targeting-correlation algorithms, and weapons-capable radio subsystems on board the Block IV missile for deployment in the 2015 time frame. NAVAIR officials say that the new system would be a semi-autonomous weapon capable of detection, discrimination, and terminal guidance to a moving target.