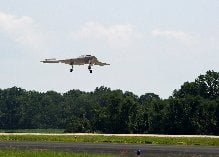 What does all this mean for the future carrier air wing? The Navy’s current plan is to deploy a mix of F/A-18 E/Fs, F-35Cs, EA-18 Growlers, and E-2D Hawkeye airborne surveillance aircraft. While not as “luxurious” a collection as the air wing of an earlier era—the A-7, A-6, F-14, EA-6B and S-3—these are all still relatively high-end vehicles. None was designed as a “truck.” Moreover, the operational effectiveness of the carrier air wing can be realized only when all the parts are employed together, which is still a relatively costly way of doing business. It is possible to hang advanced weapons and sensors on F/A-18s and F-35s but they are still relatively short-legged platforms and will require significant off-board intelligence, surveillance and reconnaissance (ISR) to successfully employ their long-range payloads.

A near-term challenge to implementation of a payloads-over-platforms strategy for the carrier air wing is the lack of advanced, long-range weapons and other systems. The Naval Aviation Vision expects follow-ups to the SLAM-ER, Harpoon and Tomahawk missiles somewhere around 2030. Even then, however, the majority of aircraft-delivered weapons will be relatively short-range joint standoff weapons, joint direct-attack munitions, laser-guided bombs, and small-diameter bombs. So it appears there will remain a requirement for a significant number of “luxury” platforms to deliver those weapons for at least the next two decades.

The only near-term opportunity the Navy has to break this pattern—deploying an Ford F-150 pickup instead of a Porsche or Lexus—is the unmanned carrier launched surveillance and strike system (UCLASS). Unfortunately, the Navy does not appear to have made up its mind as to what it wants in a UCLASS. Is it going to be a platform or a payload? If the former, how will the Navy balance the requirements for the ISR mission versus that of strike? The plan is to deploy no more than four per air wing, which suggests that the UCLASS will be relegated to missions that are long, boring and dangerous. That is likely to make for a narrow trade space between stealthiness, range, payload and performance.

Taken to the next level, the payload-over-platform approach would suggest a very different carrier air wing in the future. Manned platforms will be gone. The air wing will consist of two, possibly three, classes of unmanned aerial vehicles (UAVs). The first would be a highly stealthy, long-range vehicle able to carry a limited payload. This platform would be designed to conduct very challenging ISR and strike missions in an intense anti-access/area denial environment. The second class would be a relatively large, slow, non-stealthy “truck.” The truck would deploy an array of long-range weapons and sensors. The third class might be a large vertical-launch-and-recovery UAV that would replace current and planned vertical lift platforms.

If the next generation of surface combatants also reflects the payloads-over-platforms design philosophy they then may be repositories for most of a battle group’s weapons, obviating the need to deploy them on the larger of the two carrier-based UAVs. Complementing the two classes of carrier-based UAVs would be other types, launched and recovered by surface combatants and even submarines. Those could perform close-in missions such as battle-group air defense, antisubmarine warfare and electronic combat.

Ultimately, the argument for payloads over platforms would seem to overtake not just an air wing based on “luxury” aircraft but the carrier itself. The current Chinese DF-21 threat is likely to be just the first of many based on long-range sensors, weapons and unmanned platforms. By extension, payloads over platforms should mean the end of the nuclear-powered aircraft carrier.