Big surprises often come in small packages and the Islamic Republic of Iran Navy (IRIN) seems to be betting on this adage with its accelerated acquisition of midget submarines in recent years. Open-source reporting indicates that Iran now possesses at least 14 Yono-class mini-submarines. Iranians say these North Korean-designed boats are now being indigenously manufactured in their domestic shipyards. Called the Ghadir-class, production has accelerated since the reported launch of the first Iranian-manufactured unit in 2007 with four of these units launched in 2010 and, according to Jane’s Fighting Ships, another two were launched in the past year. 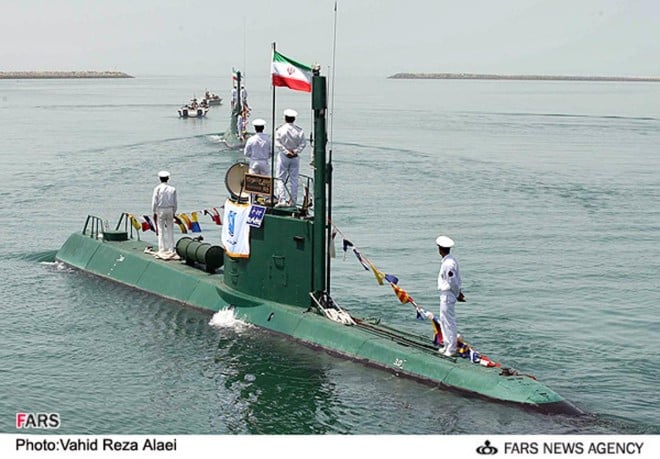 The lethal threat loaded in this small package is illustrated by the March 2010 attack on the South Korean corvette Cheonan. The North Korean torpedo attack on the Cheonan broke the ship in half and killed 46 ROK sailors. Forensic evidence, provided by an international team of weapons experts, subsequently revealed that it was a North Korean manufactured CHT-02D acoustic-wake homing torpedo that was used to sink the South Korean ship. The connection to the threat from Iran’s Yono submarines is that many analysts suspect that it was a North Korean Yono mini-sub that launched the attack on the Cheonan. Each North Korean Yono mini-sub is believed to be armed with two such CHT-02D (21-inch) heavy weight torpedoes. It is likely the Iranian Yono units are likely to be armed with the same type of torpedoes.
The IRIN also has three relatively modern, Russian-built, Kilo-class submarines that were purchased in the 1990s. However, the recent emphasis on mini-subs may indicate either a shift in tactics and/or dissatisfaction with the Kilos. The cost, or size and complexity of the Kilos may have caused the IRIN and Islamic Republic of Iran Revolutionary Guard Navy force to seek a more reliable and tactically compatible alternative. The Yono mini-sub is by all observations better matched to the challenging conditions for submarine operations in the gulf than the much larger Kilos. Just as the North Koreans have found the utility of mini-subs in the shallow waters of the Yellow Sea, the Iranians seem to be following suit in the Persian Gulf.

Iran seems to be putting their money where its mouth is when it comes to procurement. By all appearances its investments are matching its naval strategy of waging a guerrilla war at sea. For instance, the procurement of the Yono class boats is paralleled by reported investments in anti-ship cruise missiles, sea mines and the modification of hundreds of fast attack craft/fast inshore attack craft armed with a wide variety of antiship weapons. The ambush tactics for which the mini-sub is designed seem to fit the pattern of recent Iranian weapons procurement and their expressed interest in building a robust anti-access/area denial capability. The relatively short range and endurance of the Yono-class boats makes these units compatible with the Iranian Navy’s coastal defense mission and their presence puts teeth into Iran’s claims to being able to close the vital Strait of Hormuz. It is also noteworthy that as a less than capital asset, these platforms are potentially more expendable than a high value asset like a Kilo submarine. The proliferation of these units, like that of their mini-warship FAC/FIAC cousins, suggests that the Iranian Navy may be willing to lose a few of these units in defense of the nation.

The proliferation of these units presents a number of tactical challenges to the US Navy. As with FAC/FIAC, there is a definite tactical quality to quantity. The sheer number of small but lethal threats that have to be considered when operating in the Persian Gulf, when added up, creates an overall high threat environment. Just like FAC/FIAC, only one Yono needs to slip through a friendly force defensive perimeter and get within torpedo range to possibly achieve success. The threat to friendly vessels is further exacerbated when operating within the confines of the Persian Gulf where, in most areas, the threat axis represents a 360 spin of the compass. Further complicating the problem for blue forces is the inherent difficulty in detecting these small targets amidst the flotsam and jetsam of the cluttered Persian Gulf waters. One conclusion is certain–the development of squadrons of mini-subs and FAC/FIAC are a warning sign that asymmetric threats are on the upswing in the Persian Gulf.