The Navy’s first littoral combat ship — USS Freedom (LCS-1) — has suffered a maintenance issue forcing it back to port during its first extended underway from Singapore, according to reports from Defense News and Aviation Week. END_OF_DOCUMENT_TOKEN_TO_BE_REPLACED

In the next year the Navy will begin competition for the follow on sonar and surface-to-surface missile system for the Anti-Submarine Warfare (ASW) and Surface Warfare (SuW) mission packages of the Littoral Combat Ship, Capt. John Ailes, head of the LCS mission module program for Naval Sea Systems Command said at a briefing at the Navy League Sea Air Space Exposition 2013 at National Harbor, Md. END_OF_DOCUMENT_TOKEN_TO_BE_REPLACED 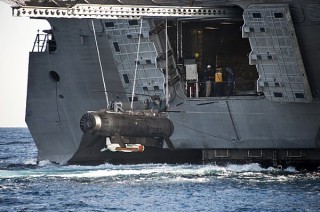 The way the U.S. Navy is buying the mission modules planned for the Littoral Combat Ship could lead to cost increases, according to a Government Accountability Office report released on Thursday. END_OF_DOCUMENT_TOKEN_TO_BE_REPLACED

Christopher P. Cavas’ much-discussed March, 18 Defense News story about the recommendations of Vice Adm. Tom Copeman revealed that even one of the Navy’s top surface warriors has become something of a littoral combat ship (LCS) skeptic, given his reported willingness to recommend a major course correction for the program.
The Navy’s LCS never has had a shortage of skeptics, but for a long time they seemed to be a minority in the surface-warfare world, on the outside looking in. Until now. END_OF_DOCUMENT_TOKEN_TO_BE_REPLACED

Capt. Kenneth Coleman knows more about the Littoral Combat Ship program than most any sailor. Currently Coleman works at U.S. Surface Forces as requirements officer for the LCS program and from April 2010 to Sept. 2011, he was the commander of the Blue crew of USS Independence (LCS-2). USNI News recently interviewed Coleman on the latest of the deployment of USS Freedom (LCS-1). Coleman discussed manning changes for the ship, how the ships will be maintained while deployed and what it’s like for a ship commander to do his own dishes. END_OF_DOCUMENT_TOKEN_TO_BE_REPLACED 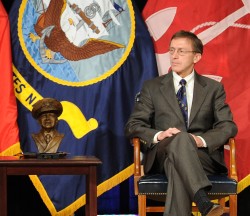 The U.S. Navy’s chief shipbuilder is defending Monday’s $1.4 billion awards for the next four Littoral Combat Ships (LCS) in the midst of the current congressional battle over military funding, the service told USNI News on Monday. END_OF_DOCUMENT_TOKEN_TO_BE_REPLACED

Proceedings, September 2012
In a series of 1990s simulations, the LCS concept was born; the Strait of Hormuz was the hypothetical scenario, and ‘the fight against sea and shore’ became the mantra. 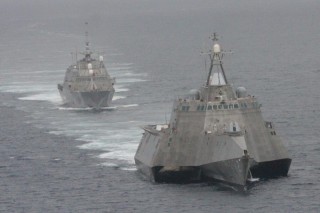 The recent findings of the Perez Report and related coverage in Defense News enumerated significant problems with the Littoral Combat Ship (LCS). It therefore seems worthwhile at this point to take a look at how the LCS was conceived and ask, “Is it up to the tasks it could soon face?”

In the mid-1990s, the Navy conducted a series of war games in which the LCS concept was born. The wargaming process was called the Joint Multi-Warfare Analytical Game (JMAG). The computer models included all areas of joint forces: command-and-control, intelligence, environment, political-military actions, land warfare, air warfare, sea warfare (including antiair, antisurface, antisubmarine, mine warfare and mine countermeasures), and special warfare. JMAG employed experienced subject-matter experts (SMEs) at the flag/general level in all the services for “Blue” and “Red” forces.