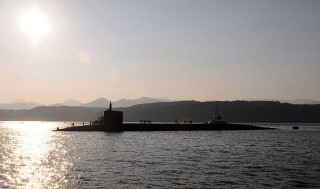 Ohio-Class Replacement nuclear ballistic missile submarine “is the right ship to operate in 2080” with construction scheduled to begin in 2021, the director of the Navy’s undersea warfare division told attendees during a panel discussion of future nuclear deterrence at the Navy League’s Sea-Air-Space Exposition 2013 at National Harbor, Md. END_OF_DOCUMENT_TOKEN_TO_BE_REPLACED