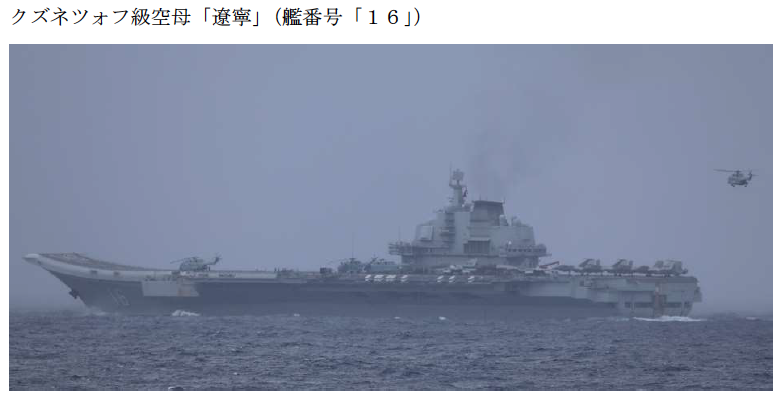 The Russian Navy and the People’s Liberation Army Navy (PLAN) are exercising in the East China Sea while the PLAN Liaoning Carrier Strike Group continues operating in the Philippine Sea.

On Wednesday, the Joint Staff Office of Japan’s Ministry of Defense said on a Russian Navy cruiser, destroyer and two corvettes were sighted Tuesday, sailing southwest in an area 50 miles northeast of Tsushima. The group included cruiser RFS Varyag (011), destroyer RFS Marshal Shaposhnikov (543) and corvettes RFS Sovershennyy (333) and RFS Hero of the Russian Federation Aldar Tsydenzhapov (339), all part of the Russian Navy’s Pacific Fleet. The release added that the four ships sailed southwest through the Tsushima Strait into the East China Sea from Tuesday to Wednesday. The Russian ships were monitored by the Japan Maritime Self Defense Force (JMSDF) fast attack craft JS Shirataka (PG-829) and JMSDF P-1s maritime patrol aircraft of Fleet Air Wing 4 based at Naval Air Facility Atsugi, Honshu.

The four Russian Navy ships were traveling to rendezvous with PLAN ships for the Russia-China Joint Sea 2022, a series of joint exercises in the East China Sea that has been carried out by the two countries since 2012. This year’s iteration is taking place from Dec. 21 to 27. 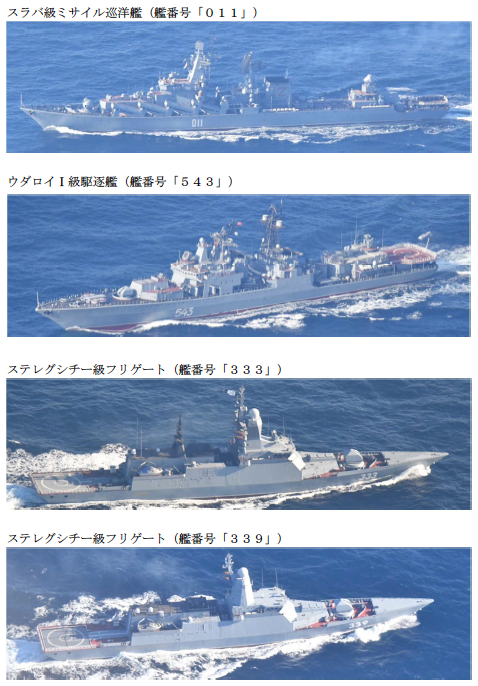 Russian replenishment ship Pechanga is also taking part in the exercise, according to a release by China’s Ministry of National Defense. The PLAN is deploying the destroyers CNS Baotou (133) and CNS Jinan (152), frigates CNS Binzhou (515) and Yancheng (546), replenishment ship CNS Gaoyouhu (966) and a submarine along with airborne early warning and control aircraft and maritime patrol aircraft. The drills will encompass a wide range of maritime warfare activities along with live firing. Last year in October, both navies conducted joint drills along with jointly sailing in international waters off the west coast of the main Japanese island of Honshu.

The JSO release stated that during this period in the day, a total of 60 fighter aircraft launches, flights and recoveries were conducted along with 70 take-offs, flights and landings by helicopters on Liaoning. The release stated that destroyer JS Kirisame (DD-104) shadowed the PLAN CSG and Japan Air Self Defense Force (JASDF) fighter aircraft were scrambled in response to the carrier’s fighter activity. Kirisame has been shadowing the PLAN CSG since December 16 when it was sighted in the East China Sea.

On Friday, the JSO issued a release with the following table for Wednesday and Thursday’s activity by the PLAN CSG.

The release stated that for the two days in daytime, 50 fighter aircraft launches, flights and recoveries were conducted along with 20 take-offs, flight and landings by helicopters on Liaoning. The release stated that PLAN CSG was monitored by Kirisame along with the destroyer helicopter carrier JS Izumo (DDH-183) and JASDF fighter aircraft were scrambled in response to Liaoning’s fighter activity.

A PLAN destroyer is operating near the Exclusive Economic Zone of French Polynesia, according to a social media post by the French Pacific Command on Friday, which posted photos taken by a French Navy Falcon 200 Guardian maritime surveillance aircraft. The hull number of the PLAN destroyer identifies it as CNS Yinchuan (175).

#FAPF | The mission of the F200 is to provide situational awareness and contribute to the security of our EEZ. During a surveillance patrol, one of our F200 established contact with a Chinese destroyer transiting near French Polynesia EEZ. pic.twitter.com/ee9nbjoPPq

Aircraft carrier USS Nimitz (CVN-68) is operating in the Philippine Sea, as well, according to a Tuesday JMSDF release. On Monday, JMSDF P-1s conducted tactical and interoperability exercises with Nimitz and its embarked aircraft along with U.S. Navy P-8A Poseidon MPAs and U.S. Air Force (USAF) B-52 bombers. The release stated that the exercise took place in the sea area from the south of Iwo Jima to the east of Guam.

On Wednesday in Indonesia, the U.S. Navy and the Indonesian Navy concluded Cooperation Afloat Readiness and Training (CARAT)/Marine Exercise (MAREX) Indonesia 2022, according to a U.S. 7th Fleet release.