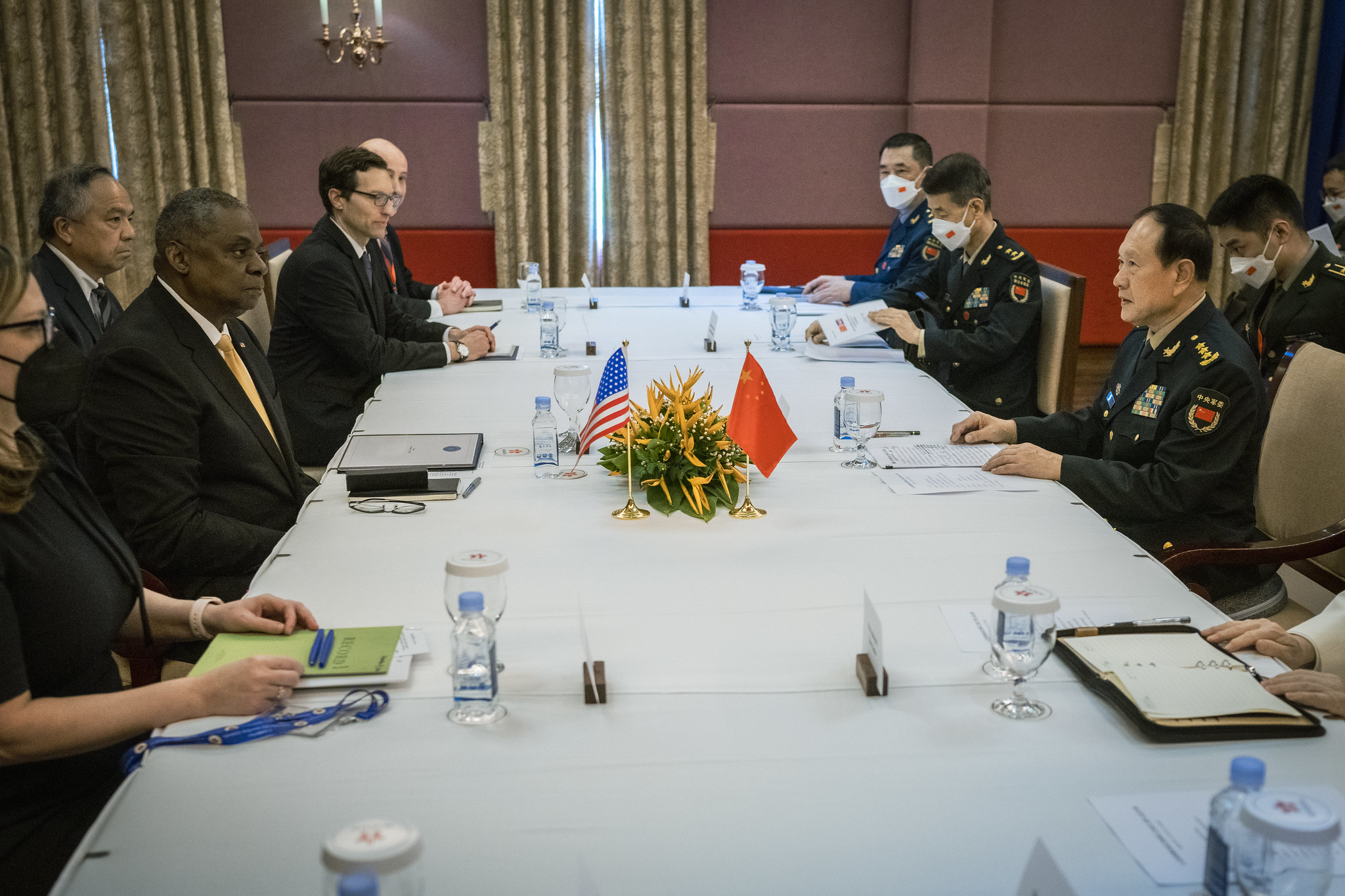 Secretary of Defense Lloyd Austin emphasized the need to keep open lines of communication and responsibly manage competition in his meeting this week with China’s Minister of National Defense Gen. Wei Fenghe.

Austin met with Wei on the margins of the Association of Southeast Asia Nations (ASEAN) Defense Ministers Meeting-Plus (ADMM-Plus) in Siem Reap, Cambodia. Both defense chiefs last met in June in Singapore during the Shangri-La Dialogue.

Austin and Wei discussed U.S.-China defense relations and regional and global security issues and Austin emphasized the need to responsibly manage competition, according to a Pentagon readout on the meeting.

The U.S. defense chief also brought up the importance of substantive dialogue on reducing strategic risk, improving crisis communications and enhancing operational safety. He raised concerns about the increasingly dangerous behavior demonstrated by People’s Liberation Army (PLA) aircraft in the Indo-Pacific region that increases the risk of an accident, according to the readout. The United States will continue to fly, sail and operate wherever international law allows, Austin said.

During the meeting, Austin discussed Russia’s war against Ukraine and expressed concerns about recent provocations from the Democratic People’s Republic of Korea (DPRK). He called on the PRC to fully enforce existing U.N. Security Council resolutions regarding the DPRK’s unlawful weapons programs.

The U.S. defense chief told Wei that the United States remains committed to the longstanding one China policy, which is guided by the Taiwan Relations Act, the Three U.S.-China Joint Communiques and the Six Assurances. Austin spoke about the importance of peace and stability across the Taiwan Strait and underscored his opposition to unilateral changes to the status quo and called on the PRC to refrain from further destabilizing actions toward Taiwan, according to the release.

China’s Ministry of National Defense also issued a release on the meeting stating that Wei stressed that the Taiwan question is at the very core of China’s core interests and is the first red line that must not be crossed in China-U.S. relations.

“Taiwan is China’s Taiwan. The settlement of the Taiwan question is the Chinese people’s own affair, and no external force has the right to interfere. The Chinese armed forces have the backbone, resolve, confidence and capability to resolutely safeguard the national reunification” according to the release.

During the talks, both sides agreed that the two militaries should implement the consensus reached by the two heads of state, maintain communication and contact, strengthen crisis management and control and strive to maintain regional security and stability, according to the release. The two sides also exchanged views on international and regional situations, the Ukraine crisis, the South China Sea and the Korean Peninsula issues.

The ADMM-Plus is a platform for ASEAN and its eight Dialogue Partners Australia, China, India, Japan, New Zealand, Republic of Korea, Russia and the United States (collectively referred to as the “Plus Countries”), to strengthen security and defence cooperation for peace, stability, and development in the region with the main meeting between the defence chiefs of the countries taking place on Wednesday. Cambodia as the current chair of ASEAN is the host for the event.

While the secretary of defense met with his Chinese counterpart, Vice President Kamala Harris visited the Philippines where she reiterated the U.S. commitment to the country.

Harris told Philippine President Ferdinand Marcos Jr. that the U.S. stands with the Philippines in defense of international rules and norms as it relates to the South China Sea during her opening remarks on Monday.

An armed attack on the Philippines Armed Forces, public vessels or aircraft in the South China Sea would invoke U.S. mutual defense commitments, “and that is an unwavering commitment that we have to the Philippines,” Harris said, echoing similar remarks made by Secretary of State Anthony Blinken in July this year.

On Tuesday, the vice president visited the Philippine island of Palawan, which lies around 320 km from the disputed Spratly Islands, which is claimed by Brunei, China, the Philippines, Malaysia, Taiwan and Vietnam. With the exception of Brunei, all the claimants maintained military stations on their claims in the area, with China expanding the capabilities of its military stations there in recent years. Harris conducted engagements with the fishing community, local officials and the Philippine Coast Guard in Palawan.

In a speech aboard the Philippine Coast Guard (PCG) patrol vessel BRP Teresa Magbanua (MRRV-9701), the vice president repeated the U.S. commitment to the Philippines, saying that as an ally, the United States stands with the Philippines in the face of intimidation and coercion in the South China Sea.

“We must stand up for principles such as respect for sovereignty and territorial integrity, unimpeded lawful commerce, the peaceful resolution of disputes, and the freedom of navigation and overflight in the South China Sea, and throughout the Indo-Pacific,” Harris said.

The vice president also stated that the United States supported the 2016 ruling of the United Nations Arbitral Tribunal which “ firmly rejected China’s expansive South China Sea maritime claims,” adding that the tribunal’s decision was binding and must be respected. The United States will continue to rally its allies and partners against unlawful and irresponsible behavior and that when the international rules based order is threatened somewhere, it is threatened everywhere, Harris said.

Among the initiatives was the provision of $7.5 million in additional assistance to enhance the capabilities of Philippine maritime law enforcement agencies and that the U.S. Trade and Development Agency, pending Congressional notification, will support the Philippine Coast Guard in upgrading and expanding its vessel traffic management system (VTMS) to enable improved maritime safety and environmental monitoring, according to a White House release.

On Sunday, the White House issued a release about the new Enhanced Defence Cooperation Agreement (ECDA) locations that had been identified to enable the United States and the Philippines to continue to work together towards achieving the agreed objectives under EDCA.

Armed Forces of the Philippines (AFP) Chief Lieutenant General Bartolome Vicente Bacarro said in an interview with Philippine news channel GMA Network on Nov. 14 that the AFP had identified five sites for the additional EDCA facilities with two sites being in Cagayan, and one each in Palawan, Zambales and Isabela.