Aluminum—a lightweight, ductile, malleable, and corrosion-resistant metal—is a major component used in a wide range of consumer, industrial, and technological goods, including aircraft, building materials, motor vehicles, and several types of defense and military equipment. The aluminum industry comprises three segments: upstream, secondary or recycled, and downstream. The upstream sector consists of mining bauxite, refining it to produce alumina, and smelting it to yield primary aluminum. Secondary aluminum is derived from recycled scrap metal. The downstream sector uses both primary and secondary aluminum to produce a variety of aluminum products. 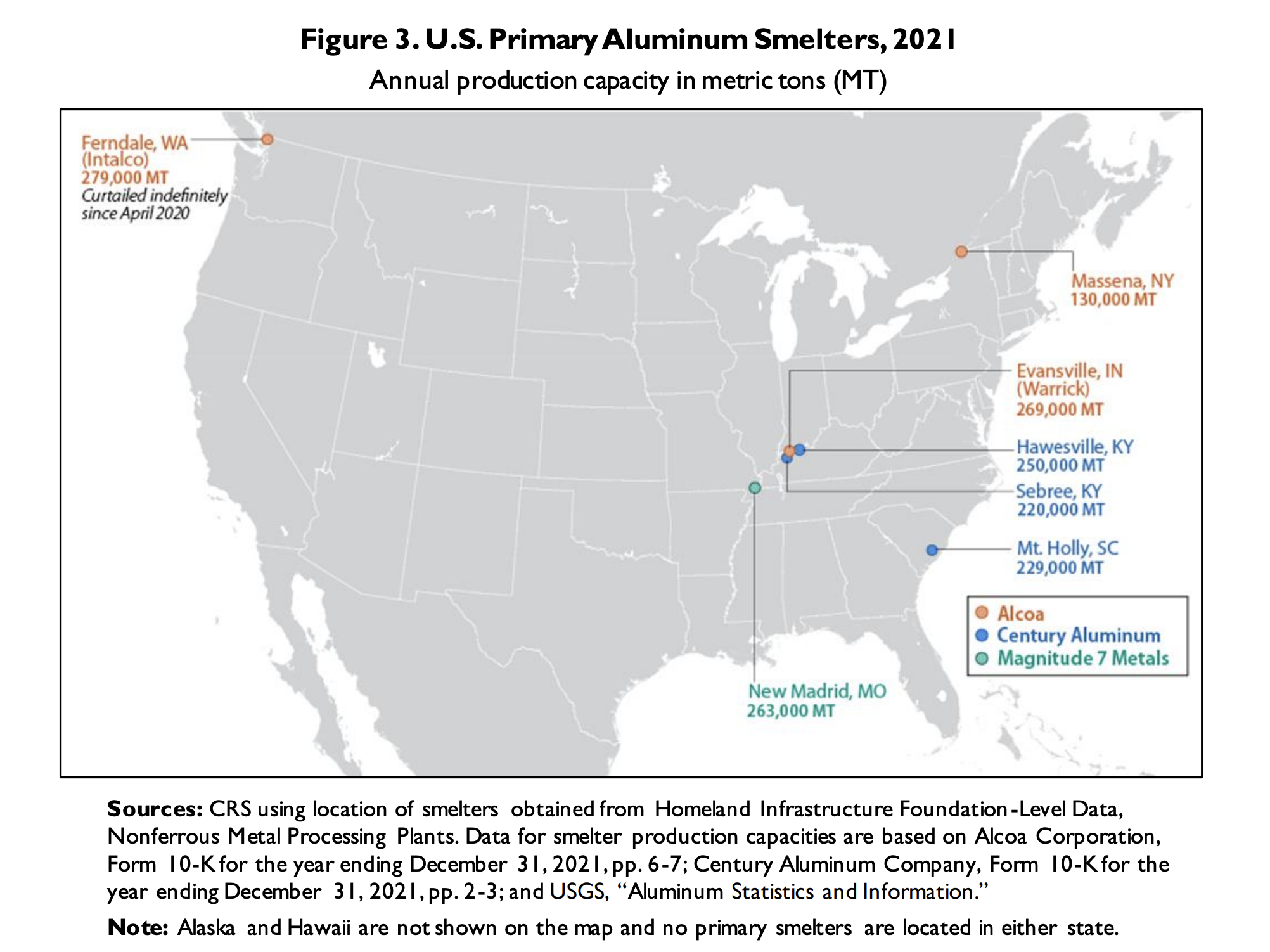 Secondary aluminum often has significant impurities, as it is derived from recycled products or scrap. Thus, manufacturers of components used in electronics and aerospace manufacturing often favor primary aluminum meeting specified purity standards. Many defense-related products must comply with particularly high purity standards. At present, the United States has one active smelter that produces aluminum of sufficient purity for use in military aircraft, as well as lightweight armor plating found in many defense ground and weapon systems. The greatest aluminum-related security concern regarding defense requirements appears to be the domestic availability of specific high-purity aluminum alloys, which can be derived from primary aluminum.

The U.S. and Canadian aluminum industries are highly integrated, as each market is a major trading partner of the other across the aluminum value chain. In 2021, more than 75% of Canadian production went to the United States, while roughly half of U.S. downstream products were exported to Canada. U.S. primary aluminum smelters operated at 55% of the industry’s rated production capacity in 2021, compared with 95% in Canada and 88% globally. Over half of global primary aluminum smelting capacity is in China, which has become the world’s leading producer in most segments of the aluminum value chain over the past two decades.

Excess capacity in the aluminum sector has been a growing concern for domestic producers. The Organisation for Economic Co-operation and Development found that the global aluminum industry received up to $70 billion in government support between 2013 and 2017, with the large majority of support concentrated in China and countries of the Gulf Cooperation Council.

In addition to being an energy-intensive process, aluminum manufacturing contributes approximately 2% to global greenhouse gases (GHG), equivalent to roughly 1.1 billion tons of carbon dioxide. More than half of GHG emissions related to aluminum manufacturing come from the generation of electricity used in primary aluminum smelting. A transition to carbon-neutral aluminum is likely to require significant capital investment in decarbonizing the electrical grid and in specific technologies used in primary smelting and recycling. P.L. 117-169 (commonly referred to as the Inflation Reduction Act of 2022), signed into law on August 16, 2022, established the Advanced Industrial Facilities Deployment Program in which the Department of Energy is expected to provide financial assistance to producers and production facilities of a variety of heavy manufacturing industries, including aluminum, that use advance technologies in manufacturing processes that effectively reduce GHG emissions. This could incentivize producers to invest further in decarbonizing specific production assets in aluminum manufacturing.