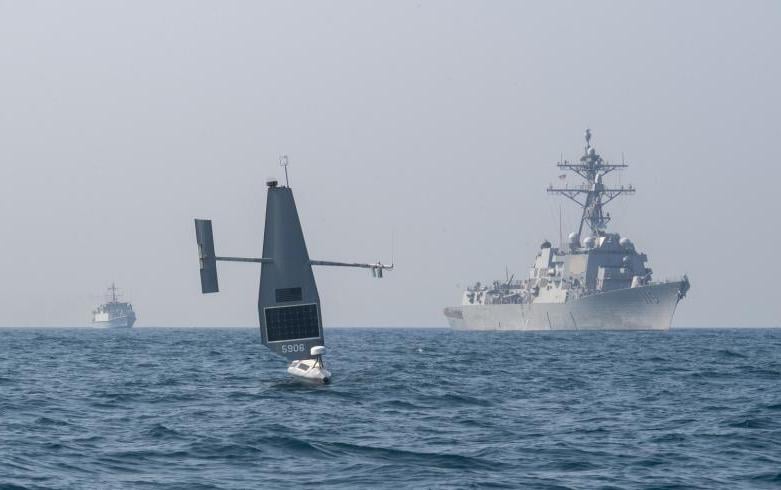 The Navy is thinking about artificial intelligence in two ways: the infrastructure to make unmanned systems work and technology meant to enhance how sailor and their commanders make decisions, a panel of technical and policy experts said Tuesday.

The output provided by AI is there help the human or supplement manned operations with unmanned assets, said Brett Vaughan, Navy Chief AI Officer, speaking at the U.S. Naval Institute on Tuesday. A human will always be in the loop and play a central role.

“By and large, the AI is there to augment and provide a human decision maker a range of options and recommendations,” Vaughan said.

That’s not to say there are not some decisions the AI system could make, he said. There are situations with unmanned vessels, such as going around a seamount, that the AI can make without needing a human, Vaughan said.

“That just shows you when we talk about offloading or delegating decisions there’s a sliding scale we have to be cognizant of, that’s got to appear in your calculus,” Vaughan said. “That’s where the perspective of the human being helped or the customer, the warfighter, sailor, Marine is important in the design of the code and the capability.”

The Pentagon’s goal for AI is to use it to achieve a competitive advantage, said retired Lt. Gen Michael Groen, former director of the Joint Artificial Intelligence Center.

“How do we gain competitive advantage against China, against any of our other opponents and be able to operate with tempo and with precision,” Groen said. “And so this is the real core of what we’re trying to build here today.”

Right now, in the DoD, this looks like pattern recognition and algorithms, as an example, which can help streamline processes or decisions.

Already, civilians and the military are used to using AI, he said. Take cars as an example. AI algorithms help a car monitor fuel levels or tire pressure. The same with navigation apps that adjust to say how much traffic is on a route or where one can stop for coffee.

For the military, AI can help show commanders additional opportunities or risks, just like the navigation apps might suggest a different route depending on traffic.

Vaughan’s office never starts with AI, but rather looks at the problem or challenge first and then brings in AI to help address it, if AI is the right tool needed. He currently oversees about 1,000 AI-related projects.

Using AI is going to require the Navy to recalibrate how it does business, he said.

It is different than building hardware like ships, where they are built, go out and come back for repairs. AI requires constant monitoring and verification to make sure the system works properly.

The U.S. is not the only country looking to use AI with its military. Both China and Russia are using AI already, said Sam Tangredi, a professor of national, naval, and maritime strategy at the U.S. Naval War College.

China has said that it wants to be an AI leader, he said, something they could achieve because the country wants to use AI for different reasons.

“They want it for social control, for control of the populace by the Chinese Communist Party. Great incentives to spend a lot of money on it,” Tangredi said.

Russia looks to use AI for autonomy so it can supplement its force, he said.
The U.S. on the other hand is focused on keeping the human in the loop, Tangredi said.

The Chinese are good at human surveillance, Groen said, but it is a question of if Beijing can convert that into a warfighting capability. China has also been interested in AI as a tool for battlefield commanders as a counter to the U.S. operations in the Western Pacific, reported USNI News last year.

“It is necessary to assist command on the battlefield by establishing a wargaming system that can rigorously reflect reality to train an AI system that can deal with distributed lethality,” reads a 2020 Marine Design & Research Institute of China (MARIC).

How well the Chinese can execute on their goals is still an open question, Groen said

“Can they innovate? And then can we innovate faster?” he said. “Can we innovate enough and organize ourselves enough so that we actually have the enterprise that can fight effectively against an opponent that is largely organized, not innovative?”