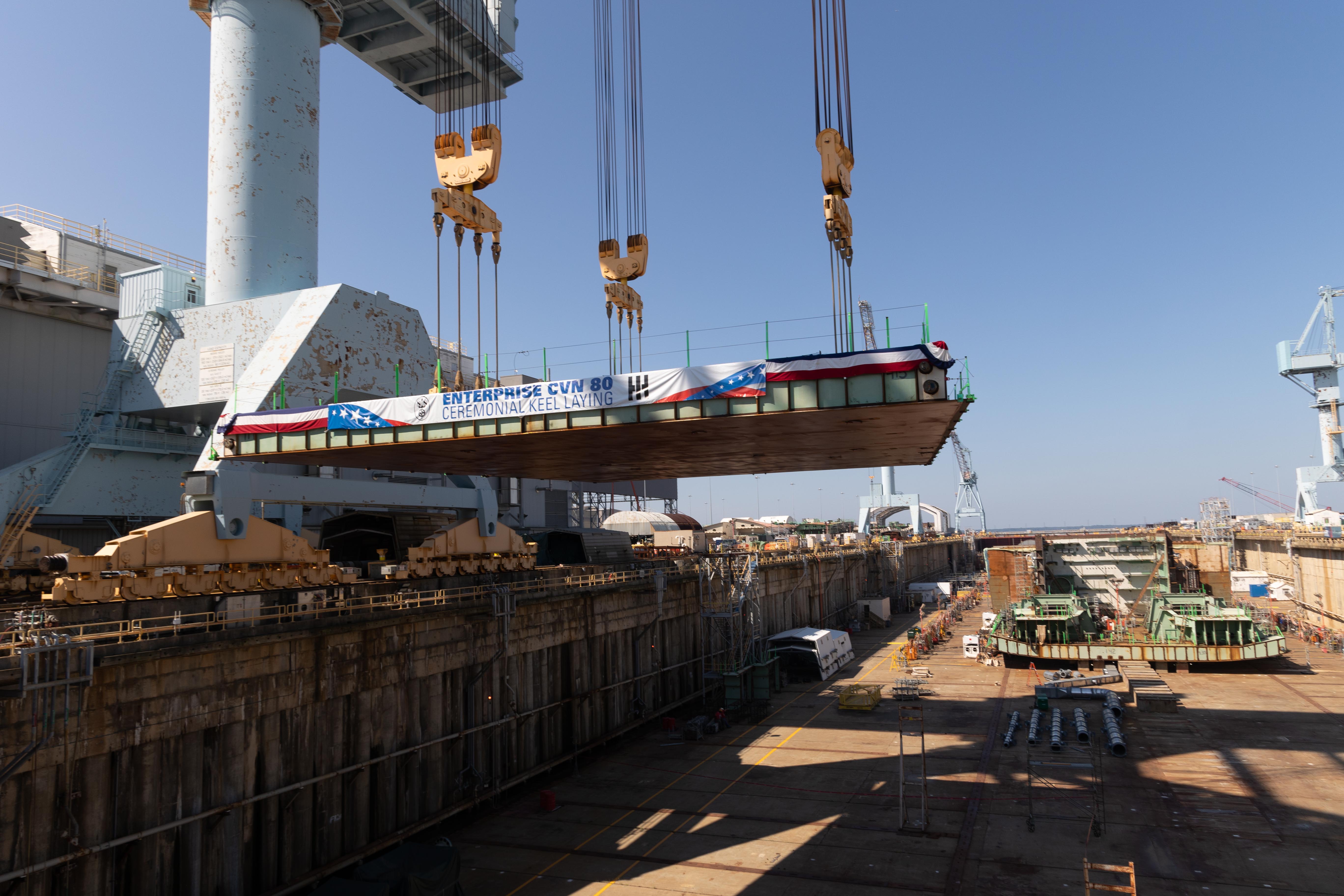 NEWPORT NEWS, Va. – Fatima Medina-Galeno might be one of the few naval shipbuilders in the United States who needs a solid Wi-Fi signal to get her job done. In addition to her steel-toed boots and her hardhat, Medina-Galeno lugs a rugged, dust-covered laptop on the job.

At the start of each shift, she downloads the work package for the day – a three-dimensional model of the pipe sections she’s assigned to install in a steel module that eventually will become aircraft carrier Enterprise (CVN-80).

Medina-Galeno asks fewer questions because she can see and manipulate the model by zooming in on an angle placement or rotating the view to get a better sense of how the pipes fit together, she told USNI News on Friday.

She learned on paper plans at Newport News Shipbuilding training school, but the laptop makes her life easier, even though it weighs nearly 10 pounds, she said.

“It doesn’t weigh as much as my toolbox,” she told USNI News.

Medina-Galeno’s day-to-day digital world is one reason the Navy and Newport News say the yard has kept largely on schedule for Enterprise’s 2028 contract delivery despite other delays due to the COVID-19 pandemic.

“Everything [in the yard] today was built by mechanics using laptops or tablets. For the first time in our history, and I believe in the Navy’s history, the ship isn’t just designed in a 3D [computer-aided design] tool but now we’re taking that 3D information and putting it onto a digital device and allowing our shipbuilders to build with that,” Ford-class program vice president Brian Fields told reporters on Friday.
“It gives our shipbuilders the opportunity to understand visually what they’re supposed to be doing. And why that’s so important is that with the amount of new shipbuilders that we’re bringing into the company now and over the next five or 10 years, we see that their time to proficiency is collapsing, we’re able to give them harder jobs without the same oversight because they know what’s being asked.”

The yard laid the keel of what will be the Navy’s Enterprise in April, USNI News reported, by placing the first of more than 300 modules that will make up the carrier in the drydock at Newport News.

As Enterprise begins to come together, Newport News Shipbuilding and parent HII are mounting a case for the service to purchase the next two Ford-class aircraft carriers – CVN-82 and CVN-83 – in a block buy contract.

Since the start of the Ford program, Newport News has invested $1 billion in capital expenditures at its yard by the James River to improve it for the carrier construction, with the infrastructure for digital plans a major part of the spend.

“[Enterprise] is the first digital aircraft carrier and the part of a two-shipset buy. When you think about a two-aircraft carrier buy, there’s significant savings,” HII’s CEO Christopher Kastner told reporters on Friday.
“Think about what happened with the world with inflation. We were able to place the vast majority of the orders for 81 before inflation hit.”

The arrangement would follow the 2019 two-carrier buy for Enterprise and Doris Miller (CVN-81) for an estimated $24 billion compared to the $28 billion the Navy said it would spend buying the carriers separately, USNI News reported at the time. The initial two-carrier block buy was paired with a Trump administration proposal to decommission USS Harry S. Truman (CVN-75). Congress rejected losing Truman as part of the Fiscal Year 2020 budget deliberations.

Internally, the Navy has determined that a two-carrier buy for CVN-82 and 83 is the most cost-effective way to keep the Ford class going, Capt. Brain Metcalf, the Navy program manager for the Ford program, told reporters on Friday.

“We’ve sent [the Office of the Secretary of Defense] several scenarios. The scenario that we believe is optimal is two ships built over eight years on four-year centers with the three years of advanced procurement funding,” Metcalf said.
“Typically, we’ve gotten two years, we’ve learned now that we probably need about three years … lead times have gone up nationwide.”

Congress isn’t sold on the carrier math, yet. There’s a proposal in the House version of Fiscal Year 2023 National Defense Authorization Act directing the Navy to report on a combination of single carrier and dual-carrier buys without committing to a single acquisition strategy. The House authorization bill wants a report from the service by February. 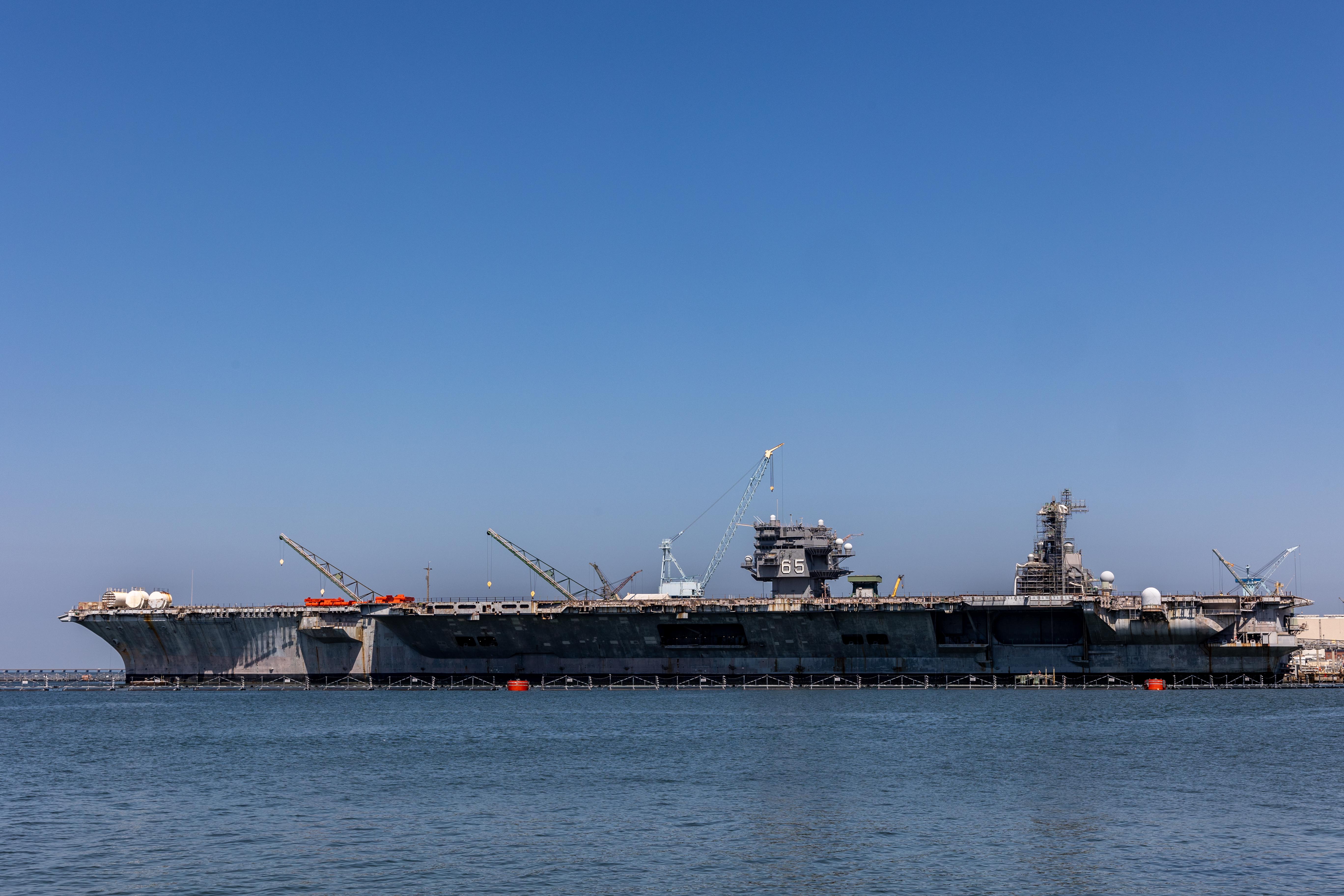 The study follows the long development period for the program that has drawn criticism in Congress. USS Gerald R. Ford (CVN-78), the world’s most expensive warship commissioned in 2017 and will now deploy later this year after reaching its initial operating capability in December. The ship was originally supposed to deploy in 2018 and the lag has exacerbated the Navy’s problems with carrier availability. Rep. Elaine Luria (D-Va.) called Ford a “$13 billion berthing barge” in 2019.

Still, the argument from the shipyard and the Navy are that block buys yield better deals on long-lead materials, keep the workforce stable and support vulnerable suppliers with more predictable workloads.

“You’re buying the smartest, cheapest way, two at a time, [on] four-year centers. It allows us to keep our workforce stable,” Fields told reporters on Friday ahead of the ceremonial keel-laying at the shipyard.
“It allows our industrial partners to keep their factories open and stable, keep hot production lines going and provide the best chance to meet schedules and budgets.”

While HII and the Navy have started making the case now, the service says it has a couple of years to make up its mind about how to buy the next carriers.

“A decision on CVN 82/83 two-ship buy is required no later than FY25 and will be evaluated during upcoming force structure and industrial base studies,” reads the Navy’s latest long-range shipbuilding plan.