Why GAO Did This Study 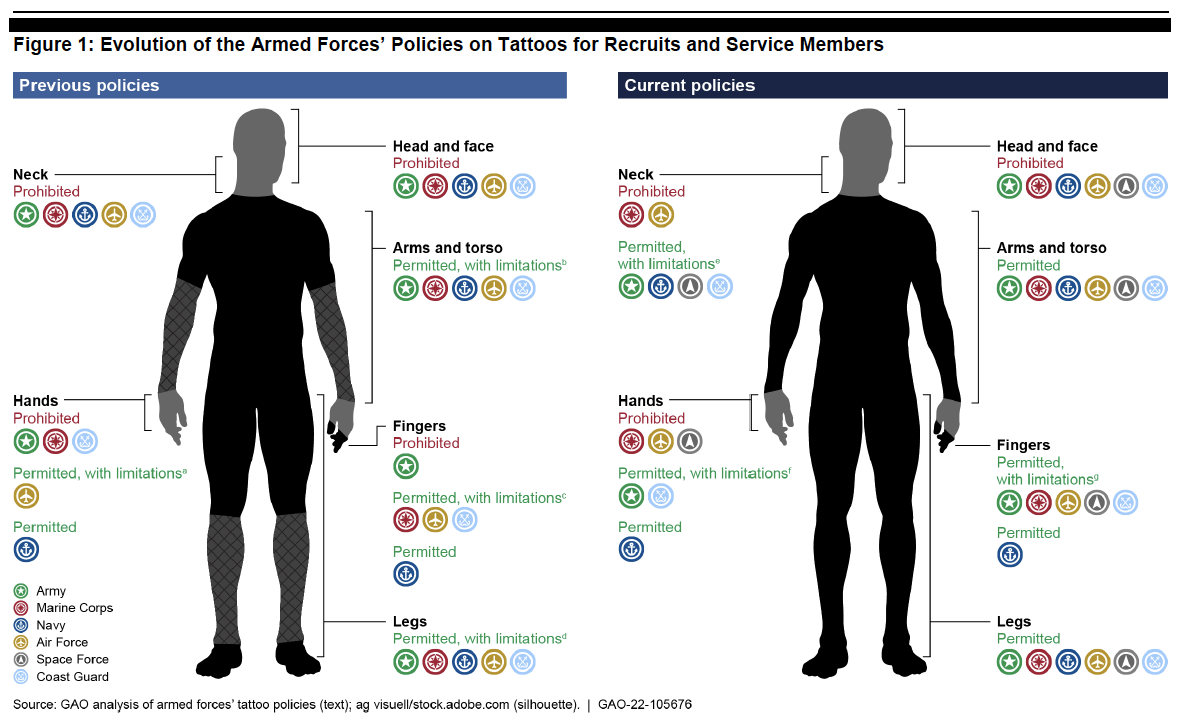 GAO recommends that each of the six armed forces updates its tattoo policy, as appropriate, to better ensure that it clearly documents whether waivers are available for recruits and service members; and provides clear guidance on eligible tattoos and requirements for requesting a waiver, among other things. DOD and the military services generally agreed, and DHS agreed, with the recommendations.

The armed forces’ policies for tattoo permissions and restrictions all focus on the content, size, and location of allowable tattoos. While the armed forces have content prohibitions for tattoos, the policies have evolved and become less restrictive regarding size and location. The current policies permit tattoos almost anywhere on the body except for on the head and face.

Armed forces officials GAO interviewed stated that recruiting and retention data do not include tattoo-specific data or other information that would allow an assessment of whether tattoo policies have a direct effect on recruitment and retention. Officials stated that tattoo policy updates are based on general discussions and on limited assessments of tattoo-related information, such as studies on tattoo prevalence among youth.

Most armed forces allow waivers (i.e., exceptions) for certain unauthorized tattoos, usually related to their size or location, for recruits and service members. Although each of the armed forces allows waivers for certain tattoo restrictions for recruits, the policies do not always mention or provide clear guidance on the requirements for these waivers. In addition, each armed force, except for the Navy, allows waivers for certain tattoo restrictions for service members, but their respective policies generally do not document this possibility clearly. Clear guidance on waivers for unauthorized tattoos would provide consistent information about requirements for waiver requests and conditions for approval. This could clarify whether tattoo prevalence affects future or continued military service.