People’s Liberation Army Navy (PLAN) and Russian Navy warships have made independent transits around Japan over the past few days, the Japanese Ministry of Defense said this week.

Japan spotted a Russian Navy corvette on Friday at 6 p.m. sailing east in an area 50 kilometers from Cape Soya, according to one of three new releases issued by the Joint Staff Office (JSO) of the Ministry of Defense Monday.

The image and pennant number provided in the release identified the corvette as RFS MPK-107 (332). The corvette then proceeded to transit La Pérouse Strait, which separates Hokkaido from Russia’s Sakhalin Island, and sailed into the Sea of Okhotsk. The Japanese MoD said Japan Maritime Self-Defense Force destroyer JS Shiranui (DD-120) monitored the Russian corvette.

A PLAN Luyang III-class destroyer was sighted transiting the Miyako Strait between Okinawa and Miyako Island, at 9 a.m. Saturday, before it sailed into the Pacific Ocean, according to the second JSO news release. The image and pennant number provided identifies the destroyer as CNS Nanjing (155).

A PLAN Jiangkai II-class frigate was sighted sailing south in the waters approximately 80 kilometers west of Uotsuri Island, part of the disputed Senkaku Islands held by Japan and claimed by both China and Taiwan, at 6 a.m. Sunday. The MoD’s provided image and pennant number identifies the ship as CNS Anyang (599). The PLAN frigate sailed south through the waters between Yonaguni Island, which is part of the Yaeyama Islands group, and Taiwan then into the Pacific Ocean. 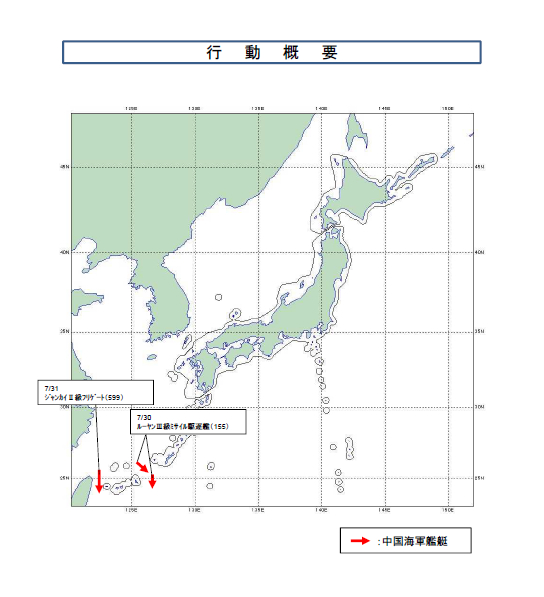 Meanwhile, at 11 a.m. Monday, a PLAN Shupang-class hydrographic survey ship carrying the pennant number 25 was sighted sailing northwest in the waters 80 kilometers south-southwest of Yonaguni Island, according to the third news release. The survey ship subsequently sailed north through the waters between Yonaguni Island and Taiwan and into the East China Sea.

Japan previously saw Shupang 25 on July 27 with Shupang 23 in the waters northwest of Yokodate Island, according to the MoD release. Both ships last week sailed through the Osumi Strait the next day. Tokiwa monitored the survey vessel’s Monday transit. 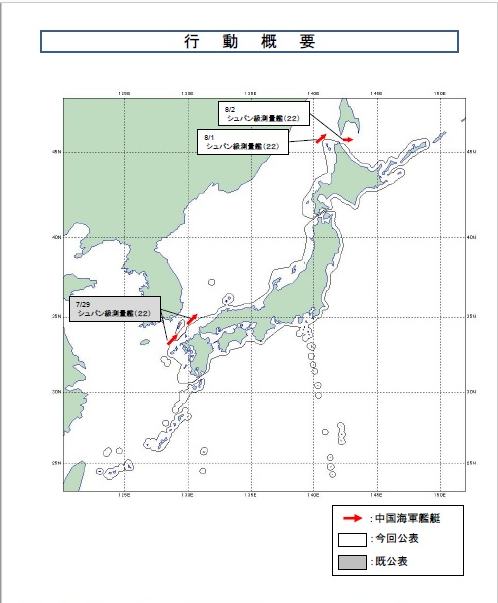 Although the passages of the Russian and Chinese ships are in accordance with international law, Japan is concerned with the activities of both countries’s ships in its vicinity. Japan’s recent 2022 defense white paper, released on July 22, detailed the threats posed to Japan by Russia, China and North Korea. Japan Defense Minister Nobou Kishi has said several times that Japan would continuously monitor the three countries’ military activities in its vicinity.

The movements came amid reports of House Speaker Rep. Nancy Pelosi (D-Calif.) making a visit to Taiwan this week. Pelosi touched down in Taiwan on Tuesday, making the Speaker the highest-ranking U.S. official to visit the island in 25 years.

China has voiced opposition to the potential visit, with a foreign ministry spokesperson saying Monday that Beijing is “fully prepared for any eventuality and that the People’s Liberation Army of China will never sit idly by, and we will make resolute response and take strong countermeasures to uphold China’s sovereignty and territorial integrity.”

In other developments, on Sunday, the JMSDF said destroyer JS Kirisame (DD-104), which is the second surface force of the JMSDF Indo-Pacific 2022 Deployment (IPD22), carried out replenishment training on Saturday with United States Navy dry cargo ship USNS Cesar Chavez (T-AKE-14) around Micronesia. Kirisame, from Friday to Sunday, carried out training with the operations center of the Federated States of Micronesia Border Control and Maritime Surveillance Department, according to a separate JMSDF Monday news release. Kirisame will make a port visit to Honiara Port, Solomon Islands, from Aug. 6 through Aug. 8,

IPD 22 is a more than four-month deployment throughout the Indo-Pacific region from June 13 until Oct. 28 and is comprised of two surface forces supported by a submarine and a P-1 Maritime Patrol Aircraft (MPA) at some of its engagements.

The first surface force, comprised of helicopter destroyer JS Izumo (DDH-183) and destroyer JS Takanami (DD-110), are currently in Hawaii for the Rim of the Pacific 2022 exercise.

30 JUL, #IPD22 second surface unit JS KIRISAME conducted a bilateral exercise with the @USNavy. JMSDF strengthen the capability of Japan-U.S. Alliance for effective deterrence and response, and contribute to the peace and stability of the Indo-Pacific region.
🇺🇸⚓️🇯🇵#FOIP pic.twitter.com/LFDpm9Jv8o