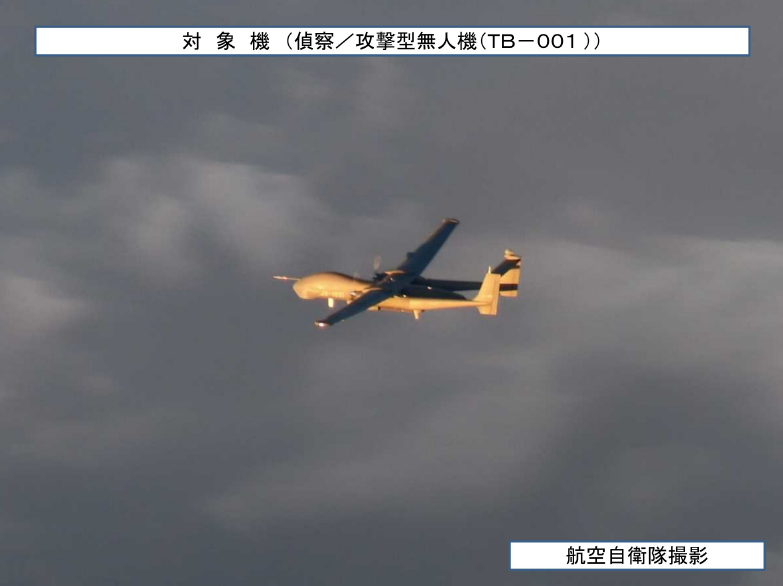 A Chinese unmanned air vehicle flew through the Miyako Strait of Japan before lingering off Taiwan’s west coast on Monday.

A Chinese TB-001 UAV flew in from the East China Sea, passed through the Miyako Strait and then went by the Sakishima islands as it turned toward Taiwan. It subsequently went south to the Bashi Channel, according to a Monday news release from the the Joint Staff Office (JSO) of Japan’s Defense Ministry.

The release stated that fighters of the Japan Air Self-Defense Force’s Southwestern Air Defense Force were scrambled in response to the UAV’s flight around Japan. The release did not elaborate on the further movements of the UAV, but it’s possible the UAV passed through the Bashi Channel and returned to China from there. The TB-001 has a range of around 3,000 miles and an endurance of 35 hours.

Taiwan on Monday began its nationwide Han Kuang exercise, which takes place over five days and simulates repelling an invasion of the island. On Tuesday over 20 of Tawain’s warships carried out firing exercises off the island’s northeast coast, simulating the repulse of a seaborne invasion.

The UAV’s flight is the latest Chinese platform to cause Japan concern. Japanese Defense Minister Nobuo Kishi highlighted the threats to Japan from China, as well as North Korea and Russia, in a Friday white paper. 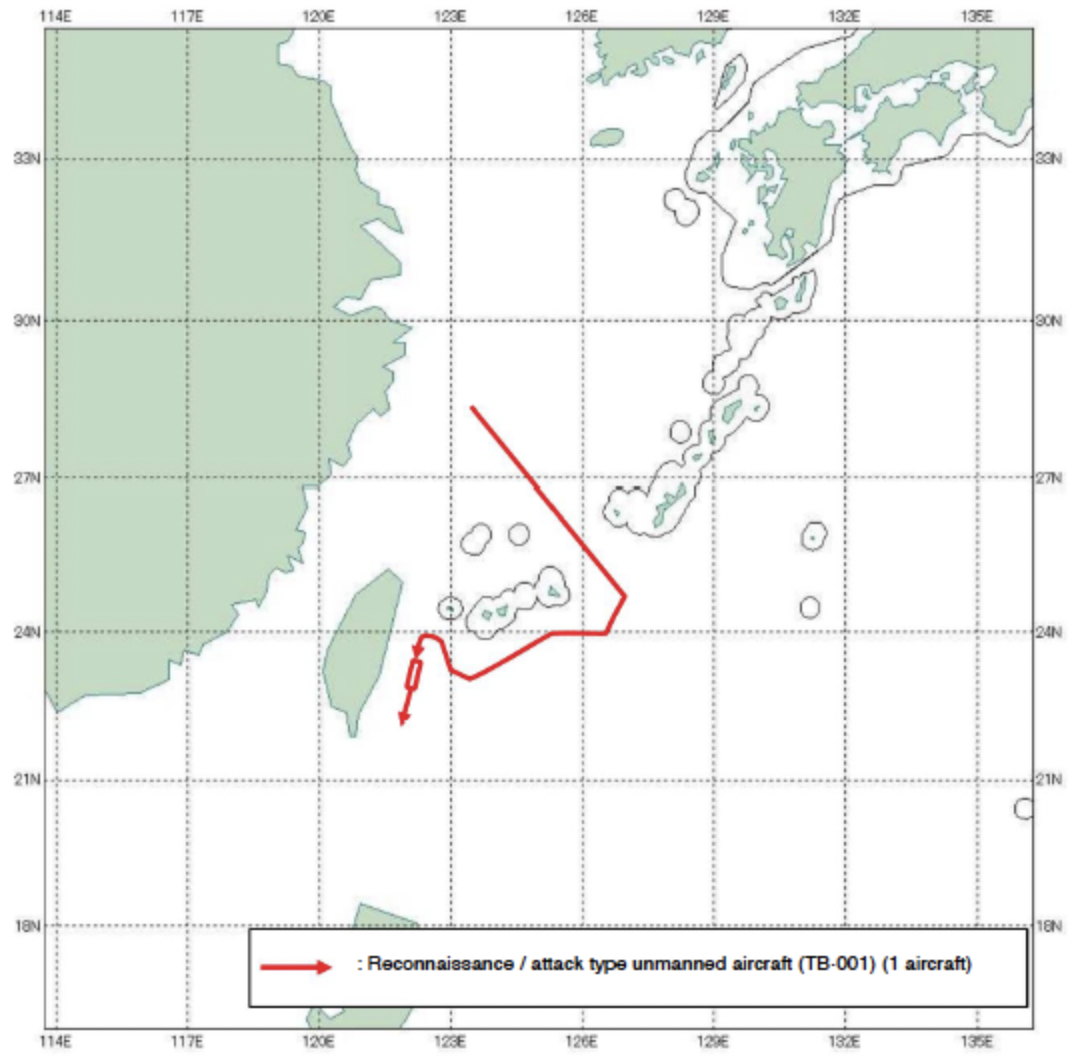 On Tuesday, a Chinese Ministry of Defense spokesperson criticized the defense white paper and said it made irresponsible remarks about China’s national defense, military development and normal military activities.

Wu added that China expressed strong dissatisfaction and firm opposition to the content in the white paper and lodged its representations to Japan on it.

Wu spoke in response to a media question during a press conference at the Ministry of National Defense, where he was asked to comment on the white paper. Wu said that the Taiwan issue is purely China’s internal affairs, and no foreign interference was allowed.

He added that the Diaoyu Islands – China’s name for the Senkaku Islands administered by Japan – and their affiliated islands are China’s inherent territory.

“China’s patrols in the waters off the Diaoyu Islands are legitimate and lawful, and the Japanese side has no right to make irresponsible remarks,” Wu said. “China has indisputable sovereignty over the islands in the South China Sea and their adjacent waters, and has always respected and safeguarded the freedom of navigation and overflight enjoyed by all countries in the South China Sea in accordance with international law. Japan is not a party to the South China Sea issue.”

Japan along with the United States, is sowing discord and stirring up trouble on the South China Sea issue, he added.

The Chinese military has the determination, capability and confidence to safeguard national sovereignty, security and territorial integrity, as well as national maritime rights and interests, and maintain regional peace and stability, Wu said.

“We urge the Japanese side to face up to and reflect on its history of aggression, stop using the pretense of being a victim to confuse international audiences, stop its erroneous words and deeds on relevant issues, and earnestly win the trust of its Asian neighbors and the international community with a responsible attitude and practical actions,” he said.

The Japan Maritime Self-Defense Force also issued several releases in regard to its activities with the U.S military.

The JMSDF issued a Monday news release stating that JS Kirisame (DD-104), which is the second surface force of the JMSDF Indo-Pacific 2022 Deployment (IPD22), carried out tactical training and replenishment exercises in the Pacific Ocean from Saturday to Sunday with U.S. Lttoral Combat Ship USS Jackson (LCS-6) and dry cargo ship USNS Carl Brashear (T-AKE-7). IPD 22 is a more than four-month deployment throughout the Indo-Pacific region from June 13 until Oct. 28 and is comprised of two surface forces supported by a submarine and a P-1 Maritime Patrol Aircraft (MPA) at some of its engagements.

The first surface force, comprised of helicopter destroyer JS Izumo (DDH-183) and destroyer JS Takanami (DD-110), are currently in Hawaii for the Rim of the Pacific 2022 exercise.

23-24 JUL, #IPD22 second surface unit JS KIRISAME conducted a bilateral exercise with the @USNavy.#JMSDF strengthen the capability of 🇯🇵🇺🇸 Alliance for deterrence and response, and we contribute to the defense of our country, the peace and stability of the Indo-Pacific region. pic.twitter.com/4076mtmTvE

25 JUL, JS YAMAGIRI conducted a bilateral exercise with @USArmy UH-60L in the Sagami Bay to strengthen the capability of Japan-US Alliance for effective and response.@USARJ_PAO #JapanUSalliance#JMSDF70th pic.twitter.com/1LyxjrlP6V

A second Tuesday news release stated that on Monday, the JMSDF conducted air defense and electronic warfare training with U.S. Navy EA-18G Growlers in the Pacific Ocean around Japan.

A third news release announced that from Aug. 4 to Sept. 11, JMSDF submarine JS Takashio (SS-597) will train with the U.S. Navy in the sea areas around Japan to Guam. This was the first U.S. dispatch submarine training for Japan’s 4th Reiwa calendar year, or 2022, and the 83rd dispatch since it began in 1963, according to the release.

“I’m thrilled to be able to visit Jakarta and conduct these submarine staff talks with our Indonesian partners in person once again,” Rear Adm. Rick Seif, the commander of Submarine Group 7, said in the release. “The U.S.-Indonesia partnership has never been stronger or more comprehensive than it is today.”

“Working together during these staff talks allows both of our submarine forces to learn from one another, helping us both contribute to our shared goal of maintaining regional stability in the Indo-Pacific region,” he added.

During the staff talks, personnel from both nations led discussions on safe submarine operations, according to the release. There were specific exchanges held on the U.S. Navy’s Submarine Safety Program (SUBSAFE), submarine maintenance, and submarine navigation.

The two days of events ended with Seif and First Adm. Indra Agus Wijaya, the commander of Submarine Operation, Indonesian Fleet, signing off on the goals and action items. Both leaders pledged to continue to work together on relationship building and interoperability between the two submarine forces. This was the first time the two navies had held submarine staff talks in person since 2018. Last year’s event was held virtually due to the COVID-19 pandemic.