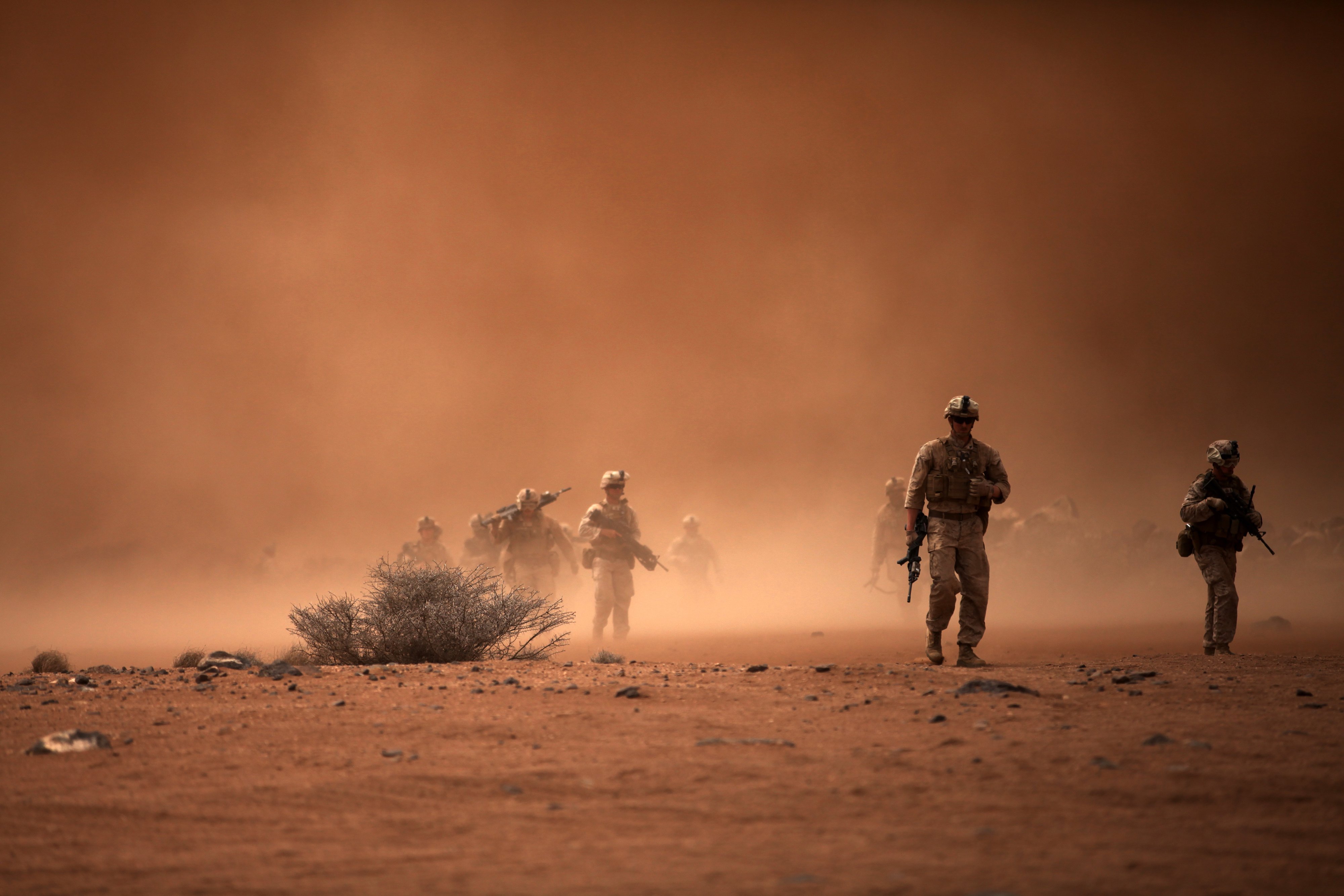 Compared to the acres of deck on an aircraft carrier, the flight deck of an Arleigh Burke-class guided-missile destroyer is only slightly larger than the circumference of a Sea Hawk’s rotor blades and margins are tight. When adding low visibility and a pitching deck, safely landing on a destroyer is among the hardest jobs for a helicopter crew. The conditions for the landing would make it a “suicide mission,” the pilots said.

But the pair calmly landed on the flight deck as easily as on solid ground, as the superstructure of the destroyer emerged just feet in front of the helicopter. Then, they left the simulator.

The difference for Hastings and Hahn was they were using Adaptive Shipboard Guidance and Recovery Display (ASGaRD) – one of two prototype landing aids for low-visibility landings under development at Naval Air Warfare Center Aircraft Division.

In the last decade, the Navy and Marine Corps have had 15 Class A helicopter accidents in low visibility, resulting in 36 deaths.

The new systems – ASGaRD and Low Speed Precision Control – would not only make landing a helicopter safer, but it might also allow pilots to make landings they could not previously do.

Landing a helicopter on a ship in such low visibility settings, as demonstrated by test pilots Hastings and Hahn, is a flight that pilots would not undertake currently because of the risk, they commented.

“I find that landing in low visibility environments to cruiser or destroyer at night are probably the hardest thing that [I] could ever do in an aircraft, and this system allow[s] me to do that easier, faster, and from my perspective, safer than I could ever hope for, with how I would do this in the fleet,” Hastings with the “Blackjacks” of Air Test and Evaluation Squadron (HX) 21 told USNI News.

ASGaRD is focused on landing helicopters on ships and uses cockpit displays to provide pilots with visual cues to assist with landing, although it does not interfere with the pilot’s flight, according to NAWCAD.

A helicopter has a more dynamic system than a fixed-wing aircraft, and landing one on a ship is completely different than landing a plane on a runway, he said.

“What I like about it is it really brings a lot of additional capability to shipboard landings, especially currently, there’s just not a whole lot of instruments, landing systems that are capable of getting a helicopter onto the deck of a smaller ship,” Hahn, ​​a rotary-wing aviator with Air Test and Evaluation Squadron (VX) 1, said.

Although ASGaRD is not yet ready to be installed in helicopters, ideally it would allow pilots to better land helicopters on ships, said aerospace engineer Jacques Hoffler. It can be used with any ship on which an MH-60 Romeo can land. 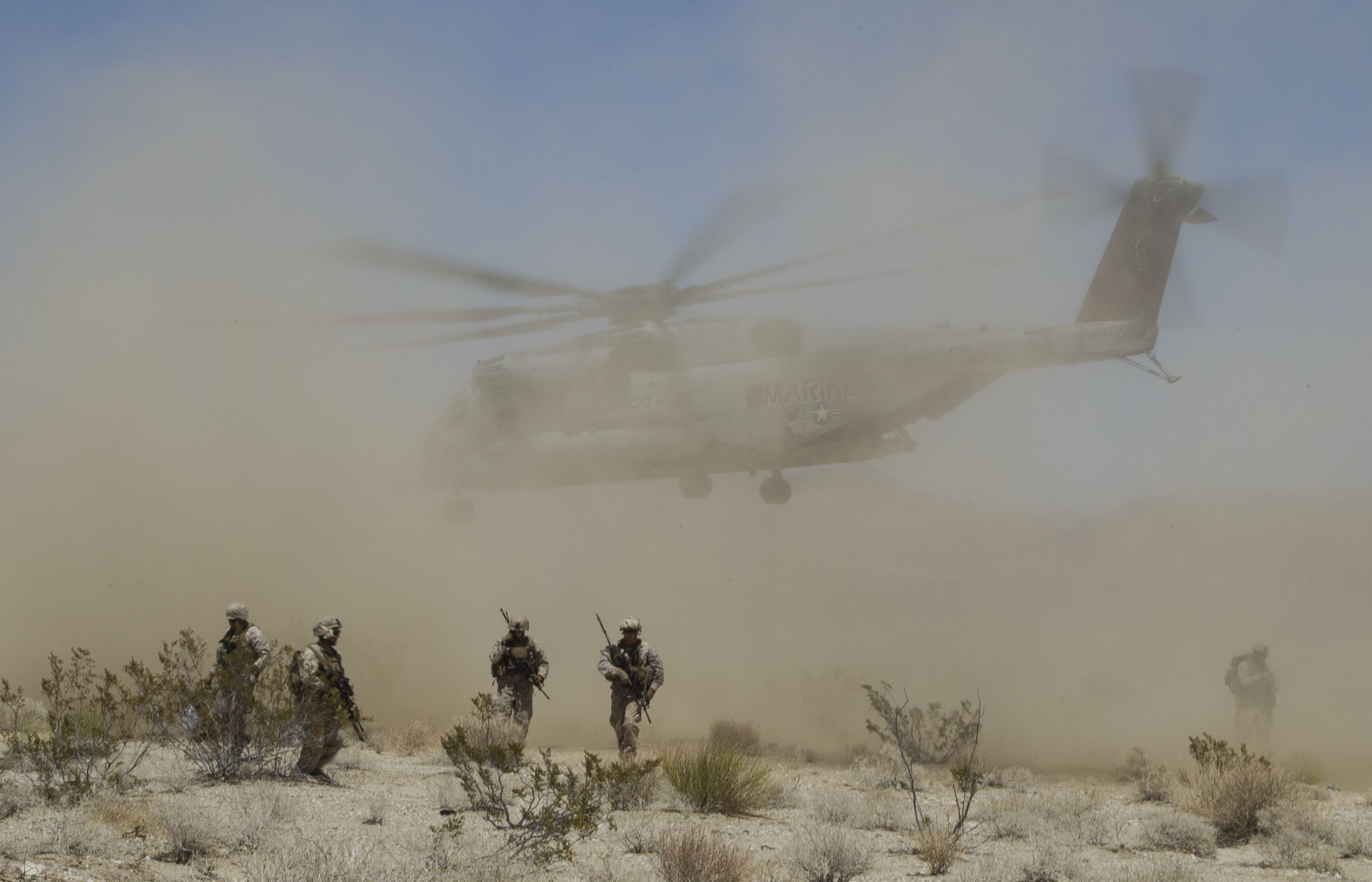 ASGaRD adjusts for two difficulties pilots encounter. One is ship motion, Hoffler said. The system can give pilots an indication as to when it’s safe to land based on the ship’s movement.

The other is low visibility or a degraded environment. A ship is hard to see about a mile-and-a-half out, so ASGaRD would again tell pilots when it is safe to land-based on distance, Hoffler said.

“It does not touch the flight controls or the aircraft flying characteristics in any way,” Hoffler said. “That is still completely left up to the pilot. What it does is provide guidance and cues to the pilot on how to control the aircraft, but the pilot is still 100 percent in control of the aircraft at all times.”

Without the ASGaRD system, it takes a crew of three people to make the helicopter landings at night, Hastings said. One person to fly, one to find the ship and focus on altitude, and one to direct speed.

With ASGaRD, the system provides a lot of the visual cues, requiring less conversation. It also helps give the pilot a better sense of the environment so they can better feel how they are flying.

“That’s going to help you with decelerating the aircraft from higher speed to getting yourself into hover over the ship, as well as coming down from altitude to right over that ship flight deck in a safe way that isn’t going to cause somebody to potentially get hung up or get any type of vertigo condition,” Hastings said.

Hastings compared it to driving at night where people tend to speed or drive slower than they would in the daytime because they cannot see as well in the dark.

The other system also in testing phase is Low-Speed Precision Control, which is meant to assist pilots in making land-based landings in hard-to-see environments, such as dust clouds. Unlike ASGaRD, Low-Speed Precision Control is a modular system that is bolted to the existing controls in the cockpit in order to give pilots flight control and stability modification while landing, according to the NAWCAD news release. 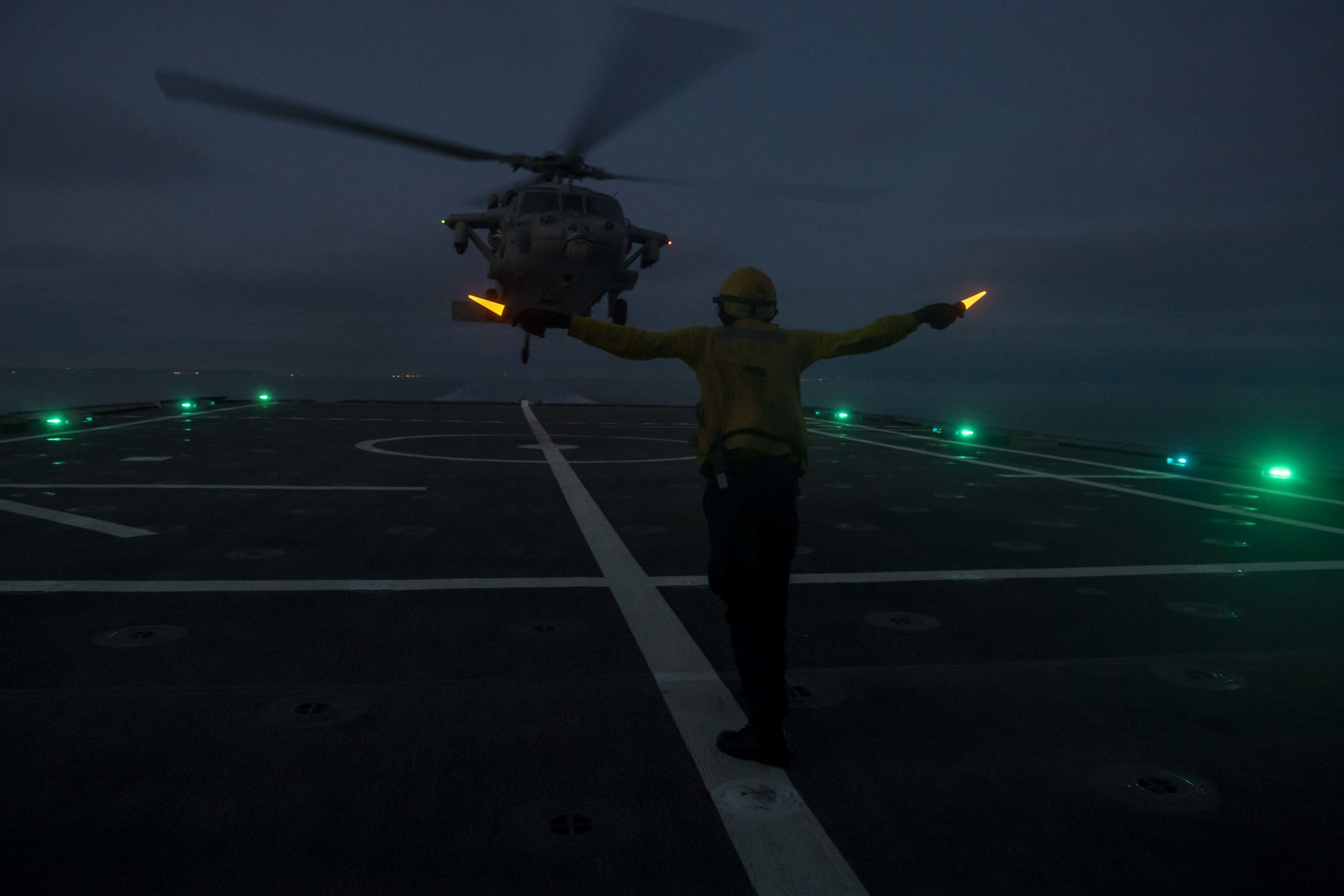 Helicopter pilots can fly into brownout situations where a dust cloud comes up, making it difficult for the pilot, said Matt Rhinehart, an air mechanic senior engineer.

“And so it either prevents them from doing their mission and in the worst cases, it can cause a mishap and cause a crash,” Rhinehart said. “And so what we really want to focus on is making them able to complete their mission and do it safely.”

Brownouts make flying difficult, Rhinehart said. They take out the horizon references pilots need to fly, and the swirling dust makes a person feel like they are moving, even when they are not.

Without LPSC, a legacy CH-53E Super Stallion needs a crew of five to land, especially in the case of a brownout, Rhinehart said. Everyone is talking to each other to make sure the landing is successful.

“That’s why it’s so dangerous,” Rhinehart said. “Because it’s just so difficult to do, but the Marines have to do it to do their mission.”

Of the 11 Class A Mishaps with low-visibility, eight of them involved brownout, according to the Naval Safety Command statistics.

Like with ASGaRD, LPSC will take the brunt of the responsibility, giving the pilots necessary cues so it does not require as many people to make a landing.

While ASGaRD focuses on helping a pilot with situational awareness, LPSC helps the pilot control the helicopter.

Rhinehart and other engineers at Naval Air Warfare Center Aircraft Division could see there was a problem with helicopters and low visibility, so LPSC is their solution to tackle it.

It was a problem already fixed in more modern rotary aircraft, but the majority of the fleet is older, Rhinehart said. So LPSC brings the modern approach to legacy aircraft. That means when it is installed in older helicopters, there will need to be more hardware installed than just a system upgrade. 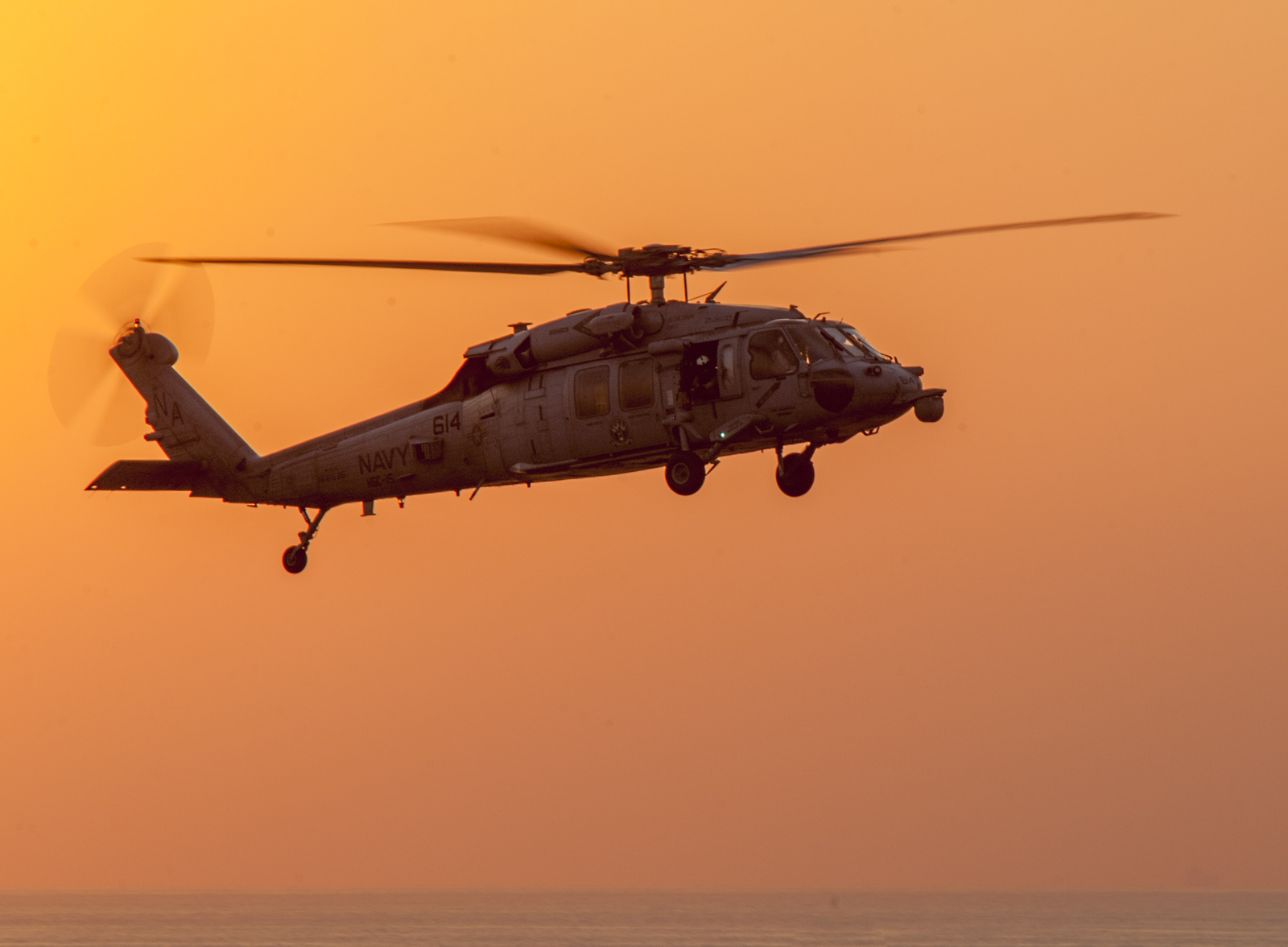 “So I’m excited just number one, because we know it’s a problem the fleet has, and that’s what we do around here,” Rhinehart said. “We solve their problems, we try to solve their problems, so that’s exciting. But from an engineering standpoint, I’m just excited because it’s a challenge. It’s really hard to get these old rotorcraft to do all this cool and modern stuff.”

Right now, the system is still in the preliminary design review phase, where the engineers are confident that it solves the problem, but they need to figure out the transition platform.

Pilots are currently testing the two systems. The systems need to work for the pilots, and the pilots out in the fleet need to know they can trust the systems, Rhinehart said. If they don’t, pilots won’t use it.

For now, ASGaRD and LPSC only exist in simulators at Patuxent River. Rhinehart predicts that it could be out to the fleet in three to four years.