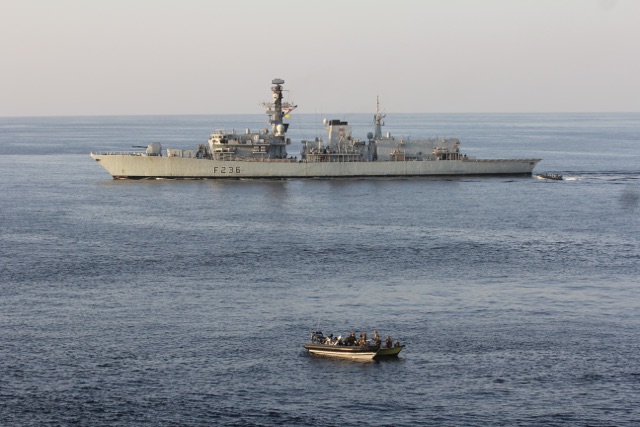 A U.S. destroyer assisted the U.K. Royal Navy to seize smuggled Iranian weapons in early 2022, the U.K. announced on Thursday.

HMS Montrose, with help from USS Gridley (DDG-101), seized weapons, including engines needed for land attack cruise missiles and surface-to-air missiles, from smuggler-operated speedboats, according to the U.K. release.

Specifically, the weapons were Iranian-produced 351 land attack cruise missiles and 358 surface-to-air missiles, according to the release.

Royal Marines found dozens of packages of weapons after securing and searching two Rigid Hulled Inflatable Boats. The weapons were brought back to Montrose.

The two seizures took place nearly a month apart. The first was on Jan. 28, the second Feb. 25. Gridley was involved in the second seizure, according to the UK release.

“These interdictions demonstrate the professionalism and commitment of the Royal Navy to promoting stability in this region,” Montrose Commanding Officer Claire Thompson said in the release. “I am extremely proud of my crew – the Royal Navy sailors, aircrew and Royal Marines involved in these endeavors and the significant positive impact they are having in maintaining the international rules-based order at sea.”

Montrose deployed a Wildcat helicopter to scan for boats carrying illicit goods. In February, an MH-60 Seahawk helicopter deployed from Gridley as well.

The UK seized the weapons in areas that have been used to traffic weapons to Yemen, according to a NAVCENT press release. The U.S. and UK often conduct patrols in order to prevent weapon trafficking,

“We have a decades-long strategic relationship with the Royal Navy,” said Vice Adm. Brad Cooper, commander of U.S. Naval Forces Central Command, U.S. 5th Fleet and Combined Maritime Forces, in the release. “Our continued collaboration on maritime interdictions in the Middle East reflects our extraordinary partnership and strong commitment to regional security and stability.”