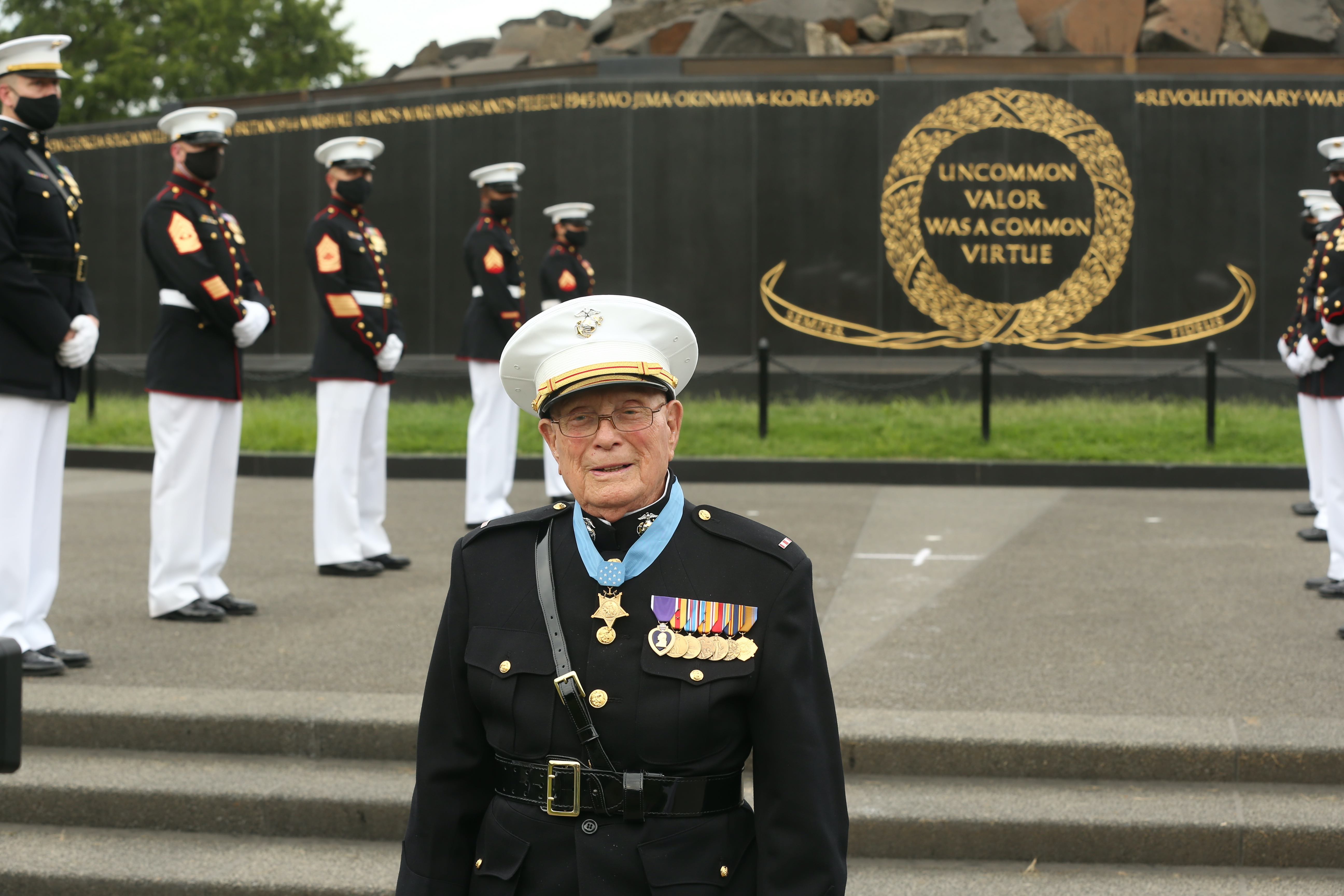 Hershel ‘Woody’ Williams, poses for a photo before the start of a Sunset Parade at the Marine Corps War Memorial, Arlington, a., Sept. 2 2020. US Marine Corps Photo

Speaker of the House Nancy Pelosi and Senate Majority Leader Chuck Schumer announced the body of Medal of Honor recipient Herschel Woodrow “Woody” Williams will lie in state in the Capitol Rotunda.

In making the announcement Sunday, Pelosi, (D-Calif.) and Schumer, (D-N.Y.) said the proceedings honoring Chief Warrant Officer 4 Williams will take place after consulting with his family and Congress returns from the July recess.

Williams, 98, was the last surviving World War II Medal of Honor recipient. The Marine Corps veteran was awarded the nation’s highest award for his actions on Iwo Jima. He died Wednesday, June 29, surrounded by family, at the VA Medical Center in Huntington, W.Va.

Details on the arrival and departure ceremonies at the Capitol will be announced at a later date.

“When Woody lies in honor under the Capitol Dome, it will be with immense gratitude for his service that the Congress will pay tribute to this legendary hero — and all of the patriots who fought for our nation in World War II,” Pelosi said in a statement accompanying the announcement. 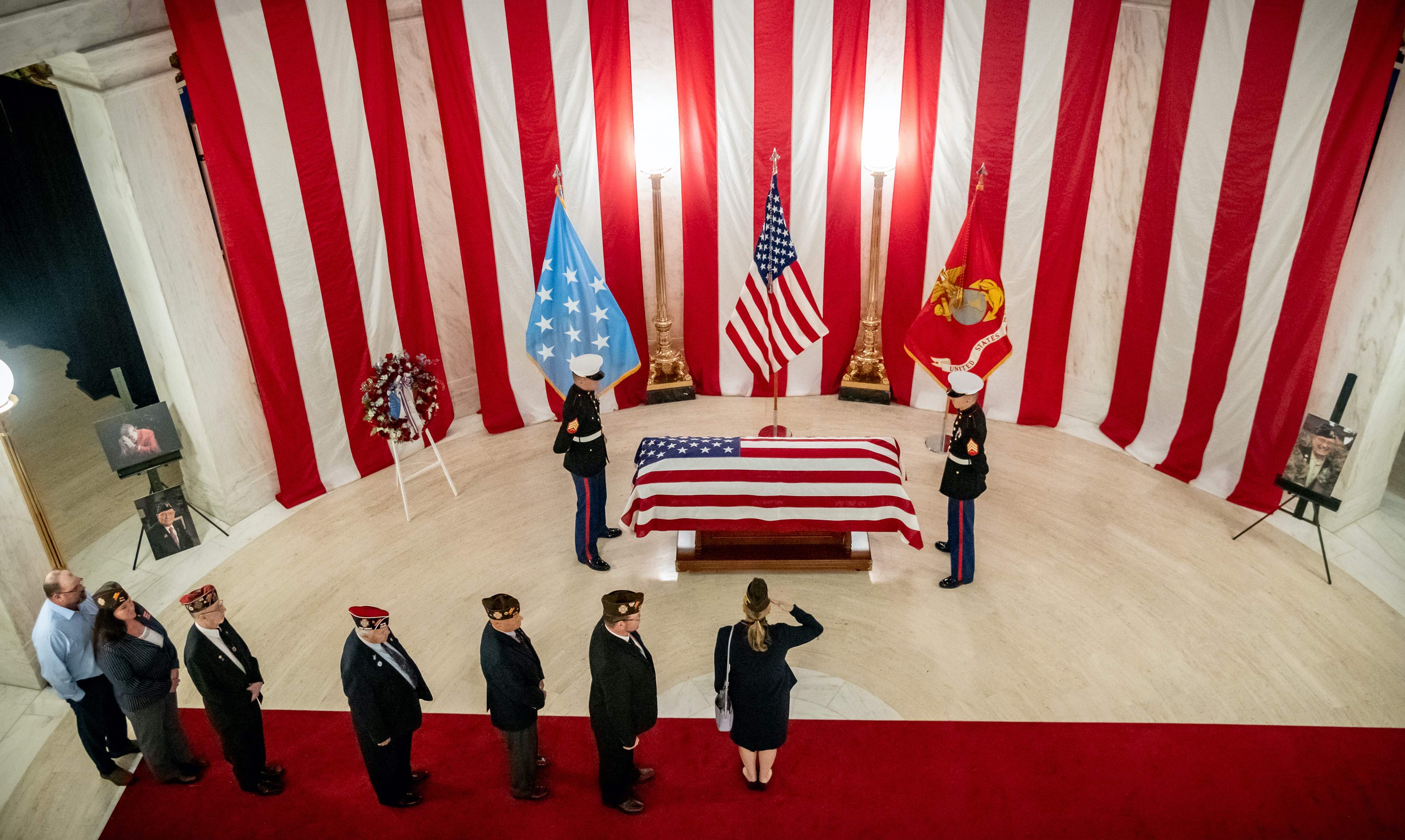 Schumer added, ‘“This is only a small tribute to someone who has made as impactful contributions to America as Woody and all our brave soldiers who fought against tyranny and defended our country in World War II. Whether it was for his acts of bravery in combat or his tireless advocacy for all veterans and their families, Woody made our entire country, especially his fellow West Virginians, proud.”

Following his service in the retaking of Guam, Williams was one of several demolition sergeants on Iwo Jima, USNI News previously reported. In the fighting that emerged there, he became the last one left. One of Williams’ responsibilities was to take out pillboxes that were protecting Japanese airfields.

“Bazookas and that sort of thing had no effect on them, because they were so thick and well built,” Williams said in a 2017 interview for the Department of Defense. “The only way to actually eliminate the enemy inside those pillboxes was by flamethrower.”

As the only demolition sergeant left at Iwo Jima, Williams went forward with four riflemen to protect him and took out seven pillboxes. That helped to neutralize the Japanese strongholds, according to Defense Department feature story on his service.

“That made a hole big enough that [the company] could go through and get behind any other pillboxes that were in that area,” Williams told the Department of Defense. “Once you got behind the pillboxes, then we had the advantage.”

President Harry Truman presented him with the Medal of Honor.

Williams, from Quiet Dell, W.Va., served for 20 years in the Marine Corps and the Marine Corps Reserve. Following his time in uniform, he was known for his advocacy of veterans’ issues and strong support for Gold Star families.