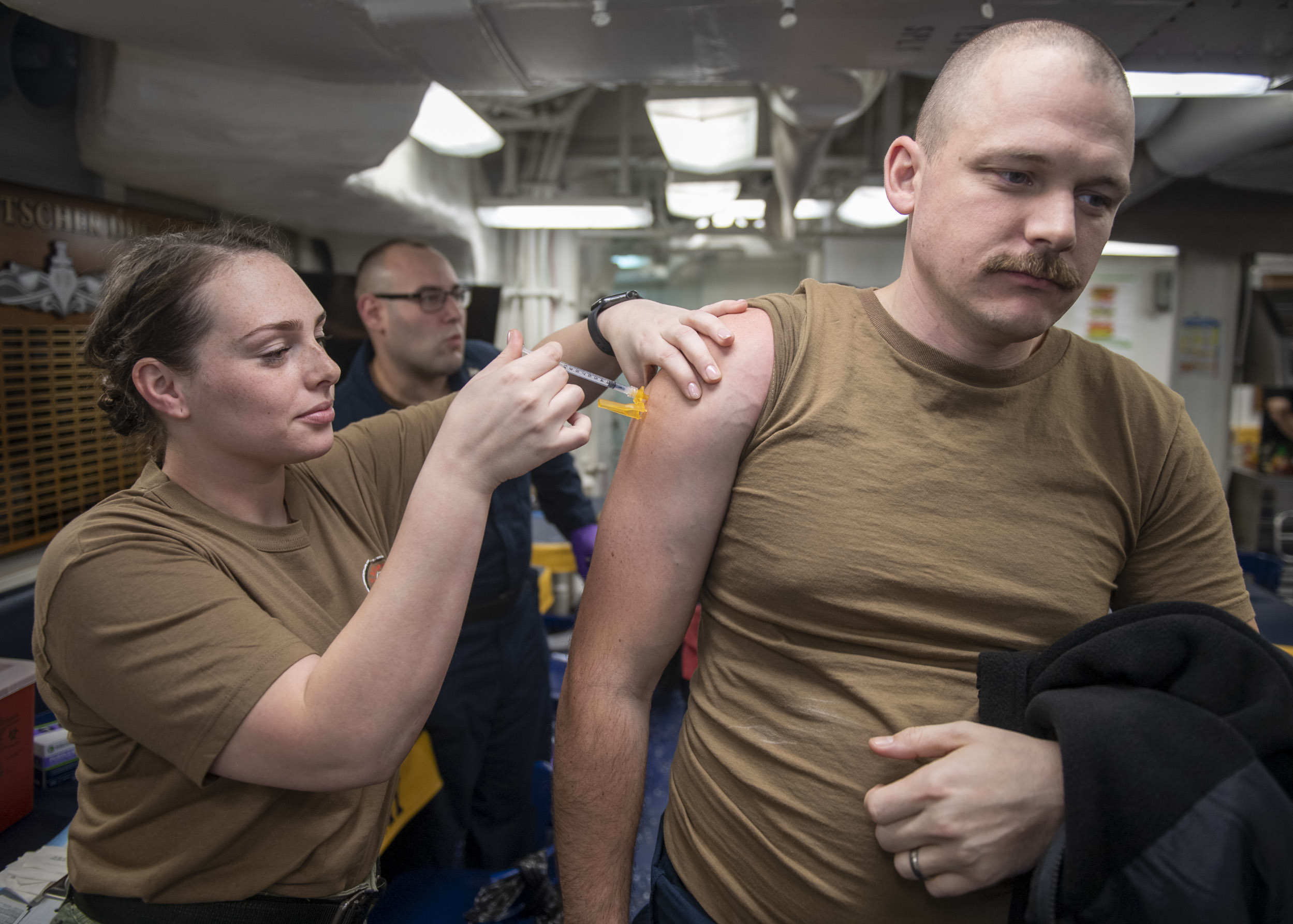 Navy separations due to COVID-19 vaccine refusal dropped over the past week, the result of the injunction preventing the sea service from separating those who applied for religious waivers.

The Navy reports approved separations each week in the service’s COVID-19 update. Due to a class-action lawsuit against the Navy and Department of Defense officials, the service cannot separate anyone who submitted a religious exemption request, which halted some of the approved separations, Lt. Travis Callaghan said in an email.

The April 20 COVID-19 report was the first to reflect the injunction, Callaghan said.

Any sailors who submitted a religious exemption for the COVID-19 vaccine can continue in the Navy under the injunction, according to NAVADMIN 102/22.

The NAVADMIN, referencing the injunction, prevents adverse action against sailors who will not get the COVID-19 vaccine and submitted a religious exemptions request.

Under the NAVADMIN, the sea service can still reassign those who are not vaccinated against the virus to non-operational positions.

What constitutes adverse action is a debate between the Navy and sailors currently suing officials over the vaccine mandate. A commanding officer who is currently assigned to shore duty so the Navy could send his ship underway considers his temporary reassignment “adverse action,” his attorney told USNI News, although the Navy does not include it.

Under the NAVADMIN, those who submitted a religious exemption request, including those currently appealing denials, are no longer considered as refusing the vaccine, according to the Navy policy.

Sailors who submitted a religious waiver and requested retirement or resignation in lieu of getting vaccinated can withdraw it under the NAVADMIN.

“Members who submitted requests for religious accommodation may cancel or amend previous voluntary retirement requests or requests to transfer to the Fleet Reserve. Time is of the essence for updated requests,” according to the NAVADMIN.

Sailors with religious exemption requests will also no longer receive adverse fitness reports. They also are no longer disqualified from educational benefits. However, bonuses are considered unearned for personnel who are removed from their assignments due to operational concerns.

“Detachment for cause for COVID-19 vaccine refusal is not authorized. Reassignment decisions, including decisions to relieve members of their assigned duties, remain an operational decision subject to the discretion of the cognizant commander. Previously executed detachments for cause will not be considered adverse at this time, will be removed from permanent records until otherwise directed, and shall not be commented on in subsequent fitness reports or evaluations,” according to the NAVADMIN.

Separations can continue for those who refuse vaccination and did not request a religious exemption.

Under the new NAVADMIN, sailors who were previously denied re-enlistment or an extension are now able to reenlist or extend. This does not apply to those who have already left the service, Hecht said.

“Separations that have already occurred constitute final agency action,” Hecht said in his email. “As litigation continues and ultimately resolves, the Navy will remain committed to implementing all court-ordered requirements and considering the full range of required actions in response to judicial decisions. We are working with the Department of Defense and Department of Justice to determine the scope and impact this injunction may have on those individuals.”

The Navy has now officially separated 798 sailors, down from 804 last week. The Navy has also started to separate officers.

Of the 741 active-duty sailors separated, 662 enlisted and four officers had fewer than six years of service, while 159 enlisted and one officer had more than six, Callaghan said in his email.

The ranks for active-duty sailors range from seamen recruit to chief petty officer for enlisted and ensign to lieutenant commander for officers.

Of the 35 reservists separated, 25 had fewer than six years of service, while 14 had more than six.

The Navy also separated 22 sailors who were in their first 180 days of service.

The sea service had approved 27 conditional religious exemptions for sailors who were in the process of retiring or separating from the Navy. Those have been put on hold as a result of the class-action lawsuit.

The Navy has also approved 10 conditional religious waivers for members of the Individual Ready Reserve.