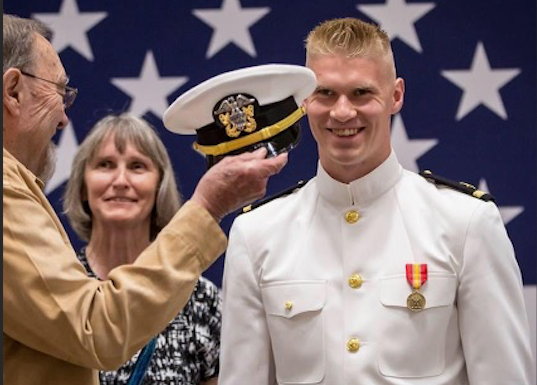 The Navy has identified the sailor killed in a Wednesday crash of an E-2D Advanced Hawkeye on Chincoteague Island, Va., just south of the Maryland border, the service announced on Friday.

Lt. Hyrum Hanlon, assigned to the “Greyhawks” of Airborne Command and Control Squadron (VAW) 120, was one of three sailors aboard the Advanced Hawkeye when it went down after operating near the Navy and NASA base at Wallops Island, Va., at 7:30 P.M.

“Two crew members were found injured on the top of the partially submerged wreckage. They were rescued and transported to the Wallops Flight Facility airport. Both were then transported to Tidal Health Hospital in Salisbury with non life threatening injuries,” reported Shore Daily News.

Hanlon commissioned in 2017 from the ROTC program at Arizona State University, according to his releasable bio provided to USNI News. He joined VAW-120 in June after serving in training commands in Florida and Texas.

“It takes a courageous and patriotic person to devote their life to the selflessness of serving in the armed forces,” said VAW-120 commander Cmdr. Martin Fentress.
“Hyrum embodied those characteristics and will be truly missed by his family and the Hawkeye community.”

The aircraft was partially submerged near Wildcat Marsh on the north part of Chincoteague and the Navy and local authorities are in the process of salvaging the aircraft.

“The U.S. Navy continues to coordinate with state and local officials on the salvage planning efforts of the E-2D aircraft. The health and safety of the local community is a top priority during recovery efforts; overflight aircraft confirmed no pollution or discharge of fuel in the area. Salvage operations are expected to proceed in accordance with standard procedure,” reads a Friday statement from Naval Air Force Atlantic.

The cause of the mishap is under investigation.