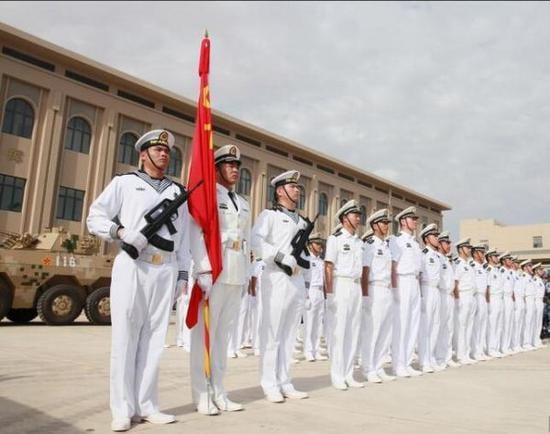 Chinese sailors at the People’s Liberation Army Navy base in Djibouti in 2019. Xinhua Photo

This post has been updated to correct where Russian mercenaries have been operating in Africa.

China’s ambitions in Africa are long-term and range from power plants and port investment to new military bases, but Russia, through its use of mercenaries like the Wagner Group, is propping up autocratic regimes and strives for immediate influence across the continent from Libya to Central Africa, the Pentagon’s top commander for the continent said Tuesday.

Army Gen. Stephen Townsend testified, “It was troubling to me that half of the continent” did not vote to condemn the Kremlin for its invasion of Ukraine in a March 2 U.N. vote. Many African nations abstained from the vote, which Townsend described as “biding their time.” One-hundred and forty-one nations condemned the Kremlin attack.

Townsend called Russian mercenaries “a malign influence” on Africa’s politics. “They’re buttressing dictators,” he said. High-level access gives the Kremlin leverage to sway national economies. In addition, he said, Russian oligarchs are using the continent to establish internet “troll farms” to influence policies and elections in Africa and other nations, including the United States.

The Wagner Group and other Russian mercenaries “are present in Libya in numbers,” a nation engaged in a nasty civil war. Townsend said they are especially noticeable in the Central African Republic. In a Brookings Institution report on Russian activities in Africa, Wagner “has been widely accused of perpetrating severe human rights violations and harassing peacekeepers, journalists, aid workers, and minorities. Wagner’s presence puts the CAR government at odds with the United Nations and the Western governments, which increasingly demand that the CAR ends its dealing with the Russian company or risk losing their assistance.”

The mercenaries also are exerting a great influence in Mali, now governed by a military junta, collaborating with security forces in controlling the countryside.

France cited the military takeover of Mali’s government and the growing influence of the Wagner Group for pulling out of the counterterrorism fight there and possibly reducing its presence in neighboring Burkina Faso and Niger, all former French colonies. The United States was providing logistical and intelligence support to the French in its Sahel counterterrorism efforts there.

“I believe the people in Mali are going to regret inviting Wagner in,” Townsend said.

U.N. investigators have linked the mercenaries to atrocities from rape to murder.

On the eastern side of the continent, ever since the United States pulled its forces from Somalia in late 2020, al Shabab – a terrorist organization that has carried out attacks on American embassies in Africa – has gathered strength. Though Townsend declined to elaborate in an open session, he told the Senate Armed Services Committee that he had made his views known inside the Pentagon as to whether the U.S. needed to re-establish a presence in Somalia to monitor the group..

“Deadly terrorism has metastasized” on the continent, he added, including al Shabab. The pullout back to Djibouti and Kenya “caused new challenges” in intelligence gathering and raised “risk to our troops.”

Townsend said he was not seeking new larger bases on the continent like the American one in Djibouti, but a presence in places like Somalia. “Our presence is not dependent on permanent bases,” he added.

“A few troops and a few bucks can go a long way” in Africa, he added.

China, on the other hand, “is working hard to develop more bases there.” Townsend said Beijing is using its Belt and Road infrastructure initiative and interests in minerals vital to high technology manufacturing and energy exploitation as entry points with African governments. They use those to build to military sales and later expand to possible basing.

The United States “is still the partner of choice” for development and military equipment sales, but he and Marine Corps Gen. Kenneth McKenzie, head of Central Command, told the panel that existing American laws and regulations can be cumbersome in the minds of potential buyers.

The commanders agreed that in those cases, governments turn to the Chinese or Russians, whose military use agreements are less restrictive, but often experience buyers’ remorse over long-term costs and equipment quality.

Townsend said, “our competitors clearly see Africa’s potential” for providing an advantage He added, the continent is “engaged in a struggle between democracy and autocracy.”