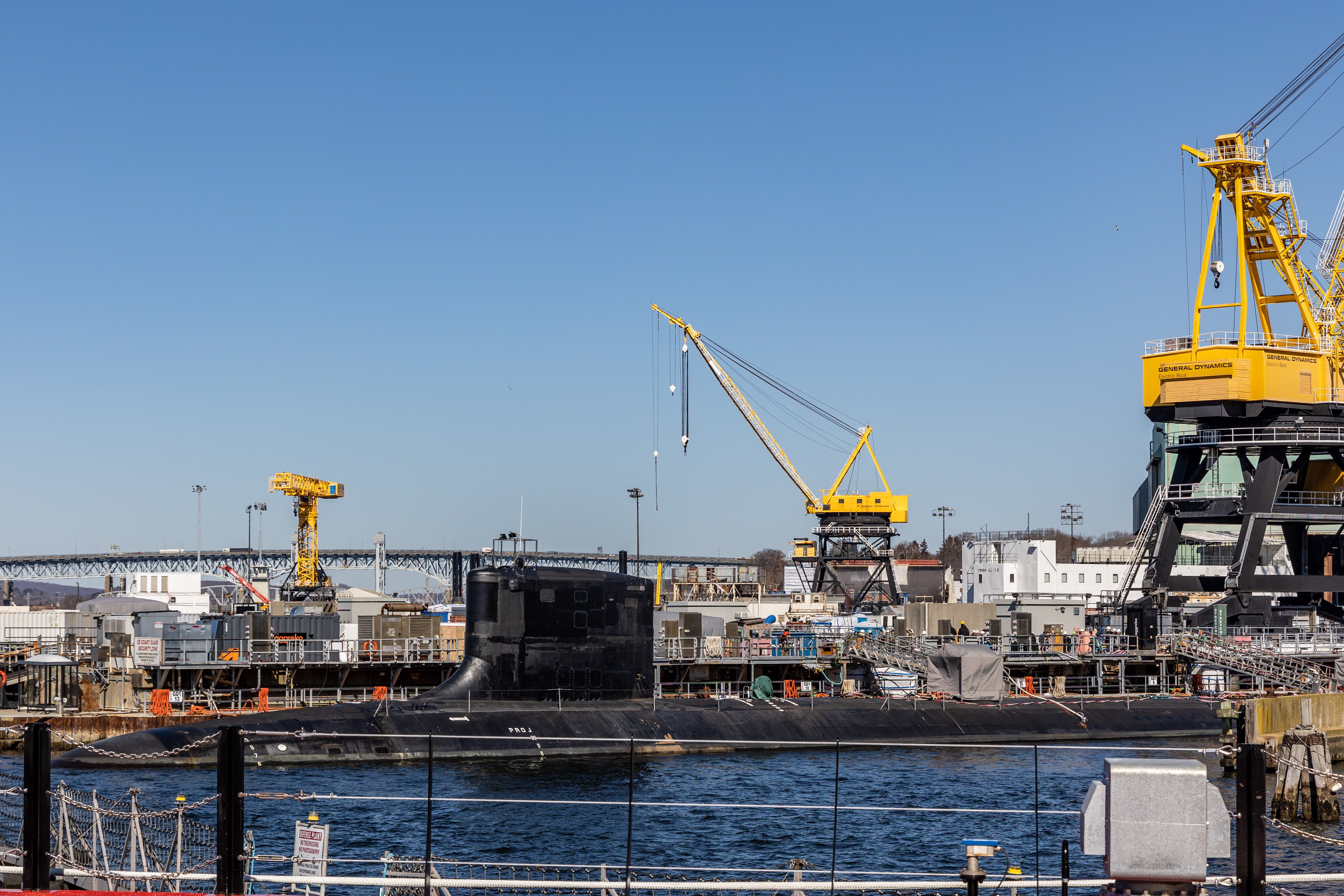 NORTH KINGSTOWN, R.I. – The backbone of the Navy’s next nuclear ballistic missile submarine is starting to take shape in a series of understated white buildings on the edge of Narragansett Bay.

Building-sized sections of the future USS Columbia (SSBN-826) have been under construction at the General Dynamics Electric Boat facility at Quonset Point, under cover from the Rhode Island winter and largely unseen due to the COVID-19 pandemic.

EB’s sub construction yard – split between its more than 100-year-old yard in Groton, Conn., and the newer facilities on the site of an old U.S. Navy air station that’s turned into an industrial park – is finalizing an almost $2 billion expansion of its yards to build the dozen boat Columbia-class to replace the aging class of Ohio SSBNs, as well as building the larger Virginia Payload Modules for the Block V Virginia-class attack submarines.

Last week, USNI News toured the Quonset Point facility and EB’s yard in Groton, where the first pieces of Columbia have been under construction since 2020.

While carrying eight fewer nuclear missiles than its predecessor, Columbia will be longer, heavier and feature a complex electric drive propulsion system and associated technology to keep the class relevant for the 50-year lifespan of the boomer.

“Columbia is a 20,000-ton submarine. It’s the largest, most complex submarine that’s ever been built,” Chief of Naval Operations Adm. Mike Gilday told USNI News in an interview en route to the construction facility.

The $110 billion Columbia program and the VPM addition are refining techniques EB developed for the construction of the early Virginia-class submarines to maximize the efficiency of assembling the complex hulls under the pressure of a timeline with razor-thin margins.

The schedules of the Navy’s fleet of 12 Ohio-class boomers are meticulously planned out years in advance to ensure there’s always a set number of SSBNs underway to serve as a strategic nuclear deterrent. Columbia is set to enter the rotation in 2031.

“You’ve heard us say a million times that there’s no margin with Columbia. It’s really no joke,” Gilday said. “We really have to get that boat out on time.”

EB is at once increasing its yard and workforce size to tackle Columbia and the more complex Block V Virginia-class attack submarine program while digging out of a backlog of work from the Block IV program that was exacerbated by the COVID-19 pandemic.There was a two-year gap between delivery of USS Vermont (SSN-792) on April 17, 2020 to the future USS Oregon (SSN-793), which delivered on Feb. 26.

Yard leaders told USNI News they are optimistic they can both dig out of the backlog on Block IV and ramp-up to build the Columbia subs and more complex Block V VPM sections.

“We’re going to continue to be challenged from a schedule and performance perspective, especially coming off COVID. I think that will be a challenge for the foreseeable future,” EB president Kevin Graney told USNI News last week. “But I think we’ve got a good plan and I’m pleased with the way the workforce proficiency is developing.” 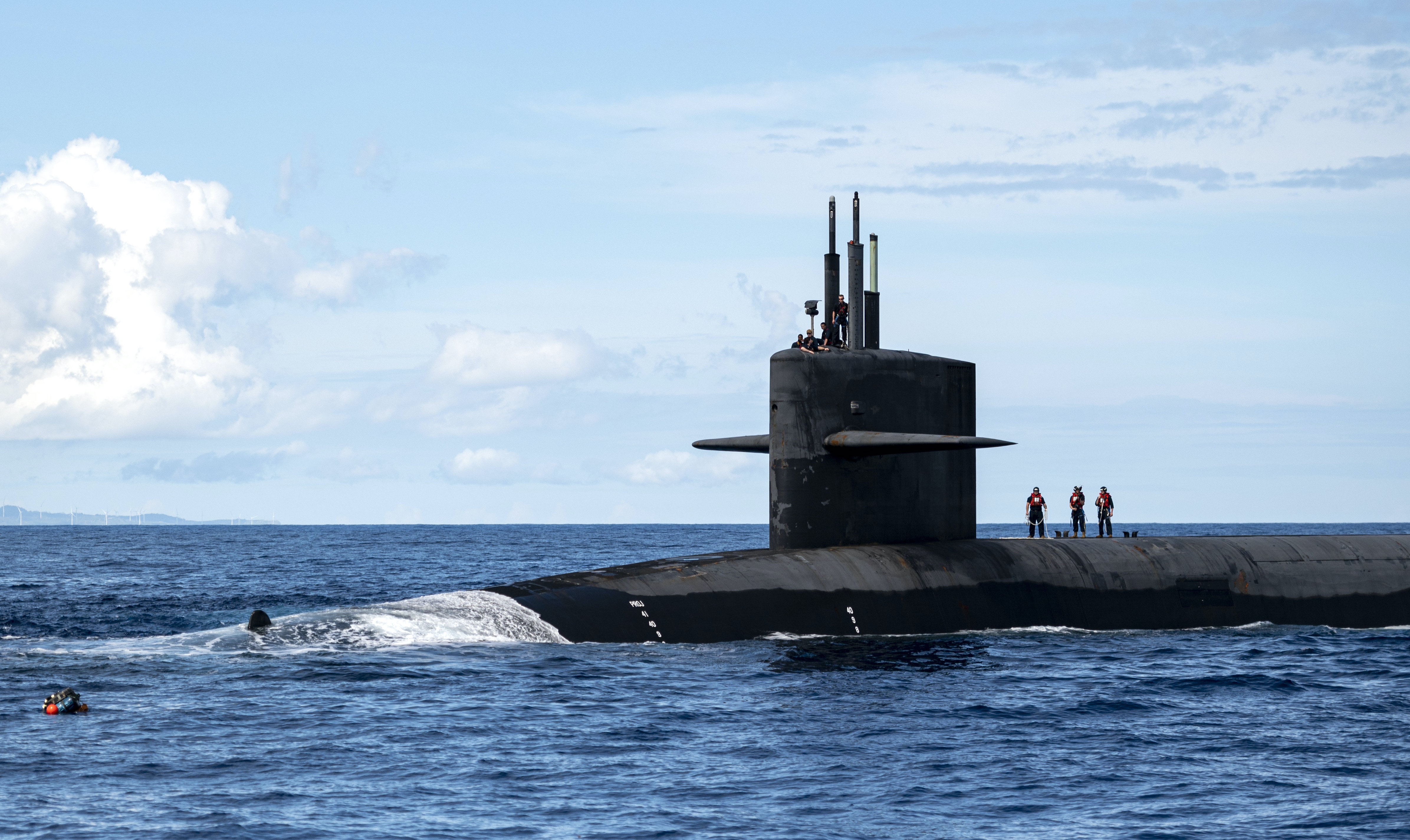 USS Henry M. Jackson (SSBN-730) moves into position to retrieve an air-dropped payload from an Air Force C-17 Globemaster III in the vicinity of the Hawaiian Islands. US Navy Photo

Keeping to the schedule is key for the Navy as the first Ohio-class boomer –USS Henry M. Jackson (SSBN-730) – is set to leave the service in 2027. Columbia needs to deliver by the end of 2027 then enter years of planned first-in-class testing to be ready for its first patrol.

“We’re shooting for a point to the left of 84 months for delivery because we know there’s no margin,” Gilday told USNI News during the trip.
“Ohio-class hits their service life in 2027. Right now, we want to be able to deliver the first Columbia hull in the fall of 2027.”

“We have to solve that problem,” he said. “If there are unacceptable delays, it’s gonna really hurt the program with Congress.

From the Navy’s perspective, the stealth and the technical advantage U.S. attack boats and boomers have over Chinese and Russian competitors, the Navy has pushed money to keep the submarine programs moving uninterupted. That includes asking Congress for special permission to continue work on the Columbia program under ongoing Continuing Resolution.

“We have to hit that cadence, on our end, and I would say, with the great help of Congress, we’ve been able to keep funding in place including that anomaly in the legislation with the latest continuing resolution that allowed investment, advanced procurement funding to continue to flow for Columbia. It’s been really important,” Gilday said. 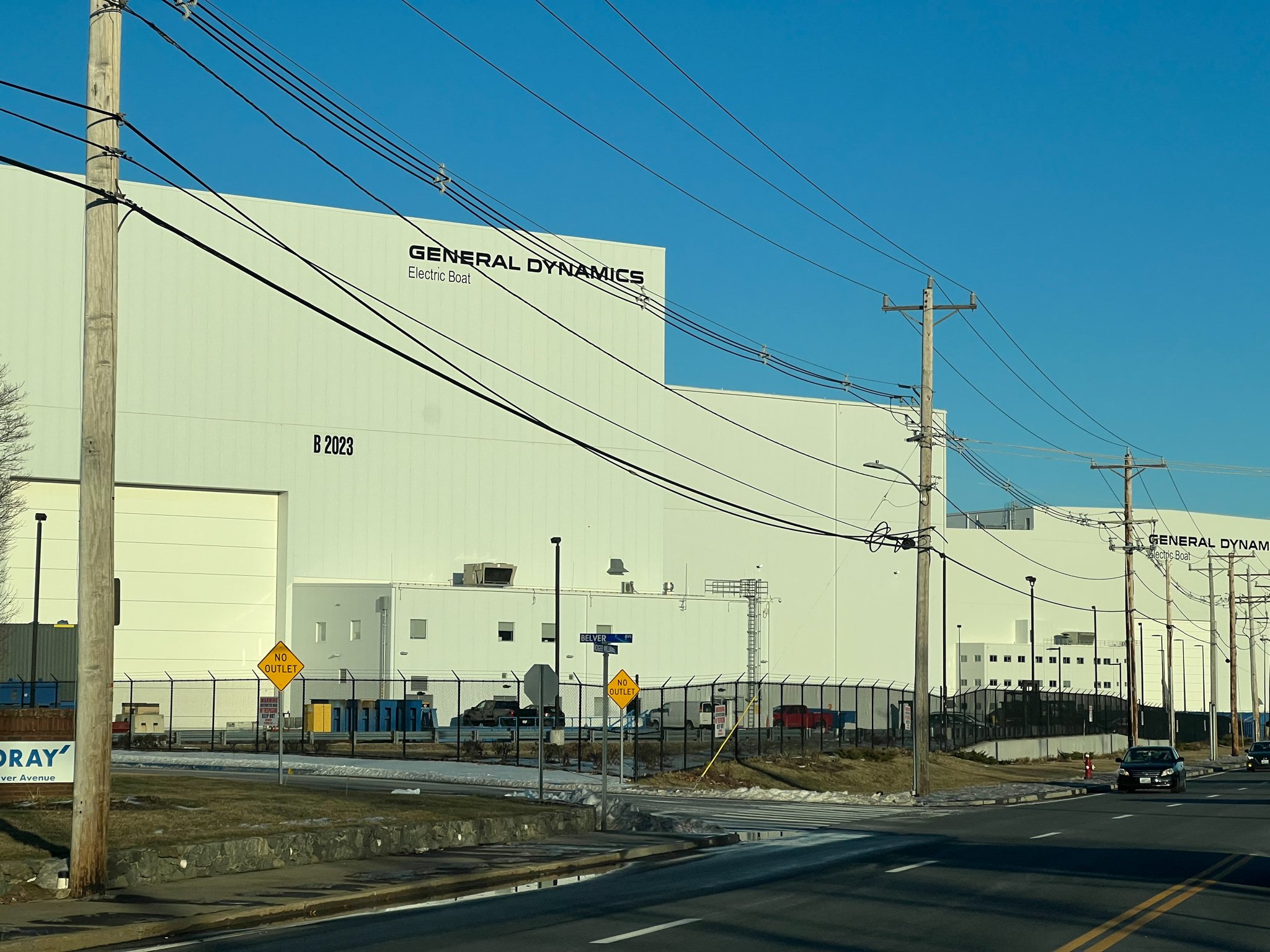 The Columbia-class boomers start construction at EB’s facility in Rhode Island. EB started to use the 125-acre facility, built on former Naval Air Station Quonset Point, in the 1970s and also constructed hull cylinders for the Virginia-class program there starting in the late 1990s.

For more than 20 years, EB and Huntington Ingalls Industries Newport News Shipbuilding have teamed to build the Navy’s Virginia-class nuclear attack boats – each company building certain sections of the submarines in their respective yards. EB constructs the mid-section of the boats while HII has specialized in bending the steel for the bows and sterns for the Virginias.

For Columbia, all the submarines will be assembled in Groton and work on the first boomer is well underway. Now, after two years of construction, the earliest sections of what will be the 20,000-ton, coal-black Columbia look like a series of four-story-tall used coffee cans.

Instead of laying the slices of pressure hull on their side to begin outfitting the submarine, the sections of the hulls are set vertically to the floor, resting on chunky steel frames painted royal blue. The orientation of the hull section inside the massive fabrication bay makes it easier to weld, paint and install systems, Kurt Hesch, senior vice president of programs at EB, told USNI News.

Many of the decisions around how to orient the massive steel cylinders are made to make working on the sections as easy as possible.

In the interior of one section of Columbia’s pressure hull with the orange patina of unpainted steel, EB had assembled scaffolding into several separate floors accessible by a central staircase to allow easy access to welders and painters. Each floor had easy access to both power drops and compressor hook-ups for air tools. 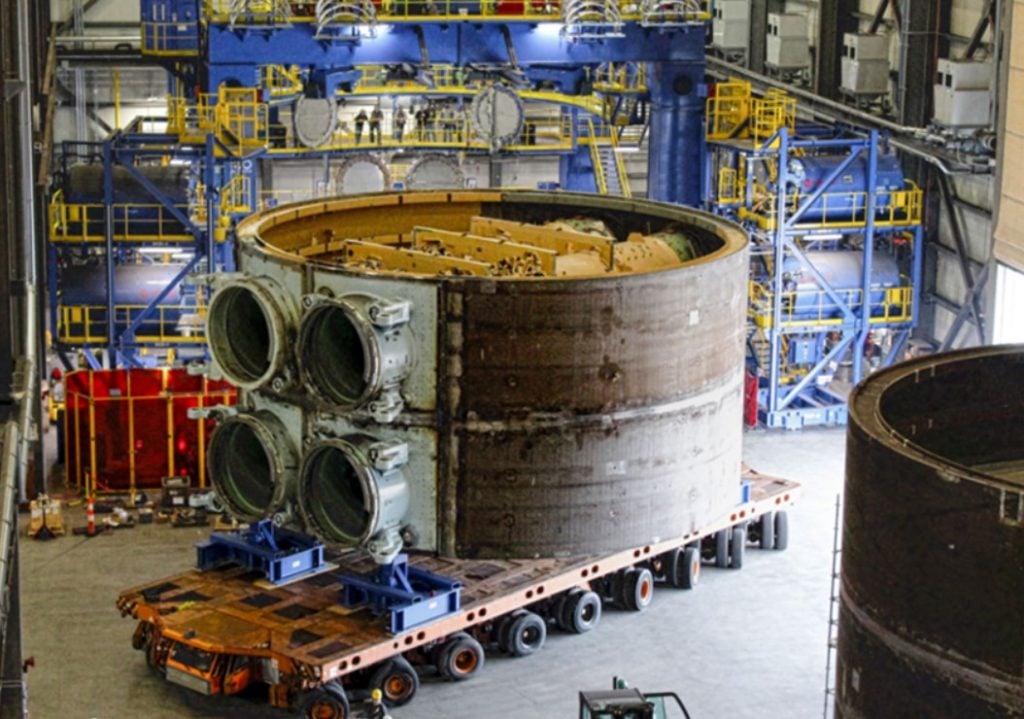 In the next bay, workers were assembling the massive tubes that will hold Columbia’s intercontinental ballistic missiles. After precision work to outfit the tubes, EB workers group the tubes in a “quad pack” to assemble the Common Missile Compartment section, which will be used aboard the Columbia submarines and the United Kingdom Royal Navy’s Dreadnought-class SSBN. The program suffered delays in the CMC fabrications due to bad welds in tubes made by subcontractor BWX Technologies and was a major setback to manufacture.

Four CMCs will join together to create the 16-tube capacity for the Columbia SSBNs brought together by robotic welding machines.

Nearby, the first VPMs are being assembled. The 84-foot inserts for the first two VPM submarines – Arizona (SSN-803) Barb (SSN-804) – are taking shape. The sections will hold four tubes that will contain multiple all-up canisters, each of which will hold seven Tomahawk Land Attack Missiles. Some configurations later in the line will be capable of fielding three of the Pentagon’s hypersonic strike weapons.

When construction and outfitting of the cylinders for the VPM and Columbia are completed, a custom-built barge Holland will move the sections from Narraganset Bay 60 miles down the east coast to EB’s Columbia final assembly building in Groton. 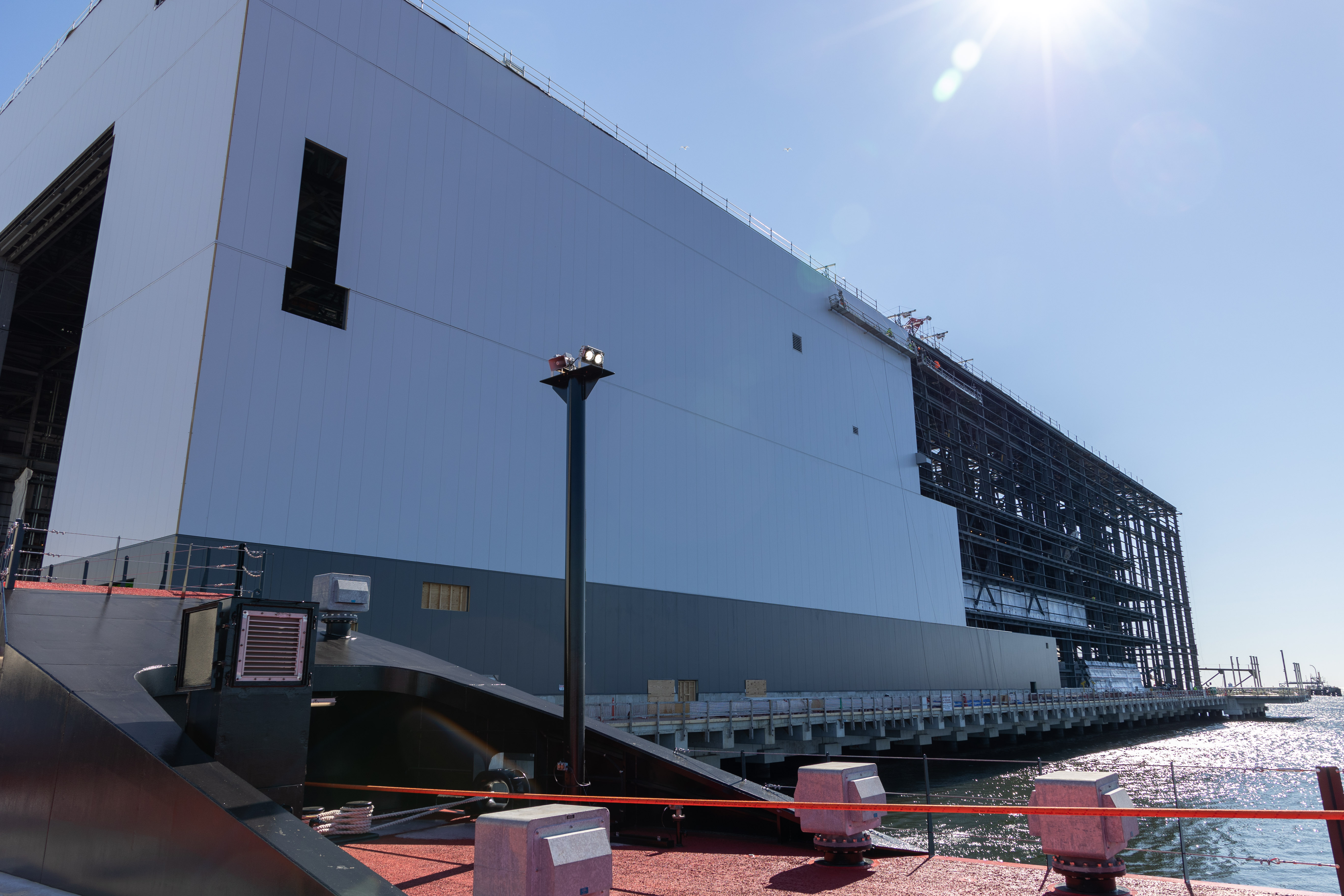 While work at Quonset Point is humming along, the increase in activity from the Columbia program has yet to fully hit Electric Boat’s yard in Groton.

EB broke ground on Building 600 in 2019 and is more than halfway completed. The 200,000 square-foot building will shelter about 1,400 workers who will stitch together the six super-module sections of Columbia and the follow-on SSBNs.

But before the Columbia program Groton kicks off in earnest, EB is grappling with how to keep workers busy until the work hits the yard full-scale in Fiscal Year 2024.

Nearby, the Los Angeles-class attack boat USS Hartford (SSN-768) is set to keep some submarine workers occupied while Columbia’s pieces are assembled in Quonset Point and before the stern and bow sections are barged north from Newport News. 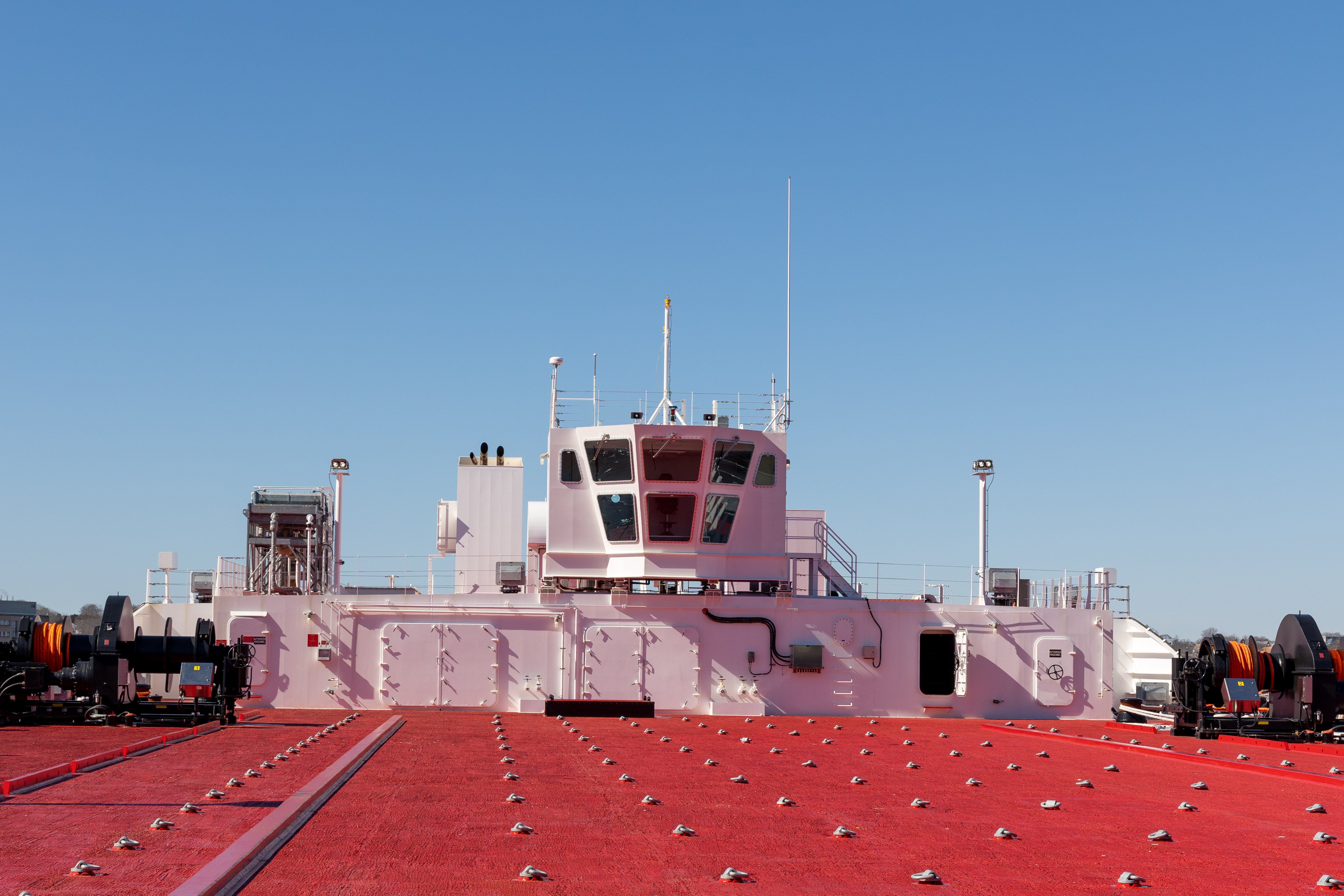 The yard is undertaking an engineered overhaul of the 27-year-old submarine that will help bridge the lull before Columbia, Graney said.

“Hartford is really important to Groton,” he told USNI News.
“We’re on a steady diet of two Virginia submarines a year at least by budget. … Columbia is going to be a significant increase in throughput. We’re going to need to staff up to be able to support that. The way we’re doing that here in Groton is we’re getting the EOH and Hartford. That enables us to start throwing our staff here in Groton, getting the guys some experience, understanding what submarine construction is all about, even though it’s on a maintenance and modernization contract, and then getting them to the point where when Columbia gets here, and we’re in steady-state production, they’re good to go.”
EB is more than halfway done on its expansion ahead of the increased workload, Graney said.

“We’ve got some work to do on the South Yard. There are some more buildings at Quonset that we’ve got to work on and there are a few more items that we’re going to be purchasing,” he said. “But we’re on the downward trend of that spend, and I think we’re going to be done in FY 23.”