Three Russian guided-missile cruisers have been arrayed across the Black Sea and the Mediterranean Sea to counter three NATO carrier strike groups, causing concern in the Pentagon, a U.S. defense official told USNI News on Tuesday.

As of Monday, the three Slava-class cruisers were operating in and around the Aegean Sea – RTS Moskva (121) in the Black Sea, RTS Marshal Ustinov (055) south of Italy and RFS Varyag (011) off the coast of Syria, near Russia’s naval base in Tartus.

Moskva is based in the Black Sea, while Marshal Ustinov traveled from the Northern Fleet and Varyag from the Pacific Fleet. Ustinov and Varyag entered the Mediterranean from opposite ends earlier this month.

The three 11,500-ton Slavas were designed around launchers that can hold 16 SS-N-12 Sandbox anti-ship cruise missiles – each about the size of a telephone pole. Developed in the 1970s, the Slavas and the Sandboxes were designed to take on U.S. and NATO aircraft carriers by overwhelming them with a barrage of high-speed cruise missiles to sink ships.

The position of the cruisers around the Aegean is a complication for the U.S., Italian and French carrier strike groups that have been operating in the Mediterranean the last several weeks. 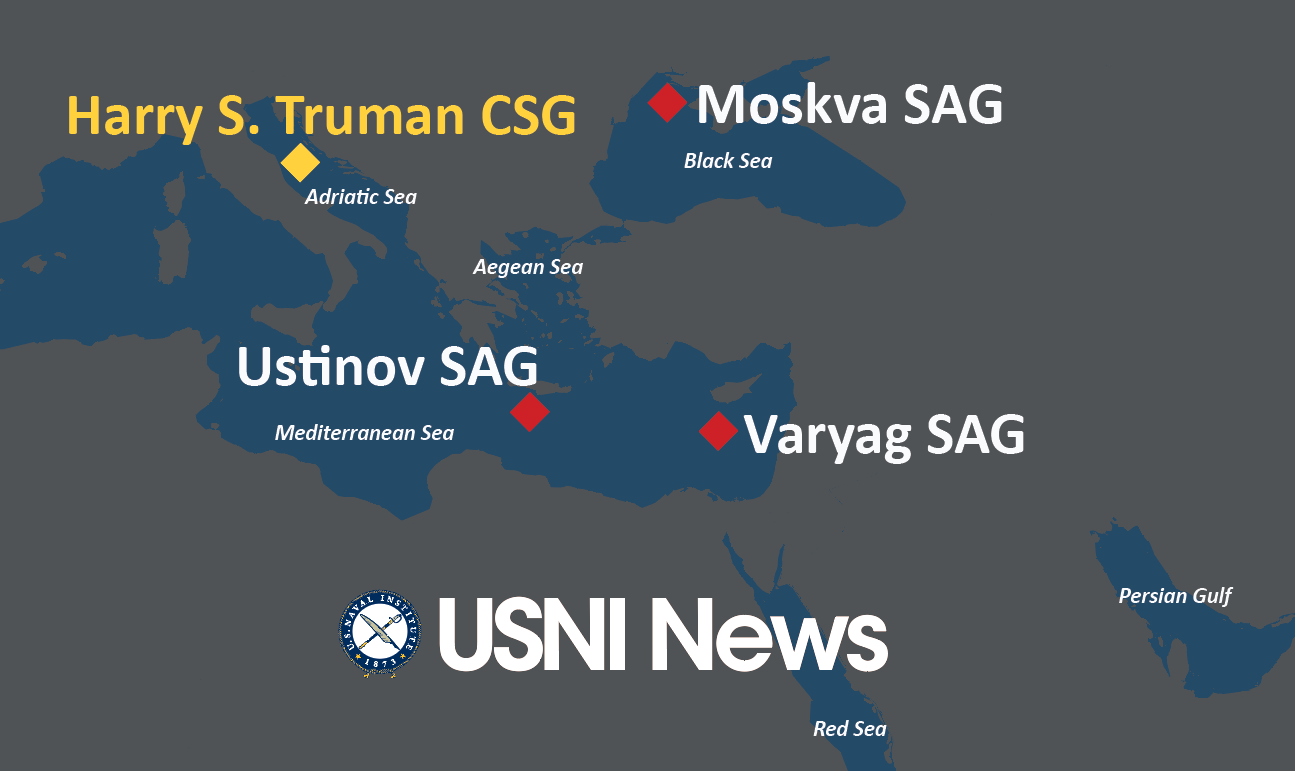 USS Harry S. Truman (CVN-75), its escorts and Carrier Air Wing 1 have been tasked by Defense Secretary Lloyd Austin since late December to remain on station in the region, as tensions between the West and Russia have been enflamed over Russian troops massed at the Russian border. Italian Navy F-35B aircraft carrier ITS Cavour (CVH-550) and French Navy carrier FS Charles de Gaulle (R 91) and their escorts are also operating in the Mediterranean.

As the Russians have massed naval assets in the Mediterranean and Black Sea, the U.S. has surged additional guided-missile cruiser and destroyers to U.S. 6th Fleet. As of Tuesday, the U.S. has about a dozen guided-missile warships operating in the region, USNI News understands.

“Throughout their deployment, they will participate in a range of maritime activities in support of the U.S. 6th Fleet and our NATO allies,” the Navy told USNI News.

While the Russian weapons appear imposing, the Aegis cruisers and destroyers have more sophisticated missile defense systems that outmatch the 1970s and 1980s-era Russian weapons. The risk to the U.S. and NATO ships is if the missile defenders are overwhelmed with the number of weapons the Russians fire and the U.S. and NATO ships run out of interceptors, USNI News understands.

Last week, Chief of Naval Operations Adm. Mike Gilday said the U.S. Navy was prepared to interact with the Russian Navy in the region.

“We operate in and around the Russians and the Chinese all the time. So this is nothing new,” he said on Friday when asked about the Russian cruisers by reporters.
“Given this current situation, the chance for miscalculation is greater. That’s why we train to a very high standard so that when we find our ships in situations like this the [commanders] that we act in a way that’s not provocative and that we communicate very clearly that we’re not cowboys out there. Our intentions are to be responsible professionals out there.”

Meanwhile, as a response to Russia’s declaration that Ukraine regions Donetsk and Luhansk are independent republics, the Pentagon is sending more forces to NATO’s eastern front.