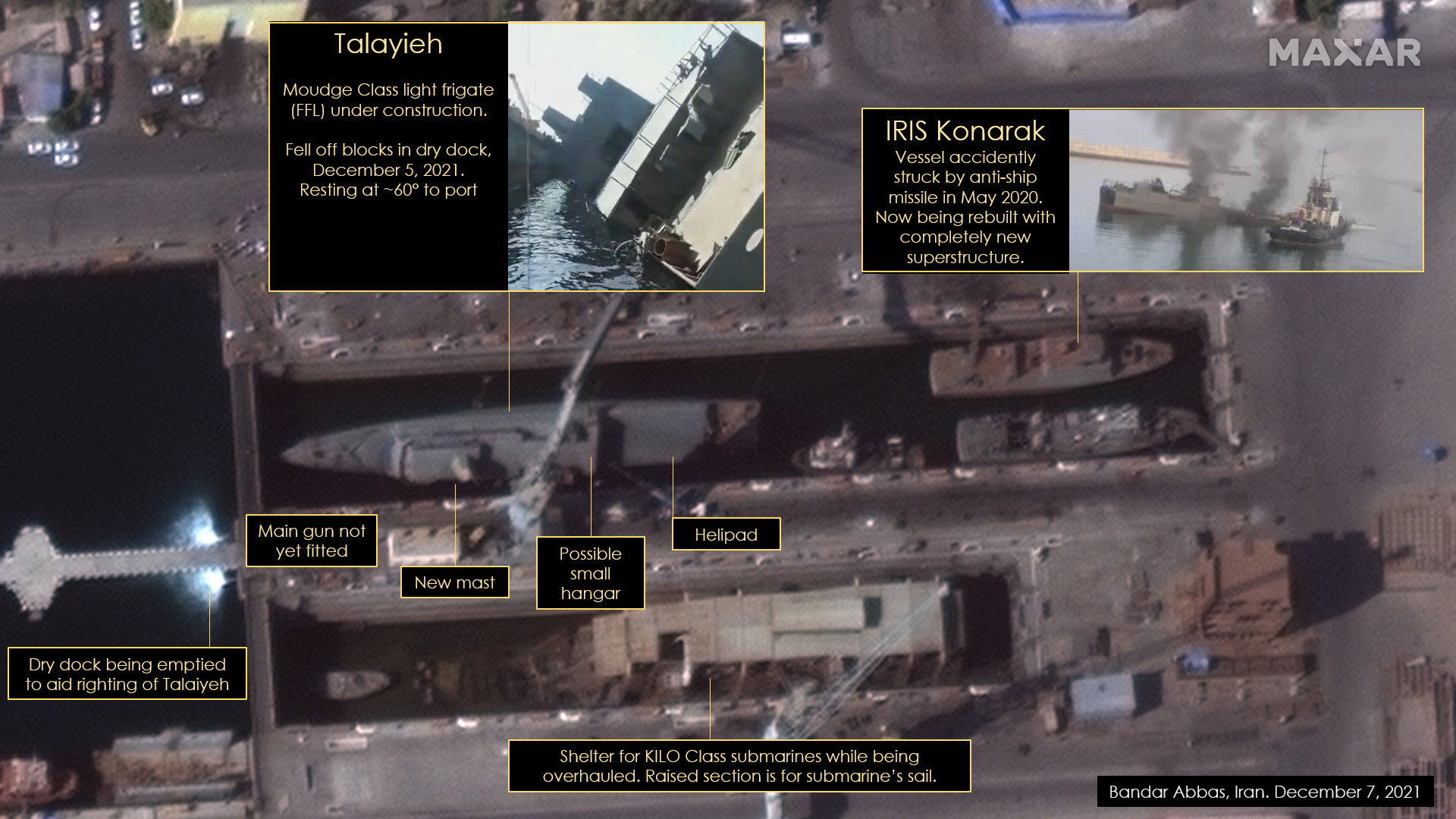 Iran’s drive for naval modernization and self-sufficiency has had another recent setback the when Iranian Navy’s newest frigate capsized in its dry dock. Last week, the Islamic Revolutionary Guard Corps showed off more than 100 of their latest homegrown fast attack craft – new types of missile boats, unique torpedo boats and other craft – in Bandar Abbas.

The frigate – IRIS Talayieh – fell off its blocks when the dry dock was being flooded on Dec 5. The walls of the dry dock prevented it from fully capsizing. It rested at about 60 degrees.

Talayieh is the newest Moudge-class light frigate, based on the British-designed Alvand light frigates, which are the backbone of the Iranian Navy surface fleet. Each Moudge-class ship has been different from the earlier ones. They differ in weapons, sensors, propulsion and facilities, according to images released by the Iranians. Talayieh is the most modern in appearance and has a small hangar ahead of the helipad.

Accidents like this are a risk in any navy, but the Iranian Navy has seen several mishaps. The vessel immediately Talayieh in the same dry dock was also the victim of a serious accident. The Konarak is a utility support vessel and patrol boat that was struck by a friendly anti-ship missile in May 2020.

The resulting fire destroyed the superstructure and almost claimed the ship. But it was towed back to port and is now being rebuilt with a completely new and redesigned superstructure.

In fact, Talayieh is the fifth major incident in recent years. On Jan. 10, 2018, an indigenous frigate, IRIS Damavand, sunk after grounding on a harbor wall during a storm. The accident wrecked the ship’s keel near the helideck.

More recently, the veteran fleet replenishment ship IRIS Kharg caught fire and sunk on June 2, 2021. It was once the largest ship in the Iranian inventory.

The IRGC has also had its own share of mishaps. On July 31, 2020, a target in the shape of a Nimitz-class aircraft carrier belonging to the IRGC sunk accidentally. It had been used as a target in dramatic mock battles, attacked by masses of small vessels. The hulk nearly blocked the entrance to Bandar Abbas harbor. It was a hazard to navigation for months, drifting occasionally with the tide. It was finally broken up, in part by the weather and in part by salvage teams and is finally out of the way. 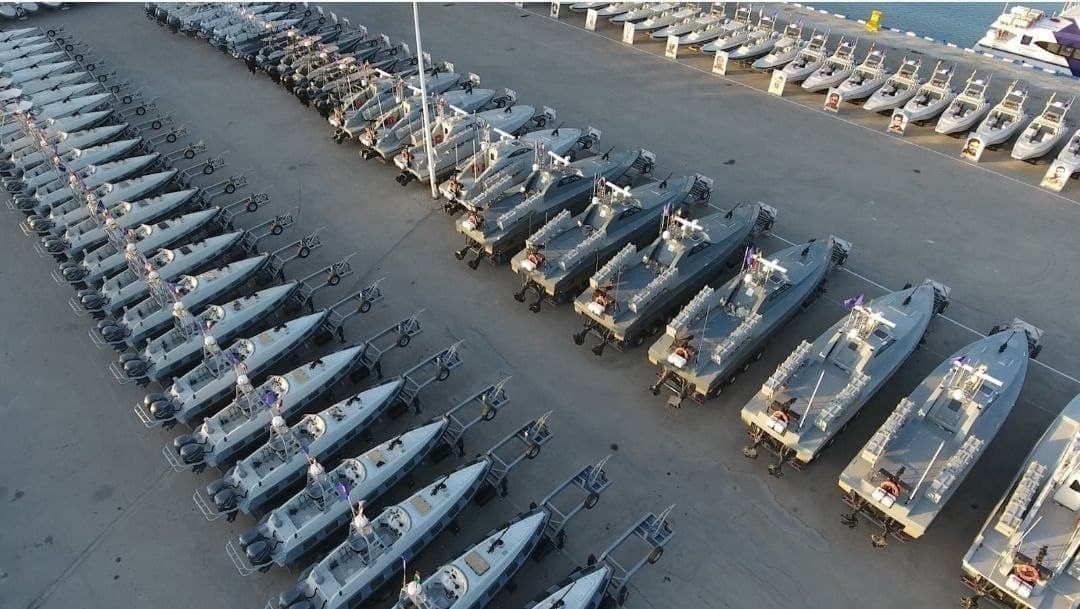 While the regular Navy was handling the Talayieh accident, the IRGC was displaying a new batch of vessels. The IRGC, the religious-political arm of Iranian forces, has a growing naval component. These are the most active in current confrontations between the IRGC and Western navies in the Persian Gulf.

The parades, in which over 100 new boats are shown off to dignities and the cameras, are increasingly frequent. The exact numbers of new vessels need to be treated with caution, but there is no doubt that it is a huge expansion and modernization. Each time some new designs are seen.

The most important new design on display was the Ashura torpedo boat. This is unique in any navy, combining a rigid hull inflatable boat with lightweight torpedoes. The torpedo launchers resemble the North Korean 324mm anti-ship system. These are widely used on other IRGC boats but have not been seen on the RHIBs.

Other new types displayed included four new models of small missile boats. Armed with lightweight anti-ship missiles and machine guns, these are much smaller than most previous IRGC missile boats. The slight variations may be as much a factor of different boatyards being used rather than material design differences.

The IRGCN’s largest missile boat, the corvette-sized Shahid Soleimani-class catamaran, was not present. At least one of the three known hulls being built has started sea trials. Soleimani is a much more conventional design and gives the IRGC more capability in line with the regular Iranian Navy.