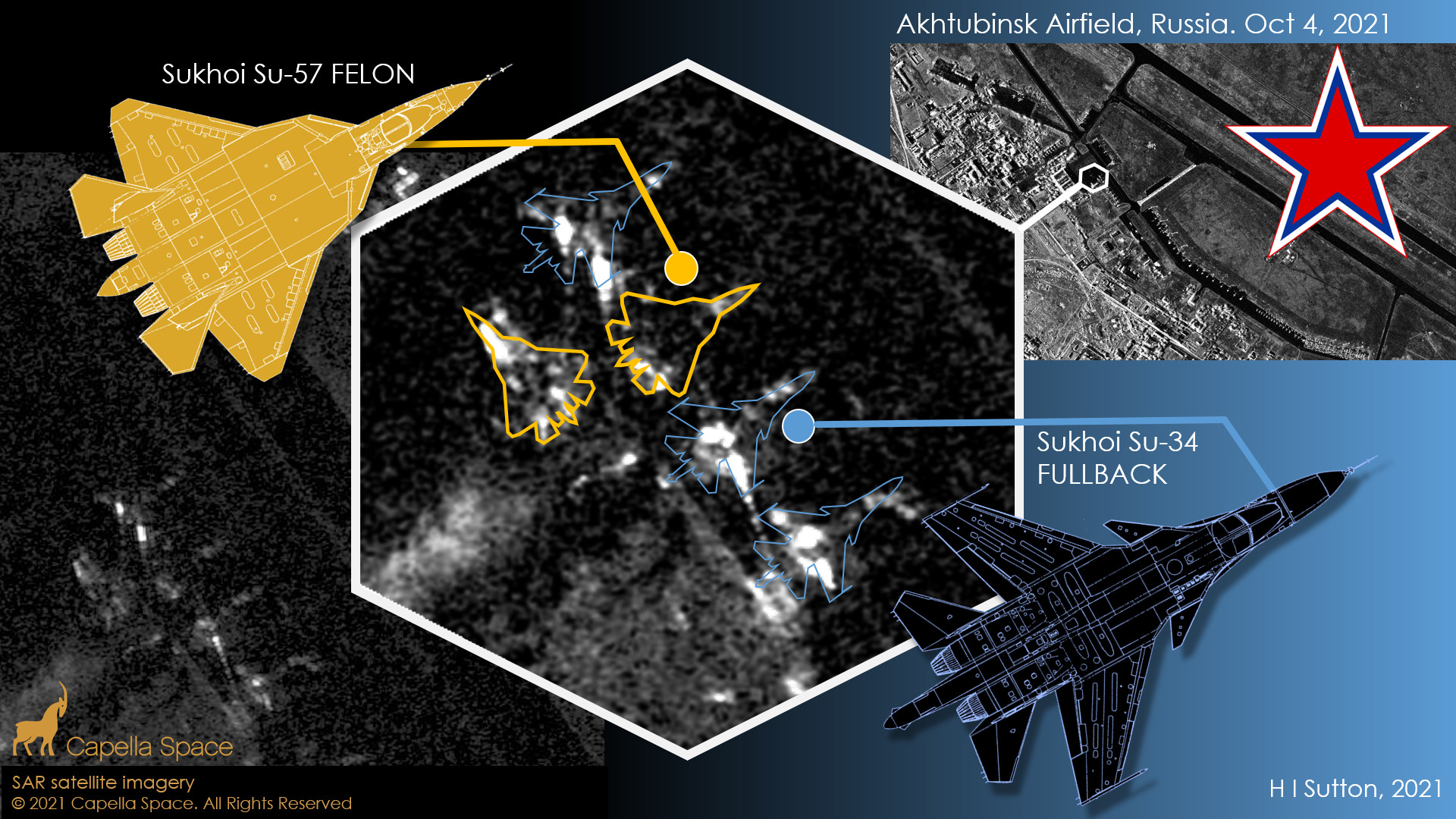 Back in 1955, the Soviet Union flew its bombers in a loop over an air show to give the illusion of having more aircraft than were actually in its arsenal, a move that caused alarm in the West. The resulting ‘bomber gap’ was finally disproven when U2 aircraft were able to systematically photograph Russian airbases. This allowed them to literally count the aircraft. Doing this took incredible resources and several years.

Now commercial satellites allow anyone with internet access to obtain the same information. More users can monitor Russian bombers in near real-time with improvements in high-frequency coverage, quality of imagery, and diversity of providers.

The monitoring of air bases to assess a potential adversary’s strength and readiness remains an important task for navies and other armed forces. Natural targets include long-range maritime reconnaissance aircraft, bombers and strike aircraft. A major way this can be done is by using space-based sensors, which can monitor airfields over time. Many strategically relevant airbases are likely under frequent observation by the myriad of passing satellites.

Capella Space recently provided USNI News images of selected Russian airbases. The company tasked a satellite and the results came back within just a few hours. 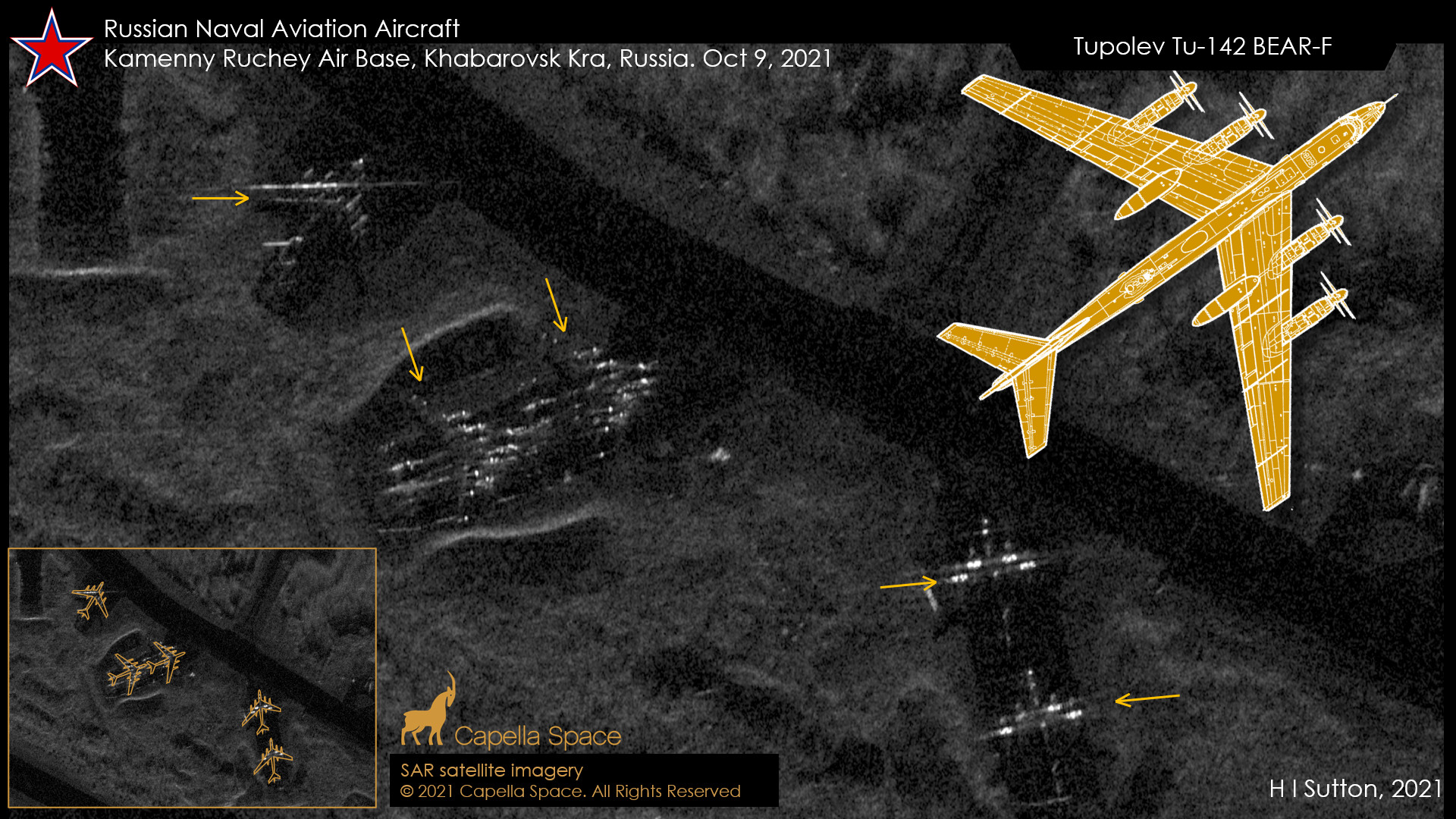 One of the targets chosen was a base with Russian Tupolev Tu-142 Bear maritime reconnaissance aircraft. The aircraft has been the subject of intercept reports off Alaska, Japan or Europe. These massive planes, with distinctive swept wings with four turboprop engines, are directly descended from vintage bombers observed at the air display over 65 years ago.

The distinctive Bear aircraft showed up very clearly in the imagery. The engines and wings provided were clearly visible in synthetic aperture radar imagery. Some Tu-22M Backfire naval bombers were similarly easy to pick up. The radar reflections vary depending on the relative angles of the aircraft to the sensor, but these aircraft are relatively easy for analysts to identify.

Maritime reconnaissance aircraft are typically large and unambiguously and not stealthy. Monitoring them, of any navy, is going to be straightforward. Especially where they use dedicated airbases. For example, telling the difference between a civilian Boeing 737 airliner and a Navy P-8 might prove difficult without additional clues.

A tougher challenge would be Russia’s new generation of stealth fighters. As seen previously with the Type-022 missile boat in China, vehicles that are designed to be low-observable to radar are not hidden from SAR satellites — including the new Russian Su-57 Felon 5th generation fighter.

The imagery Capella provided of Akhtubinsk Airfield in Russia showed a range of aircraft. In one zoomed-in section, two Sukhoi Su-57 Felons are visible. They can be differentiated from the Su-34 Fullbacks parked nearby. Elsewhere on the base other aircraft included Mikoyan MiG-31 Fox Hound fighters and small Su-25 Frog Foots. The fidelity of the images show that it’s possible to distinguish between different types of low-observable aircraft, even if the aircraft are low-observable. This could be relevant to naval planners as more countries adopt both land-based and carrier-based fifth-generation fighters.