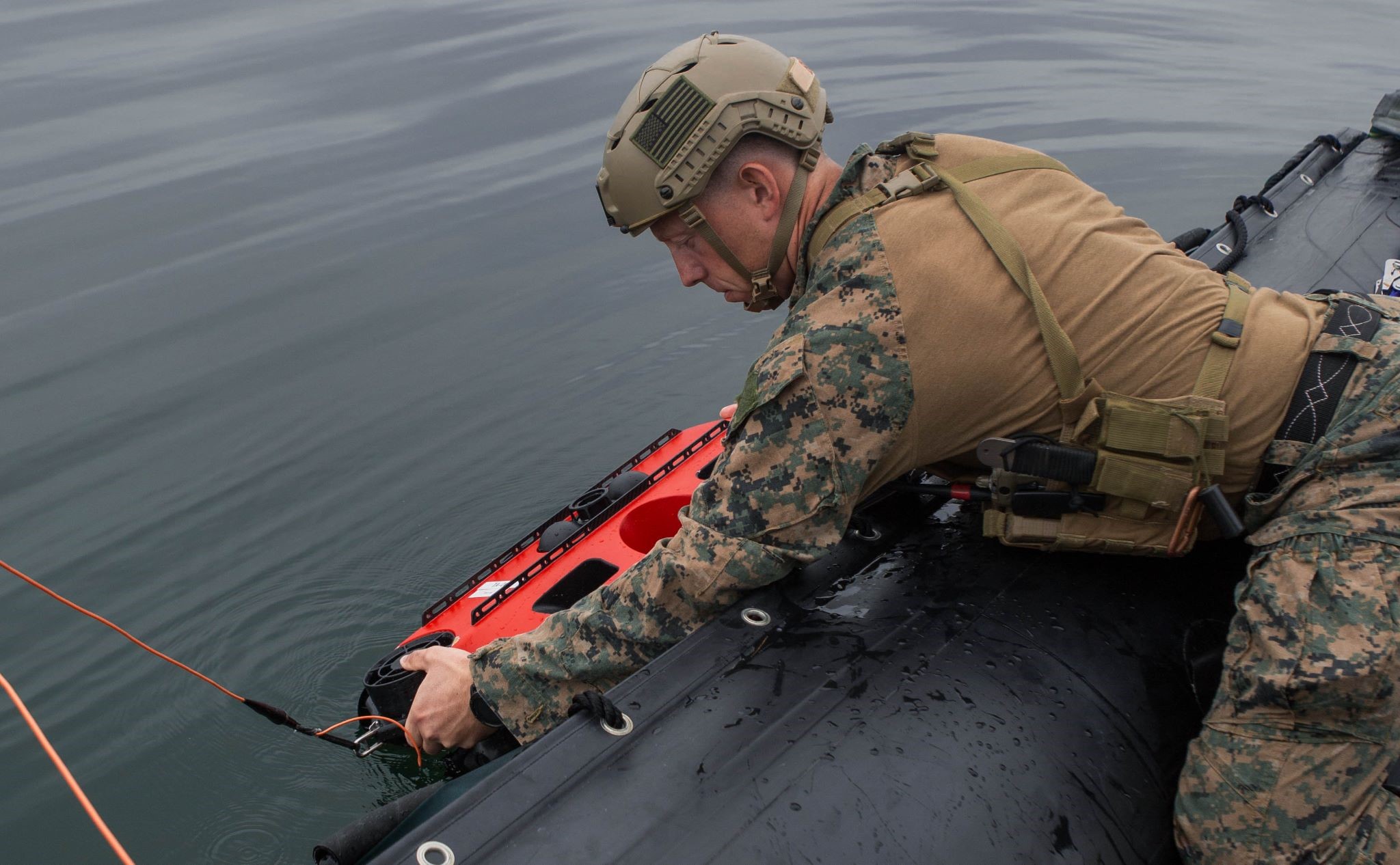 The Marine Corps is expanding its mission set to include operating robots in shallow waters, a first for the service that comes as it prepares to operate on islands in the Indo-Pacific.

The Explosive Ordnance Disposal Remotely Operated Vehicle is a box-shaped robot that can navigate in shallow waters, where it will be able to identify and neutralize threats, according to a Marine Corps Systems Command news release issued Thursday.

The robot, also referred to as an ROV for remotely operated vehicle, has high-definition video capability and the ability to provide real-time feedback for explosive ordnance disposal divers, according to the release. It also uses sound navigation and ranging sensors.

“This way, you don’t have to risk people and robots, they have a little longer range. And so it’s a natural evolution and a very sensible one,” Mark Cancian, a senior advisor at the Center for Strategic and International Studies, told USNI News.

The Marine Corps can use the robot for various amphibious missions and it can save Marines from having to do dangerous EOD work or tiring swims, Master Sgt. Patrick Hilty, an EOD project officer, said in the news release.

“This robot gives Marines eyes in the water. It is a capability the Marine Corps has never before had,” Hilty said.

Robots are not new, Cancian noted. The Marines have been using them for a while to neutralize land-based explosive devices.

This is an evolution for the Marines’ approach to counter mine strategies, according to Cancian. Naval mines in shallow waters continue to be an issue. Now, Marines can stay on the ship while addressing potential threats.

The ROV has a tether feature, which allows the explosive ordnance technicians to keep away from the devices, according Marine Corps Systems Command. Before, Marines would need to swim toward the explosive hazards to identify and neutralize them.

While the ROV will be used to identify and neutralize threats in support of global littoral operations, it could eventually be adapted for more uses, Cancian said.

He pointed to the unmanned aerial vehicle, which had an initial purpose of reconnaissance before the military adapted it to also carry a missile. For example, the ROV could be adapted to lay mines in addition to neutralizing them, Cancian said.

Fielding the ROV comes as both the Navy and Marine Corps are working to expand their use of unmanned platforms for various missions – including the Marines’ Expeditionary Advanced Base Operations (EABO) and Littoral Operations in a Contested Environment (LOCE). EABO would see Marines moving between expeditionary bases set up on islands and shorelines in a region like the Pacific while working with the Navy fleet.

Marine Corps Systems Command in the release noted that the Navy already has ROV capabilities, which will allow the two branches to work together.

However, it is unusual for the Marines to conduct ROV missions from the ship, Cancian noted. Usually, that would be under the Navy’s jurisdiction, with the Marines taking over at the shore line.

It is a shift in how the Marine Corps operates, Hilty said in the release.

The ROV, as well as other technology developed as part of the Littoral Explosive Ordnance Neutralization Family of Systems, will be able to complement Navy EOD teams, allowing for joint operations, according to the release.

Although the Marines may be shifting toward more water missions, the advancement in technology signals a continued commitment to amphibious missions, Cancian said.