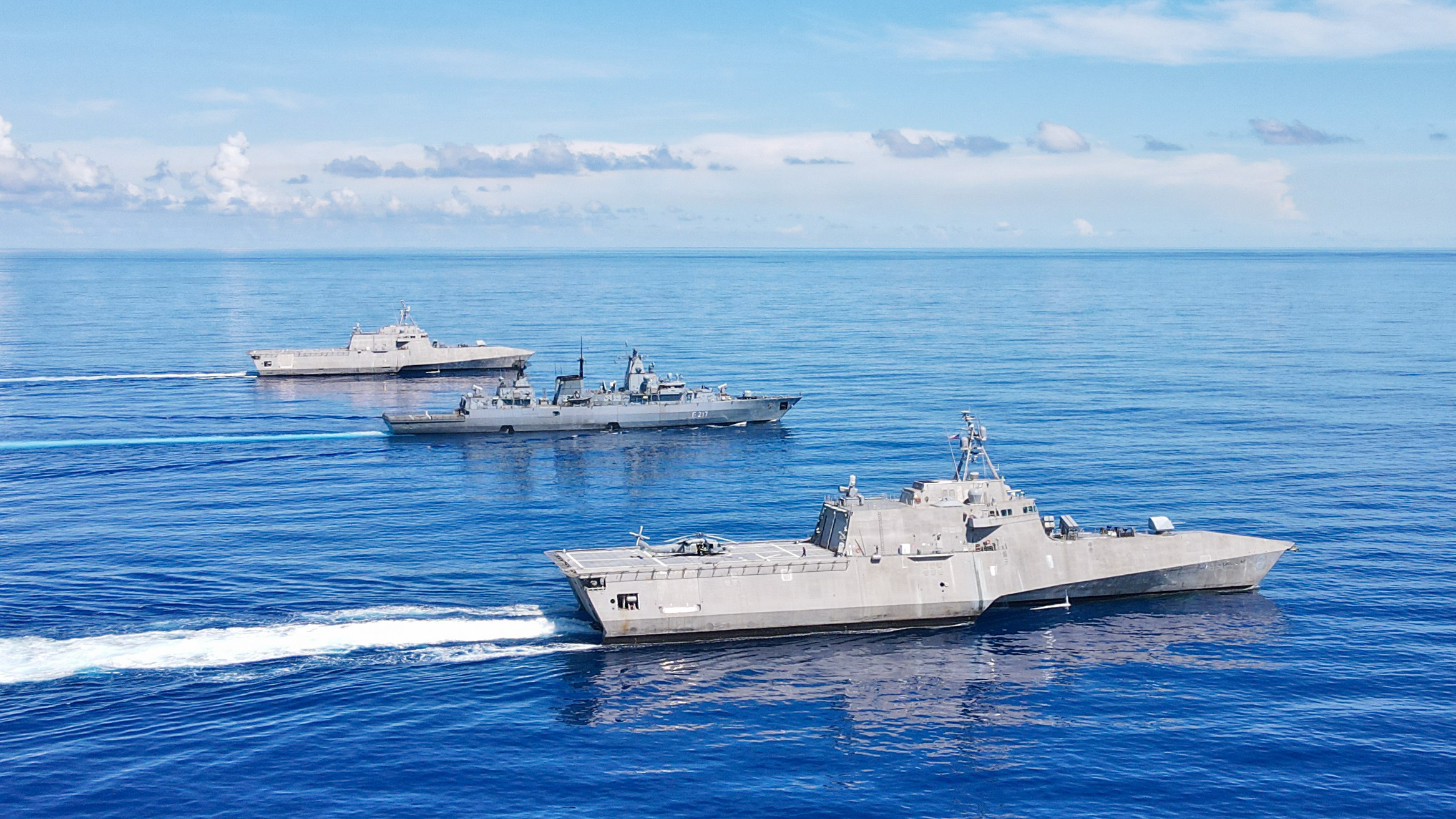 KUALA LUMPUR – Three Littoral Combat Ships deployed in the Indo-Pacific – USS Jackson (LCS-6), USS Tulsa (LCS-16) and USS Charleston (LCS-18) – have been operating on a high tempo across the region, the commander of the Singapore-based destroyer squadron said Tuesday.

“We’ve had LCSs operate in the region from Sri Lanka to Guam to Japan and everywhere in between. They have been all over the region with brief stops for fuel in Singapore, the Philippines, Sri Lanka, Okinawa and Palau. We’ve had LCSs operate in surface action groups with destroyers from DESRON 15, integrate with the America Expeditionary Strike Group (ESG) when DESRON 7 was the sea combat commander for the America ESG [and] integrate and conduct operations with the Carl Vinson Carrier Strike Group. And you’ve seen the integration we have done with the Marine Corps among others,” Capt. Tom Ogden, the commodore of Destroyer Squadron 7 (DESRON 7), told reporters on Tuesday.

Maintaining a healthy balance between generating readiness via maintenance and keeping the ships underway has been a priority for DESRON 7 in regard to the LCS.

“We concentrate a lot on making sure we get the balance right between maintaining and operating the ships,” Ogden said. The integration of the maintenance execution teams – active duty sailors conducting the maintenance – with contractor maintenance has significantly benefitted the LCS, he said.

“With the same amount of time committed to doing maintenance, we have increased the operational availability of LCS in the Pacific [to] higher than we’ve ever seen it.” Ogden said the success in ensuring the balance between maintenance and operations is a team effort.

Task Force LCS, led by Rear Adm. Robert Nowakowski, has been making use of data analytics to find and target LCS systems that have previously hampered operational availability and ensure such incidents no longer occur. As an example, Ogden cited the hydraulic steerable ram component of the Independence-class LCS waterjets, which had weak points. As a result, DESRON 7 has worked with the type commander to ensure that the specific replacement parts to those components were deployed forward to where the LCS were maintained and work packages put together so the components could be replaced quickly.

“We recently did one and it took a day and a half to complete, where else in the past, I’ve seen it take a lot longer,” he said.

Integration with the Marine Corps in teaming operations is ongoing and moving smoothly. Ogden said DESRON 7 sitting under the America Expeditionary Strike Group allows his command to work and coordinate closely with the 31st Marine Expeditionary Unit (MEU). Among current efforts in LCS/USMC integration is enabling Marines to familiarize themselves with the capabilities and operations of the Naval Strike Missiles, which the LCS are equipped with and the Marines are planning to field in the future as a ground-based launched variant known as the Navy-Marine Expeditionary Ship Interdiction System (NMESIS).

Theatre Security Cooperation missions also are a primary mission for DESRON 7, particularly with the Cooperation Afloat Readiness and Training (CARAT) and Maritime Training Activity (MTA) exercises. Charleston was in Subic Bay, Philippines and completed a contactless port visit to Subic Bay for crew rest and replenishment of supplies, along with a planned participation in Exercise MTA Sama Sama. The exercise took place virtually in mid-October with the U.S. and the Philippines inviting the French Navy and Japan Maritime Self-Defense Force (JMSDF) to participate. But a planned sea phase for the exercise had to be canceled due to weather conditions around the Philippines. The sea phase was slated to involve Charleston, Spearhead-class fast transport USNS Millinocket (T-EPF 3), USNS Big Horn (T-AO-198) and a P-8A Posiedon maritime patrol aircraft. The Philippines were scheduled to participate with a Philippine Navy frigate, a Philippine Coast Guard Multi-Role Response Vessel and maritime patrol aircraft from the Philippine Navy. Japan was also planning deploy a maritime patrol aircraft, while French Navy officers would act as on-shore observers for the at-sea phase.

While more LCS are in the region, the Navy is limited by ongoing COVID-19 risks, as well as the time to work with partners in the region, Ogden said.

“We’ve got a good staff, we’ve got a great group of people and the LCSs are a hundred percent manned. We’re good on that from a DESRON 7 perspective. We just wish we had more time to do everything and we could overcome the COVID situation. However much we try to make it [as] good as possible over a video conference, it’s not the same as being in person,” Ogden said.