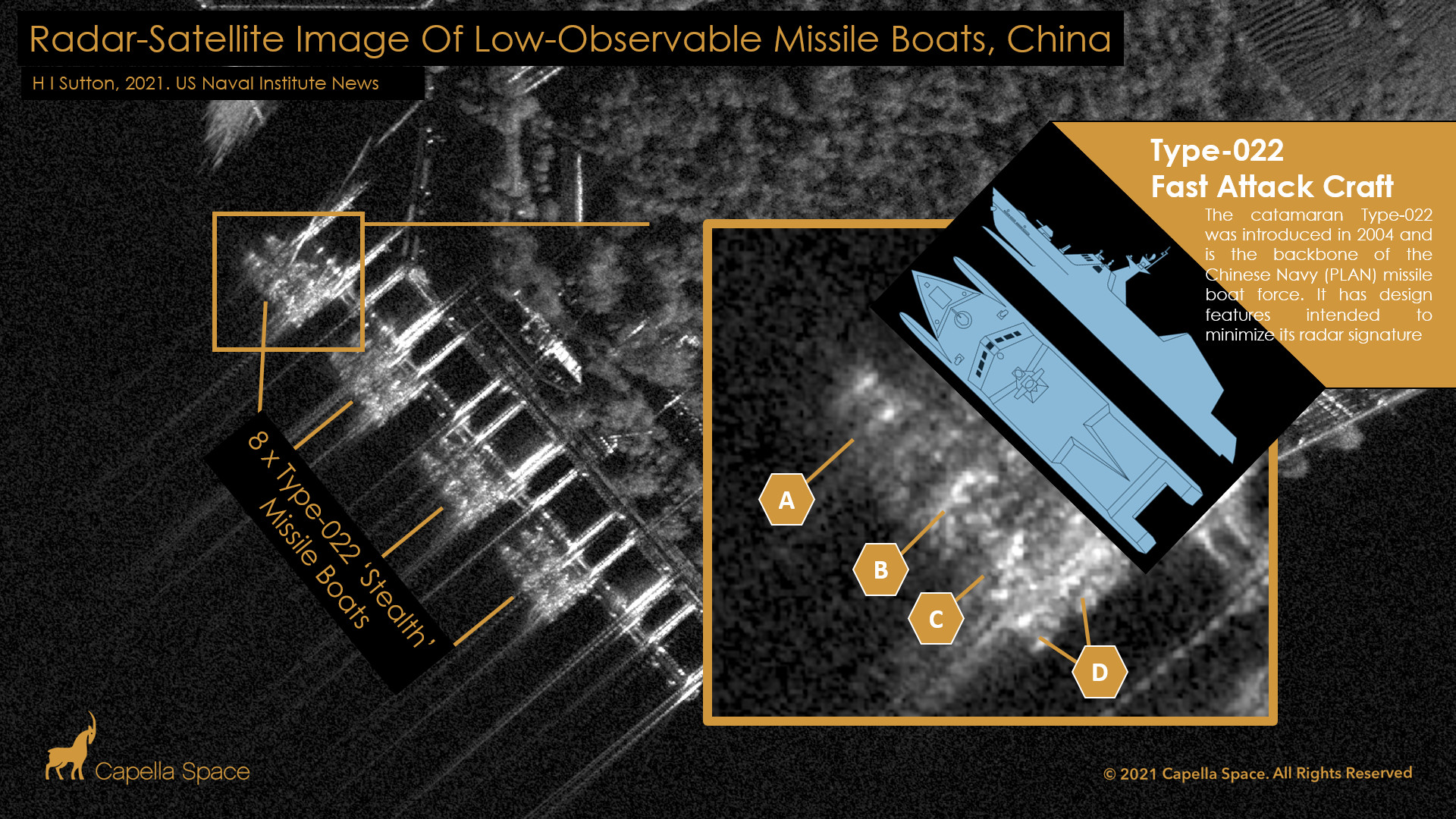 Although popularly described as ‘stealthy’, China’s Type-022 missile boat is clearly visible in Synthetic Aperture Radar (SAR) satellite imagery provided by Capella Space Inc. The bow (A) is discernable, as is the mast (B), missile launchers (C) and catamaran hulls at the stern (D). H I Sutton image used with permission

Warships designs are increasingly taking their radar signature into account. Sharp angles that deflect radar waves and coatings that absorb radar energy have been standard features of warship designs for most new warships over the last 20 years. An extreme example is the class of the Chinese Navy’s (PLAN) Type-022 missile boat. Its lines are angled and sloped to deflect incoming radar waves, like a stealth fighter. Everything is carefully angled and even the window frames have saw-tooth edges, according to published photos of the class.

However, when viewed from space using a radar-equipped satellite, they show up very well. The Type-022’s unique layout even creates a distinctive signature that can easily be identified. Capella Space, a company that provides radar-satellite imagery, found that the so-called stealth missile boats show up when they’re moored in their bases. 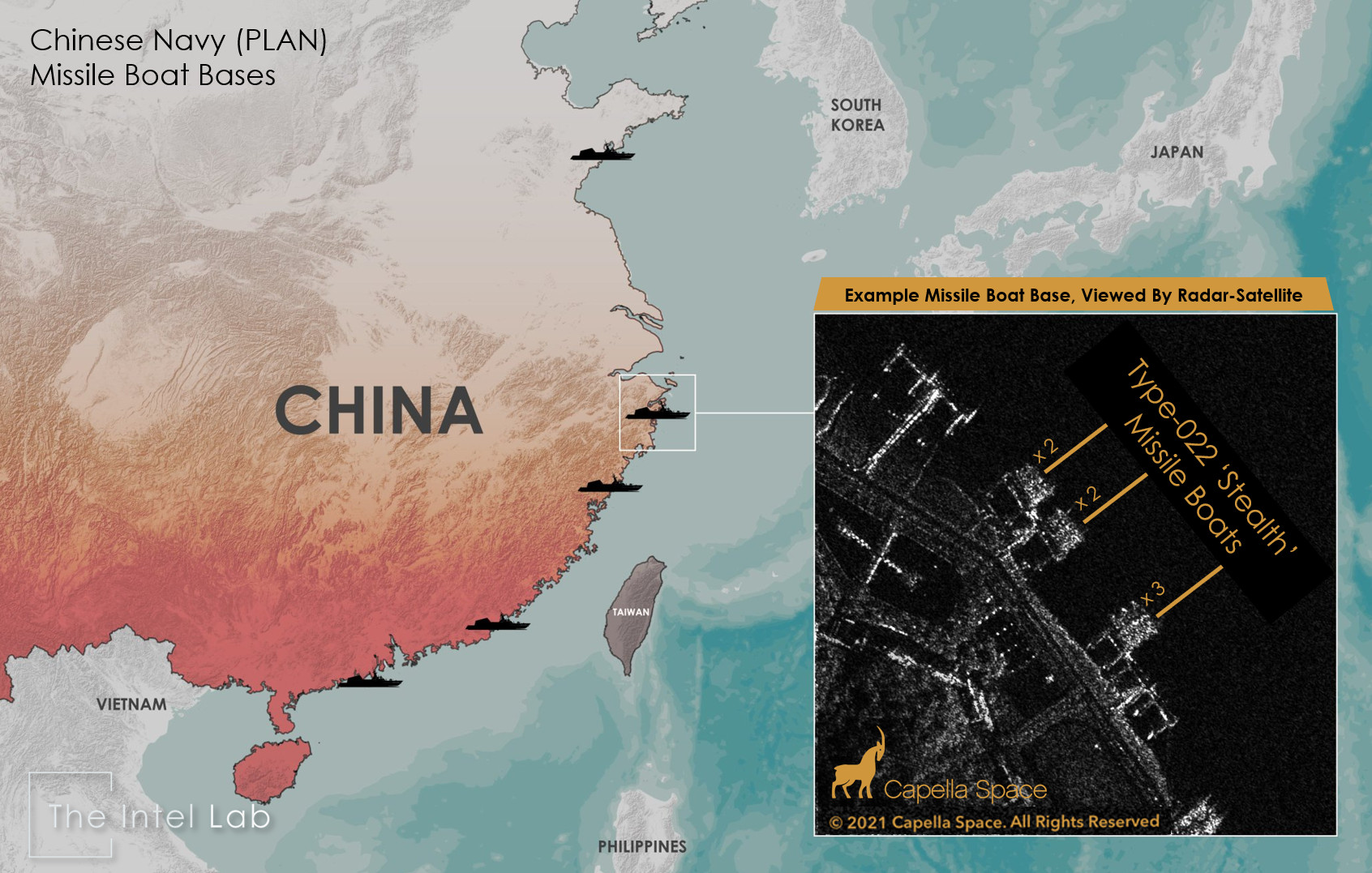 The Type-022 Houbei-class was introduced into PLAN service around 2004. Since then, a very large number have been built, with estimates between about 40 and 80 hulls. Unlike most of the Chinese Navy’s larger warships, it is operated in distinct squadrons, typically comprised of eight vessels.

They operate in swarms, providing combined firepower of 64 YJ-83 anti-ship missiles. These are loosely equivalent in capability to the U.S. Navy’s Harpoon missile and have an effective range of about 100 nautical miles. In a conflict scenario, such as an invasion of Taiwan, the ships would rely on stealth to survive long enough to launch overwhelming missile strikes and survive.

The design uses a wide catamaran hull. This allows the inward-sloping sides to extend all the way to the waterline, like Lockheed’s famous Sea Shadow stealth boat. Its form is less extreme than that of the Sea Shadow’s, with concessions to operating factors. Its teeth, the anti-ship missiles, are carried in two covered hangars to hide them from radar. Overall, the boat can be described as low-observable, meaning that its radar signature should be considerably smaller than one would expect for a regular ship of this size. 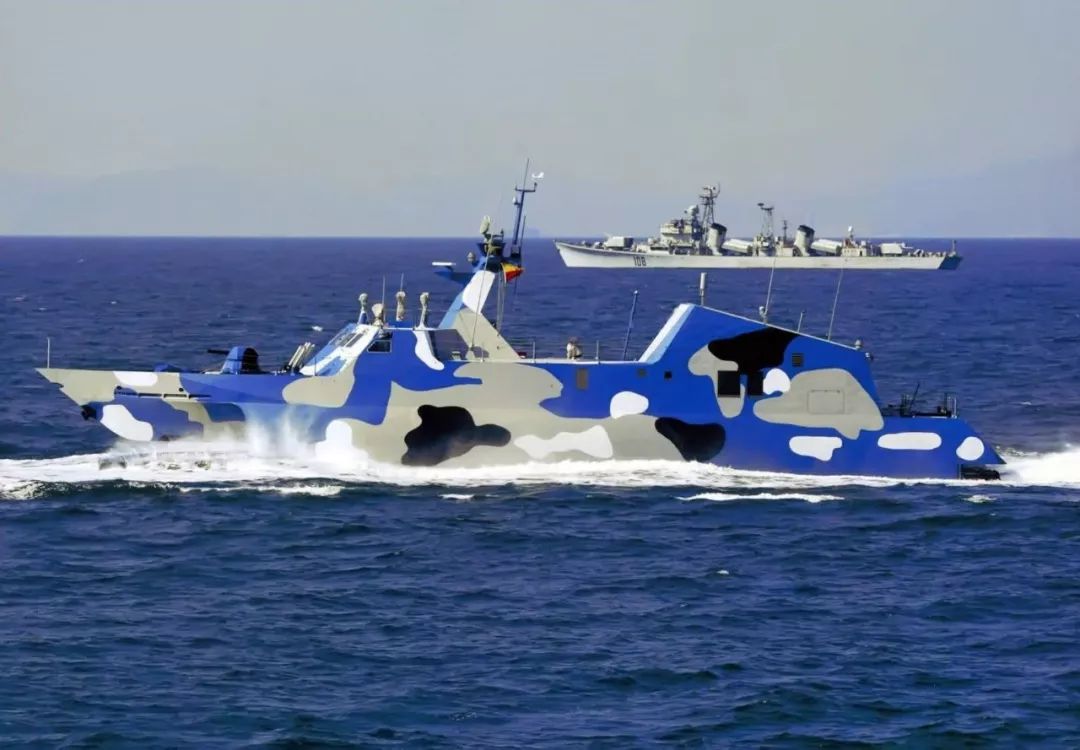 The angle of the radar, and frequency of the waves, will impact visibility. Radar satellites like Capella’s use synthetic aperture radar (SAR).

Unlike traditional imagery satellites, SAR can see through clouds and at night. The latest imagery, reviewed by USNI News, provides very high resolution (VHR) imagery down to 50cm resolution. They also have low noise levels and the underlying data can be analyzed to get the best results.

In this case, if the Type-022’s stealth ability can be called into question — at least from the angles and radar frequencies used by the satellites. The radar picture may look very different to a regular surface search radar, or the homing seeker of a missile.

The ability of radar-satellites to observe warships intended to be stealthy is a capability that until recently was limited to a handful of powerful government agencies around the world. But now it’s relatively easy to obtain.

It is even possible to point the satellite where you want it. With their very high revisit rate, the intelligence can be extremely timely and the same set of locations can easily be monitored over time to see changes in operating patterns. This could include leading indicators of planned military action. The capabilities are low-latency and highly automated – and give greater visibility to international naval operations.