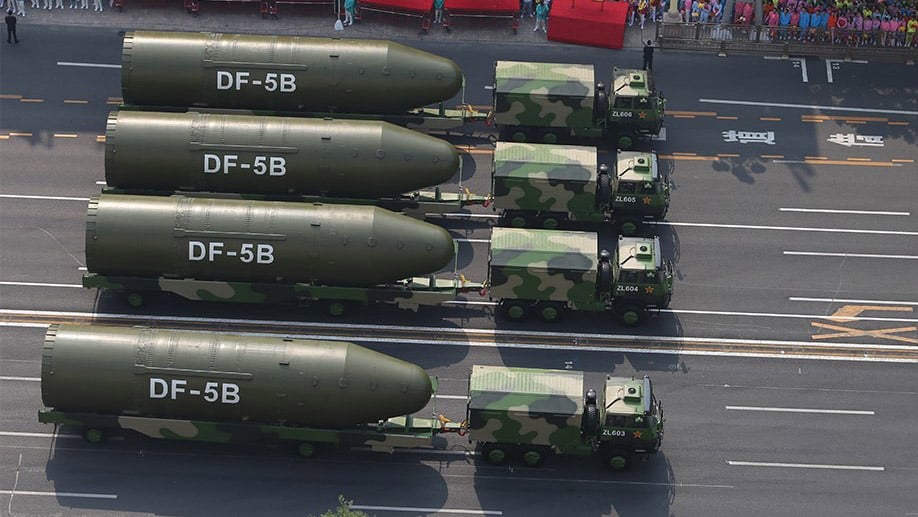 The speed of China’s “unprecedented nuclear modernization” and its “build-out of a modernized triad” is the biggest concern for the vice chairman of the Joint Chiefs of Staff as he nears the end of his tenure.

“There’re no limits on what they can put in those silos,” adding to the threat, Air Force Gen. John Hyten said during a Brookings Institution online forum on Monday.

The Federation of American Scientists, which tracks nuclear weapons programs, reported in July that China is building a second field of up to 250 more silos. Hyten, who is planning to leave the Pentagon this year, said each missile could carry 10 warheads.

At the Brookings event, Hyten said “the current administration has made it clear China is the pacing threat” and the Pentagon should be focused on that. He noted that although the 2018 National Defense Strategy was “threat-based” instead of “capabilities-based,” the U.S. is “still moving slow, unbelievably slow” in reflecting that change.

“The problem [with a ‘capabilities-based’ strategy] is you telegraph that to everybody” who then invests in countermeasures or asymmetric approaches for their own security, as Moscow and Beijing did.

Unlike the Soviet Union, where both powers maintained a nuclear deterrent and the U.S. had NATO allies in Europe to keep the deterrent credible, Hyten said “China is a very different competitor” because of its global economic power. We have to see who our partners are in the Pacific,” he said.

Reflecting on the recent several-hour telephone conversation between President Joe Biden and President Xi Jinping, Hyten said “I hope we can broaden that also down to mil to mil,” referring to military-to-military relations between the U.S. and China. In late August, an assistant defense secretary and Chinese senior officer held a secure video conference to discuss mutual concerns, Reuters reported at the time.

But there has been no formal meeting between Defense Secretary Lloyd Austin and a Chinese counterpart that could lay the framework for a series of “mil to mil” talks to reduce miscalculations and concerns.

Hyten said “you always have to be concerned about the ‘Thucydides Trap,'” where a rising great power and an existing power inevitably come into conflict, leading to war.

Hyten said the stakes are much higher in an age when a number of nations have nuclear weapons. Looking forward, the U.S. still must be able “to hold any target on the planet at risk.” It was in this area that he saw great value in conventionally-armed hypersonics and long-range cruise missiles that could provide the deterrent without an escalation to nuclear war.

On the defensive side, Hyten said, “the technology has advanced” on directed energy, so it is a capability worth pursuing. He said current missile defense systems, like the ground-based interceptors, remain effective against the North Korean threat, but are expensive weapons to use in bringing down much lower cost missiles.

Hyten said the Joint Requirements Oversight Council (JROC), which he chairs and consists of the vice chiefs of the other services, has taken a more active role to ensure that individual service projects fit within the Joint Warfighting Concept, especially when it comes to new technology.

The “four orphans” the council identified that need much greater attention under the concept are integrated joint fires, logistics delivery in a contested region, maintaining the information advantage over competitors, and joint command and control.

“My biggest concerns is not with today but tomorrow,” Hyten said. As an example of that, he cited the “thousands of miles of copper cable,” now over 50 years old, that underpins nuclear command and control that will have to be replaced. “It’s going to be digital” and it has to have ”built-in resilience.”