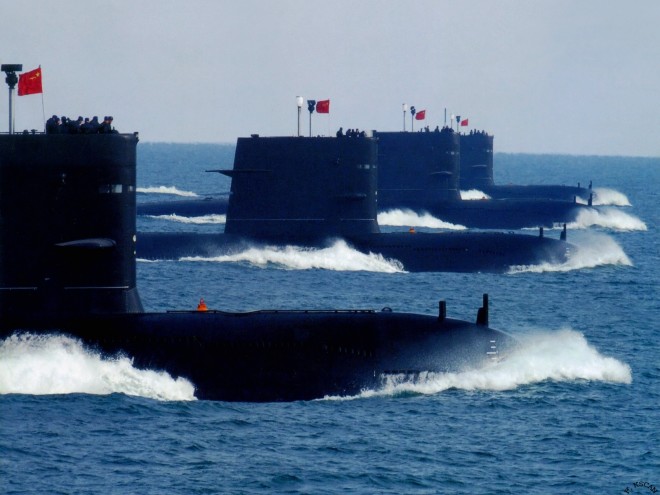 KUALA LUMPUR – The Japanese Ministry of Defense detected a Chinese submarine operating in the contiguous zone of Japan’s southern islands, they announced in a Sept. 12 press release, and the Japan Maritime Self Defense Force (JMSDF) air and naval units are maintaining surveillance on the submarine.

The submarine had been spotted by the JMSDF in the morning of Sept. 10 moving in a northwest direction while in the eastern waters off Amami Oshima island, which lies between Kyushu and Okinawa, according to the Ministry of Defense statement. While the submarine stayed submerged, it was believed to be Chinese, as it had been operating in the vicinity of a Type 052D Luyang III class destroyer. It was spotted sailing north in the same area the next morning, and by Sunday, Sept. 12, the submarine was in the vicinity of the contiguous zone southwest of the uninhabited Japanese island of Yokoatejima, which lies 32 nautical miles northwest of Amami Oshima.

The contiguous zone defined under the United Nations Convention on the Law of the Sea covers up to 12 nautical miles outside a nation’s territorial sea. In the contiguous zone, a coastal state may prevent infringement of its customs, fiscal, immigration or sanitary laws and regulations and punish infringement of those laws committed within its territory or territorial sea. International law does not have any regulations on military ships operating in the contiguous zone of another country, though it can be seen as a provocative act.

Defence Minister Nobuo Kishi was quoted in the release as telling the Ministry to gather all information and stay alert on the situation. The release also said P-1 Maritime Patrol Aircrafts of Fleet Air Wing 1 at Kanoya Air Base and Fleet Air Wing 4 at Naval Air Facility Atsugi and P-3 Orions of Fleet Air Wing 5 at Naha Air Base, along with the destroyers JS Sazanami (DD113) and JS Harusame (DD102), were monitoring the activities of the submarine.

In other developments, the JMSDF wrapped up its Pacific Crown series of exercises with the Royal Navy’s Queen Elizabeth Carrier Strike Group 21 (CSG 21) with the fourth of the serials, Pacific Crown 21-4 from Sept. 8-9 in the waters south of Kanto. JMSDF ships in the exercise were the DDHs JS Izumo (DDH183) and JS Ise (DDH182) along with F-35As of the Japan Air Self Defense Force while UK CSG 21 ships in the exercise were carrier HMS Queen Elizabeth (R08), destroyers HMS Defender (D36) and HMNLS Evertsen (F805) and the replenishment ships RFA Tidespring (A136) and RFA Fort Victoria (A387). USS The Sullivans (DDG68) which normally forms part of the Queen Elizabeth’s escorting destroyers had detached from the group to conduct a port visit to Commander, Fleet Activities Yokosuka (CFAY) on September 8 though it took part in the preceding and larger Pacific Crown 21-3 held from September 2-7 in the waters south of Japan.

The JMSDF release on the Pacific Crown 21-4 Exercise quoted the commander of JMSDF Escort Flotilla 2, Rear Adm. Konno Yasuki stating that, “Through this training, we enhanced our tactical skills and cooperation with participating navies. In addition to Ise, Izumo that will be capable of carrying F-35B fighter in the future, was able to operate together with the Royal Navy’s latest aircraft carrier in this exercise symbolizes that the defense cooperation between Japan and UK has entered a new phase.”

The U.K. CSG 21 consists of Queen Elizabeth and embarked aircraft which include The “Wake Island Avengers” of U.S. Marine Corps Fighter Attack Squadron (VMFA) 211 who are embarked and integrated with Royal Air Force 617 Squadron “The Dambusters.” Destroyer HMS Diamond (D34), was forced to drop out of the group in July and dock in Italy due to problems with its engine. The ship sailed out of Taranto on Sept. 1 after completing repairs and transited the Suez Canal on Sept. 5 to rejoin the group, the ship tweeted out.

The Royal Canadian Navy frigate HMCS Winnipeg (FFH338) joined both exercises. Winnipeg departed Canada on Aug. 17 for a four-month deployment with Winnipeg, replacing HMCS Calgary (FFH335) on Canada’s Operations Projection and Neon. Operation Projection is the Royal Canadian Navy’s deployments in support of Canada’s commitment to global peace and stability with deployed ships both operating on national tasks and in support of allies and partners, while Operation Neon is Canada’s contribution to the United Nations Security Council sanctions imposed against North Korea by conducting surveillance operations to identify suspected maritime sanctions evasion activities.

The main body of the CSG 21 Strike Group is currently in Guam with other ships in the group that are currently operating independently in the region. Commodore Steve Moorhouse, commander of CSG21, posted on Twitter on Sept. 13 that the group was now pierside for a mid-deployment maintenance period, though he did not disclose the location. Queen Elizabeth’s Twitter account subsequently posted that the carrier was in Guam.

Further south, the Royal New Zealand Navy announced on Sept. 9 the departure during the week of a task group comprised of the frigate HMNZS Te Kaha (F77) and replenishment tanker HMNZS Aotearoa (A11), along with an embarked Seasprite helicopter, for a two- to three-month deployment to the Asia Pacific, which would include participation in the Five Power Defence Arrangement (FPDA) exercise Bersama Gold 21, to be held off Malaysia and Singapore in October, and also interactions with CSG 21. Te Kaha returned to New Zealand in December 2020 after completing an upgrade in Canada, and this marks its first operational deployment since then. Similarly, Aotearoa is making its first operational deployment to South East Asia since its commissioning in July 2020. RNZN Maritime Component Commander Commodore Mat Williams stated in the release announcing the deployment that the task group was likely to operate with French Forces in the Pacific en route to Bersama Gold 21 and the Royal Australian Navy on the ships’ return to New Zealand, in addition to interactions with Indonesia, Malaysia, and Singapore during the deployment.