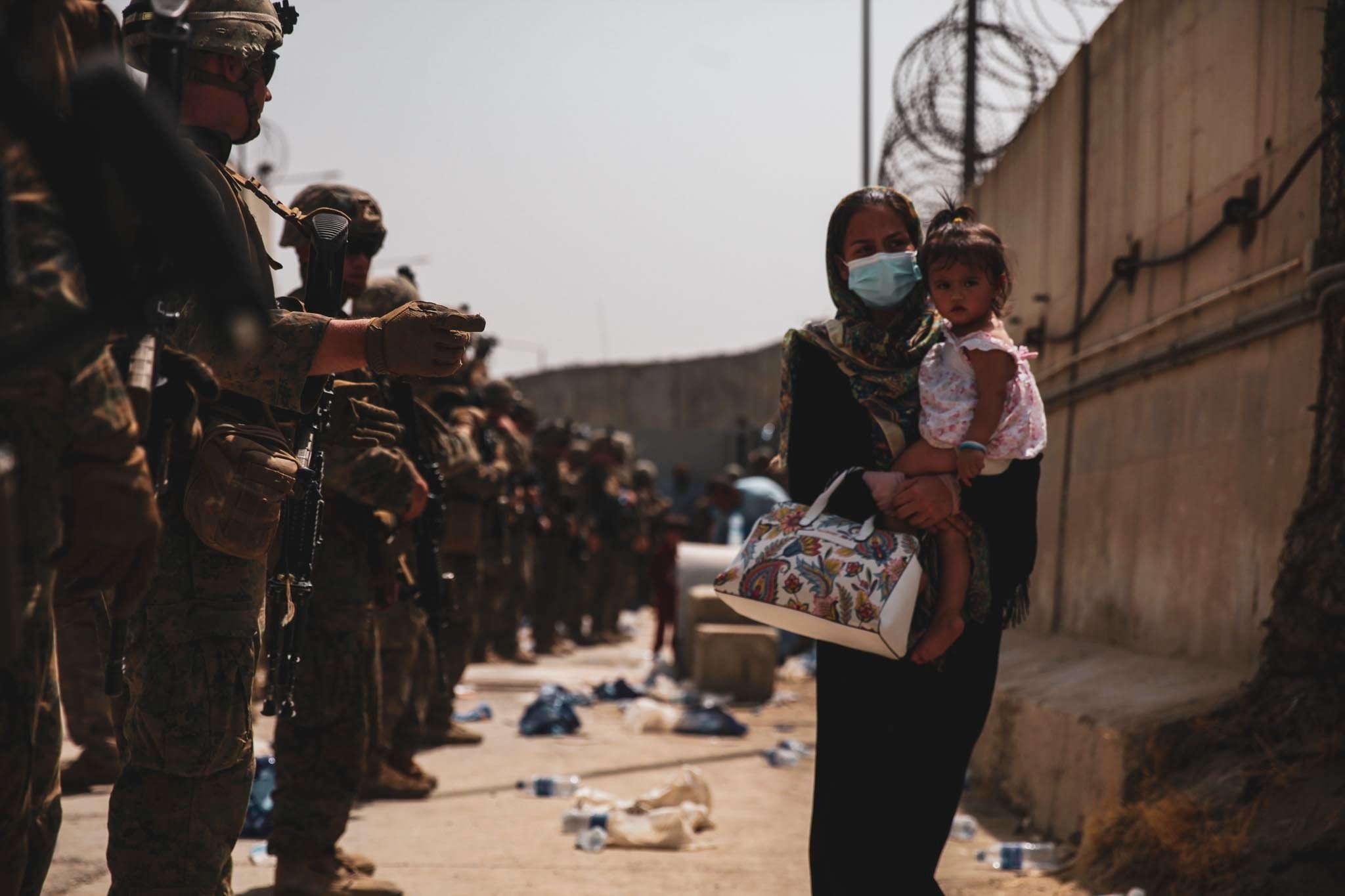 Marines with the 24th Expeditionary Unit (MEU) guide an evacuee during an evacuation at Hamid Karzai International Airport, Kabul, Afghanistan on Aug. 18, 2021. US Marine Corps Photo

More than 2,000 Marines were supporting evacuation operations and security in Afghanistan, a senior official said Thursday, as the U.S. military hopes to maintain a semblance of control to process more Americans, Afghans and other evacuees onto military transport planes at the Hamid Karzai International Airport.

Meanwhile, more than 200 infantry Marines along with detachments of heavy vehicle crews are embarked on USS Arlington (LPD-24) to support humanitarian aid and disaster relief operations in Haiti after the devastating Aug. 14 magnitude-7.2 earthquake, the service said.

Marines at the Kabul airport are “primarily focused on… the evacuation control center. That is the efforts to process American citizens, [Special Immigrant Visas applicants] and other Afghans and partner-nation citizens for evacuation and ensure that they get on the planes and get out of the country to various locations,” Brig. Gen. Peter Huntley, director of operations at Marine Corps headquarters, told reporters during a media call Thursday afternoon. “We also are participating as part of the perimeter security” at the airport, a mission led by the Army’s 82nd Airborne Division.

As of Thursday, there are U.S. 5,200 troops in Kabul as part of the unnamed non-combatant evacuation operation that was put into effect earlier this week, Pentagon officials said.

The 24th MEU was deployed to the region with the Iwo Jima Amphibious Ready Group and providing emergency support to U.S. Central Command when it got orders to respond if needed for the planned exit of U.S. combat forces from Afghanistan. “When it became known that we were doing a drawdown, they were brought in as a central part of the plan,” he said.

About 50 members of SPMAGTF-CR-CC were the first Marines to arrive in Kabul, bringing an initial headquarters and command-and-control capability to the JTF-CR forces at the Kabul airport. About 1,200 from 1/8 and Combat Logistics Battalion 24 from Camp Lejeune deployed off their Navy ships with the Iwo Jima ARG for Kabul. They were followed by Marines and sailors with 2/1 and elements of Combat Logistics Regiment 1 based at Camp Pendleton, bringing to a total of about 800 Marines from the SPMAGTF ashore in Afghanistan.

Marines arrived in Kabul with “multiple days of supplies on their backs,” including supplies, food, water and ammunition and are “living expeditionary,” Huntley said. “They train to that, so it’s to be expected.”

While most of the 24th MEU’s battalion landing team and combat logistical battalion are ashore, its aviation units “remain on the ships,” he said, including Marine Corps MV-22B Ospreys on standby for any personnel recovery mission, like a downed aircraft. “That’s a be-prepared task,” he said. Marine KC-130J Hercules aircraft assigned as tethered to the MEU also “are supporting them in that.”

One mission the KC-130s aren’t doing, he said, is assisting in picking up Americans or other evacuees in other parts of Afghanistan who cannot reach the Kabul airport.

The KC-130J in the region assigned to SPMAGTF-CR-CC “is assisting with the in-flow and out-flow of military personnel and equipment,” which “leaves for bandwidth for the (Air Force) C-17s to do more evacuation,” Huntley said. The 24th MEU’s detachment of AV-8B Harrier jets jumped into the mix on Tuesday supporting military operations in Afghanistan, he added. 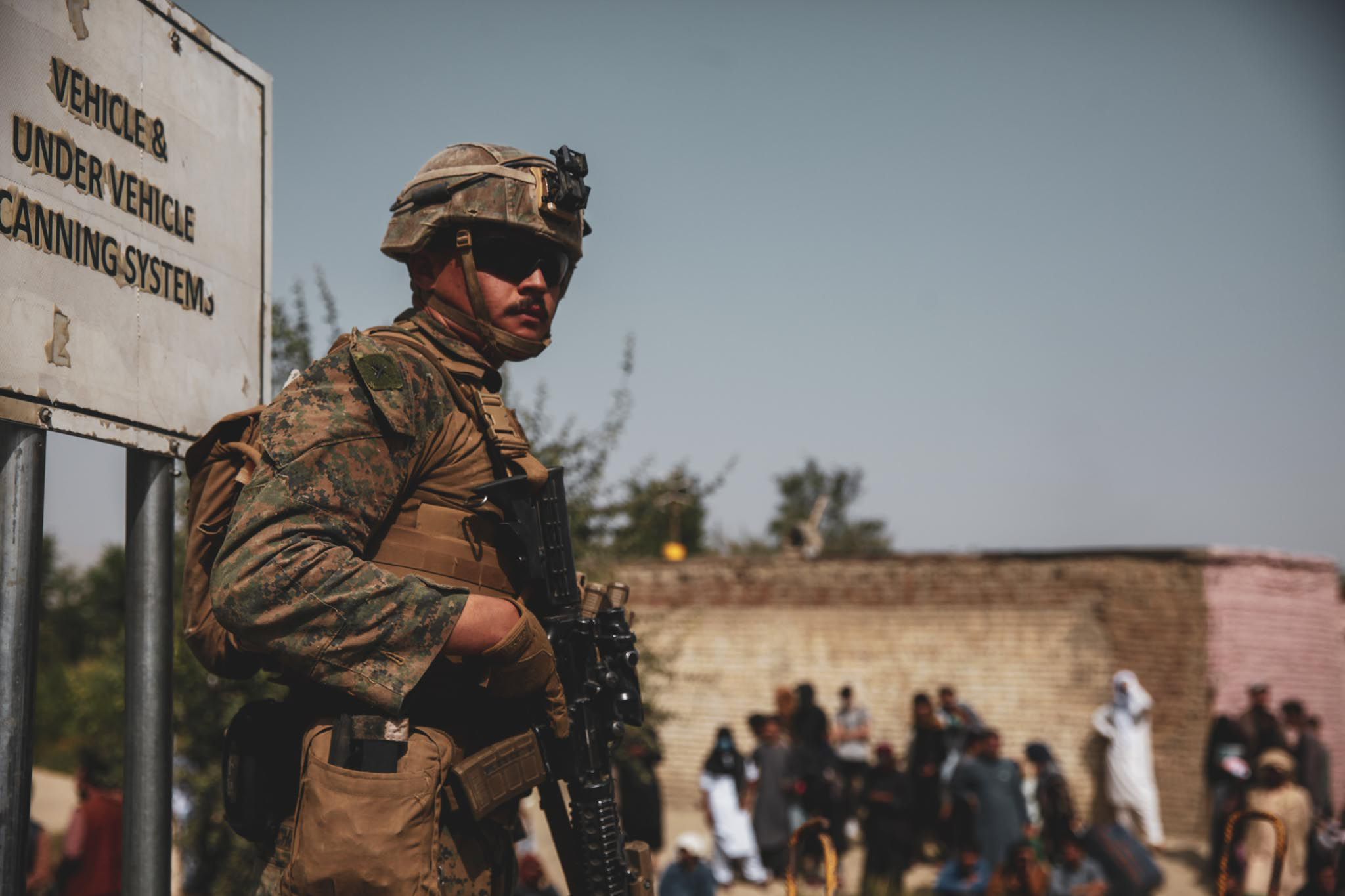 The first groups arrived to a chaotic environment as thousands of Afghans rushed toward the airport after Taliban forces took control over much of the capital city.

There were reports of gunfire in the early days but Huntley said the Marines there didn’t believe it was coordinated by the Taliban. In one exchange of gunfire, a Marine with 1/8 was “grazed” and wounded in the leg, “but it was relatively minor. That Marine was patched up and he returned to duty,” Huntley said.

The Marines’ primary missions at the Kabul airport are the evacuation control centers, or ECCs, where they’re processing individuals out of the country, and the security needed for those sites, Huntley said.

“On the ground, it was very challenging,” said Huntley, an infantry officer whose experience include multiple tours in Afghanistan and in Iraq. “There was a relatively small number of Marines… but they were able to reestablish the perimeter at the airport, and they were able to get the airfield cleared, which enabled that evening for additional forces to flow in” from the SPMAGTF and 82nd Airborne.

And that’s provided a safer environment for the operation of evacuation control centers, or ECCs, that are key to getting Americans, Afghans and others cleared for the outgoing flights at the Kabul airport.

“The through-put at the evacuation control points is more than doubled today than it was yesterday,” Huntley said, noting “there is an increase in the ability to process (evacuees). And I think those numbers are going to go up more.”

The 24th MEU, specifically within its combat logistics battalion, is equipped and prepared to provide Role 2-level, front-line medical, surgical and trauma care, and most of those capabilities are now on the ground in Afghanistan, officials said.

“There is a pretty strong capability… of providing that combat stabilization if a Marine or soldier or anybody else is seriously hurt. But they are helping, they are finding individuals who are coming through who need some form of medical help, and they’re aiding in that,” Huntley said. “The Marine elements that are on the ground have brought ashore their organic medical capabilities, which are pretty significant actually and of course they are expeditionary in nature so they’re living just like the Marines are.” 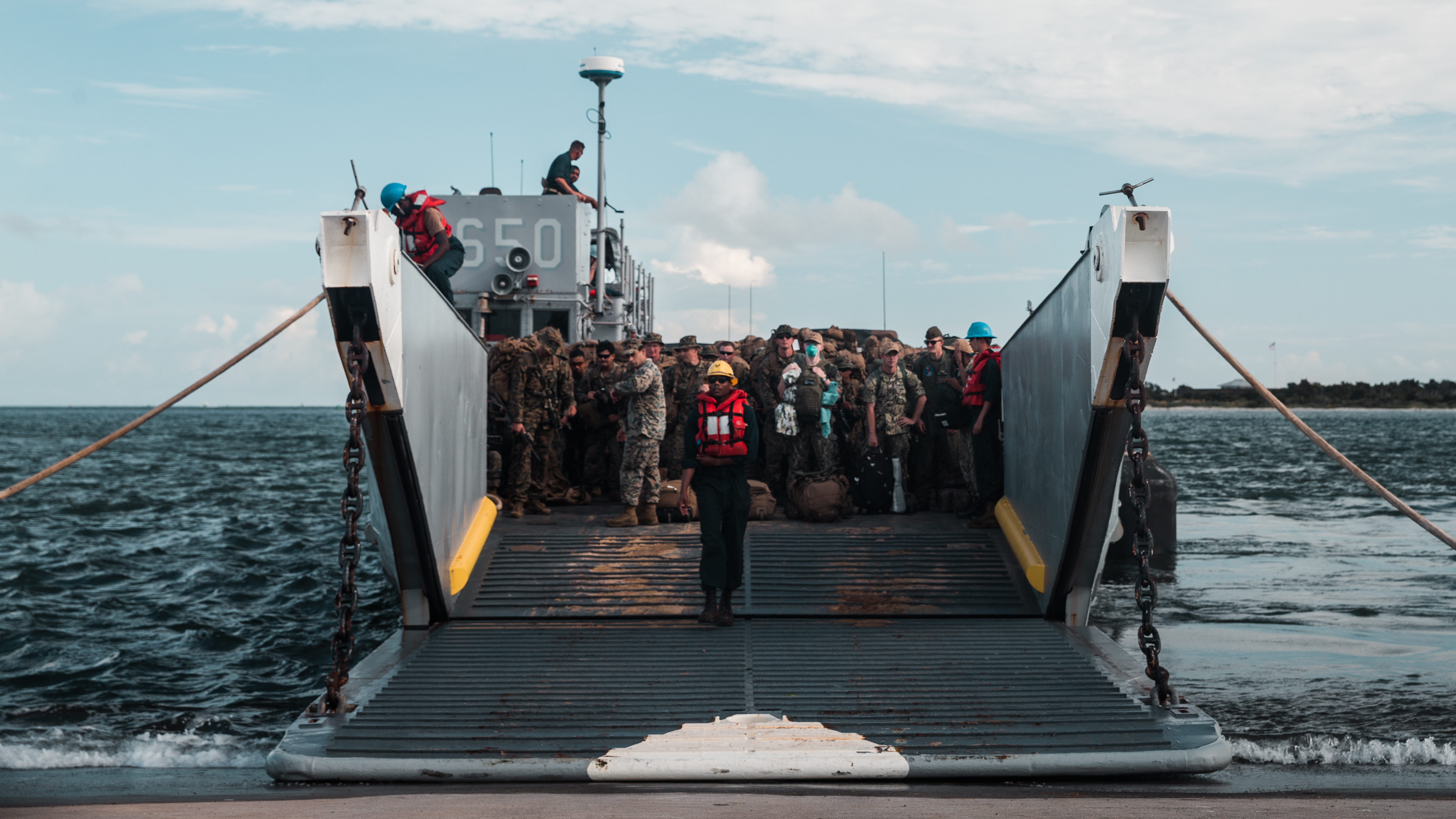 The earthquake struck Haiti as the Caribbean island-nation is grappling with the COVID-19 pandemic. The U.S. Centers for Disease Control and Prevention has issued a travel notice of “high” level of COVID-19 in the country. Haiti has reported 576 deaths and 20,556 infections, according to Johns Hopkins University of Medicine data.

“The vaccination rates for the forces embarked are really high, they’re in the 90-percent,” Huntley said, adding the Navy’s rates on Arlington are almost 100 percent.

Marines in Haiti will “assist in the humanitarian aid and disaster relief. Exactly what is needed, we’re waiting for the assessments” on the ground to help determine what’s needed to help, Huntley said.

The mission there “is a USAID-led effort,” he said, referring to the U.S. Agency for International Development, which the Miami, Fla.-based U.S. Southern Command is supporting with U.S. forces.

A reinforced rifle company with 1st Battalion, 6th Marine Regiment, from Camp Lejeune and “enablers” including engineering and transportation units, embarked on amphibious transport dock USS Arlington (LPD-24) for Haiti, he said. “It’s going to be slightly more than 200” Marines.

An MV-22B Osprey squadron is on 96-hour “standby” orders to being deployed, he added. “As assessments start coming in in what’s needed by the Haitian people by the United States, then we’ll go forward from there.” 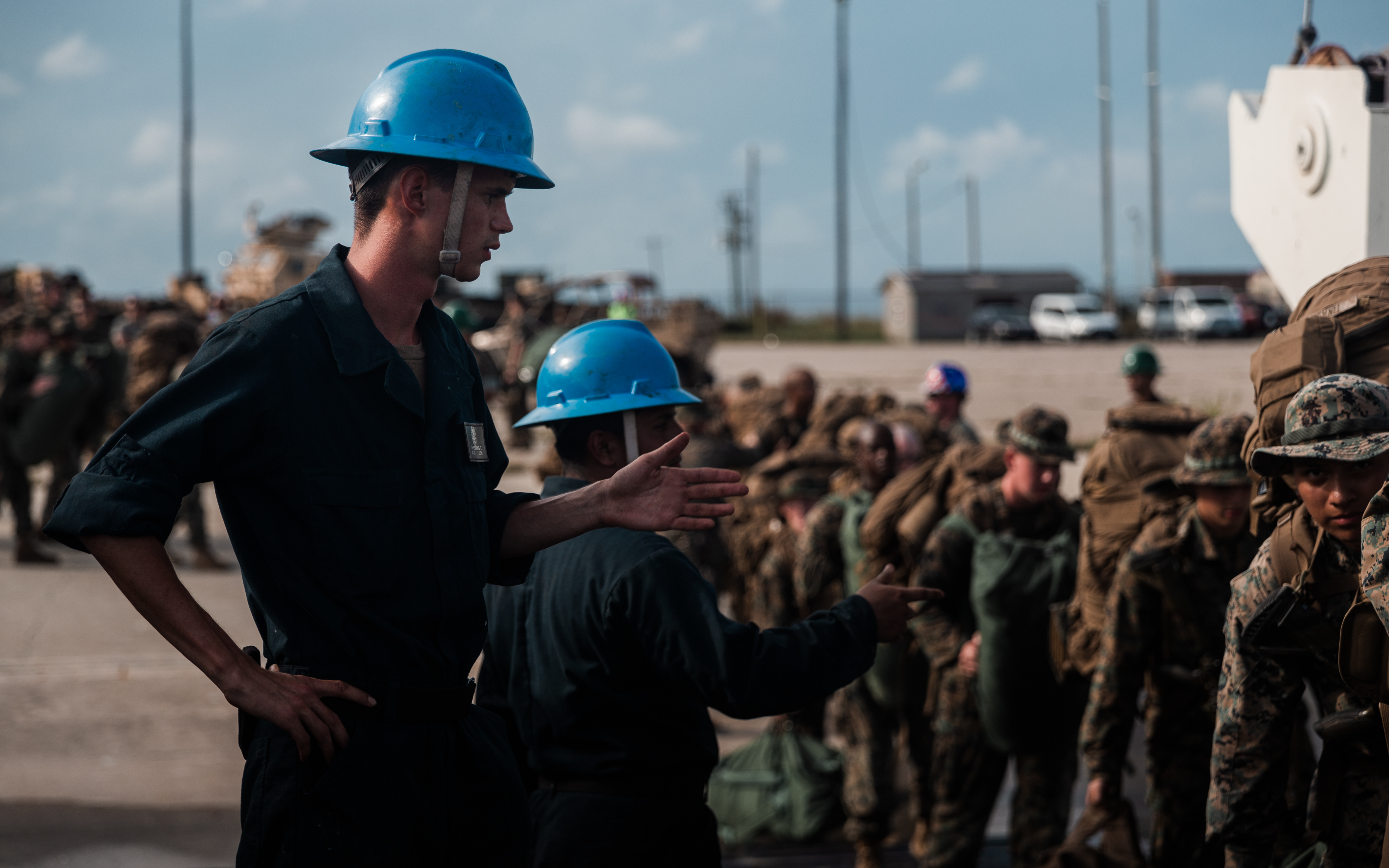 “Whatever the mission is,” Huntley said, “it’s going to be heavy on the disaster-relief part. That’s really what the need is right now.”

Also on a 96-hour “tether” for the mission in Haiti are additional heavy-lift transport aircraft and a combat logistics battalion, Huntley said, “which has significant capabilities – everything from water purification to heavy engineering capabilities and a variety of supply and maintenance… that would be needed in a situation like that.”

Marine Corps units typically train for humanitarian aid and disaster-relief type missions before they deploy or if they’re placed in a short-notice for possible deployment, officials noted. “The Marines are both individually and collectively trained for these types of scenarios,” Huntley said.

East Coast units, in particular, have supported disaster-relief missions often after hurricanes and serious storms. “So this is well built into our training programs and our equipping,” he added, “and it’s something the Marine Corps is always ready for, particularly at this time of the year.”

A decade ago, it was the 24th MEU and the Nassau ARG that deployed to Haiti to assist in the disaster relief and humanitarian aid mission, called Operation Unified Response, after a magnitude-7.0 earthquake struck Haiti on Jan. 12, 2010.