A memorial to the 84 officers and crew of the last U.S. Navy ship lost in World War II, USS Bullhead (SS-332), was recently unveiled in Fremantle, Western Australia, a vital homeport to American, British and Dutch submarines in the Pacific theater.

The memorial, located outside the Western Australian Maritime Museum, was dedicated Aug. 6., the 76th anniversary of the submarine’s sinking by Japanese aircraft in the Java Sea, off the coast of Bali near the mouth of the Lombok Strait.

American consul-general David Gainer said at the dedication ceremony that the memorial underscored the United States’ unwavering commitment to Australia. “Lives aboard USS Bullhead were lost defending Australia. This memorial is a powerful symbol of their courage and the unbreakable alliance between our two countries.”

The submarine left Fremantle on July 31, 1945, on its third patrol after a brief re-fitting and the replacement of its five-inch gun, according to Naval History and Heritage Command.

The man behind the memorial to Bullhead, which received two battle stars during the war, is Tim Baldock, author of Fortress Fremantle: Its Lost Sub & Contributions to World War II.

In an email interview, Baldock said, “I felt very strongly connected to the boat, and the men on board so [I] wanted the memorial to be a lasting legacy to them from my family, and a contribution to the City of Fremantle and the State of Western Australia.”

The twin significance of the submarine’s sinking and the nuclear bombing of Hiroshima occurring on the same day “inspired me to write the book about Fremantle and dedicate it to the memory of Bullhead.”

Leading up to the book’s launch in 2018 after three years of research and writing, he decided any profits from it would go to the Fremantle Foundation, a local philanthropy. He had already decided to dedicate the book to the crew’s memory. ‘‘When I spoke at the book launch I proposed my idea of a memorial one day to the Bullhead as well. My profits have gone to the Fremantle Foundation, my family paid for the memorial ourselves which I was determined to see through” after the book’s release.

After publication, he wrote State Premier Mark McGowan, who is a former Australian naval officer and strong supporter of the effort. McGowan put Baldock in contact with the museum.

During this time, Baldock also contacted the American consulate about his plans for a memorial. “They were supportive of the project from the beginning and offered whatever support I needed,” he said.

There were already two memorials to submarine service at the museum’s entrance – one to the Submarine Service of Australia and the other a listing of all the submarines that served in Fremantle during the Pacific War. 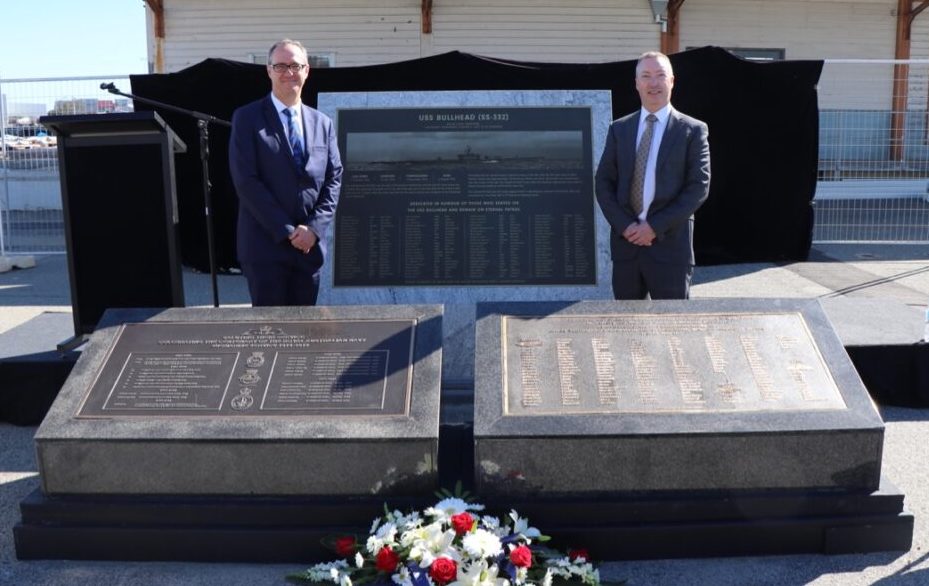 The Bullhead memorial sits behind the others and is higher so all three can be read by a person standing in front of them. Baldock designed the memorial himself, with help on the wording from Peter O’Donoghue, president of the Submarines Association of Australia Western Australia Branch.

Baldock said as a boy he and his father used to watch old war movies. It was then that he began a lifelong interest in building model battleships. Those activities fueled his interest in military history, particularly World War II. But it was his time as a tour guide at the Oliver Hill Gun Battery on Rottnest Island – off the coast of Perth, Australia – much later that he “learned about the significance if the Fremantle submarine base and the contribution to the outcome of the Second World War.”

Fremantle was second only to Pearl Harbor as an allied submarine base during World War II.

“I would like ultimately for this to lead to something far more significant at Fremantle, such as an Interpretive Centre to educate about the significance of the place, the submarine service it supported during WW II, and the impact of these submarines on the outcome of the Pacific War,” Baldock said.

According to the Naval History and Heritage Command, Bullhead was laid down on Oct. 21, 1943, at Groton, Conn., by the Electric Boat Co.; launched July 16, 1944; and commissioned on Dec. 4, 1944. Cmdr. Walter T. Griffith was in command from its commissioning to loss.

Baldock said a “bucket list” goal is to visit the USS Bullhead Memorial Park in Albuquerque, N.M., dedicated in 2010.

Baldock’s son, Max, is a midshipman maritime warfare officer in the Royal Australian Navy, studying in Canberra. “His goal is to one day command his own frigate or destroyer (or dare I say submarine).”