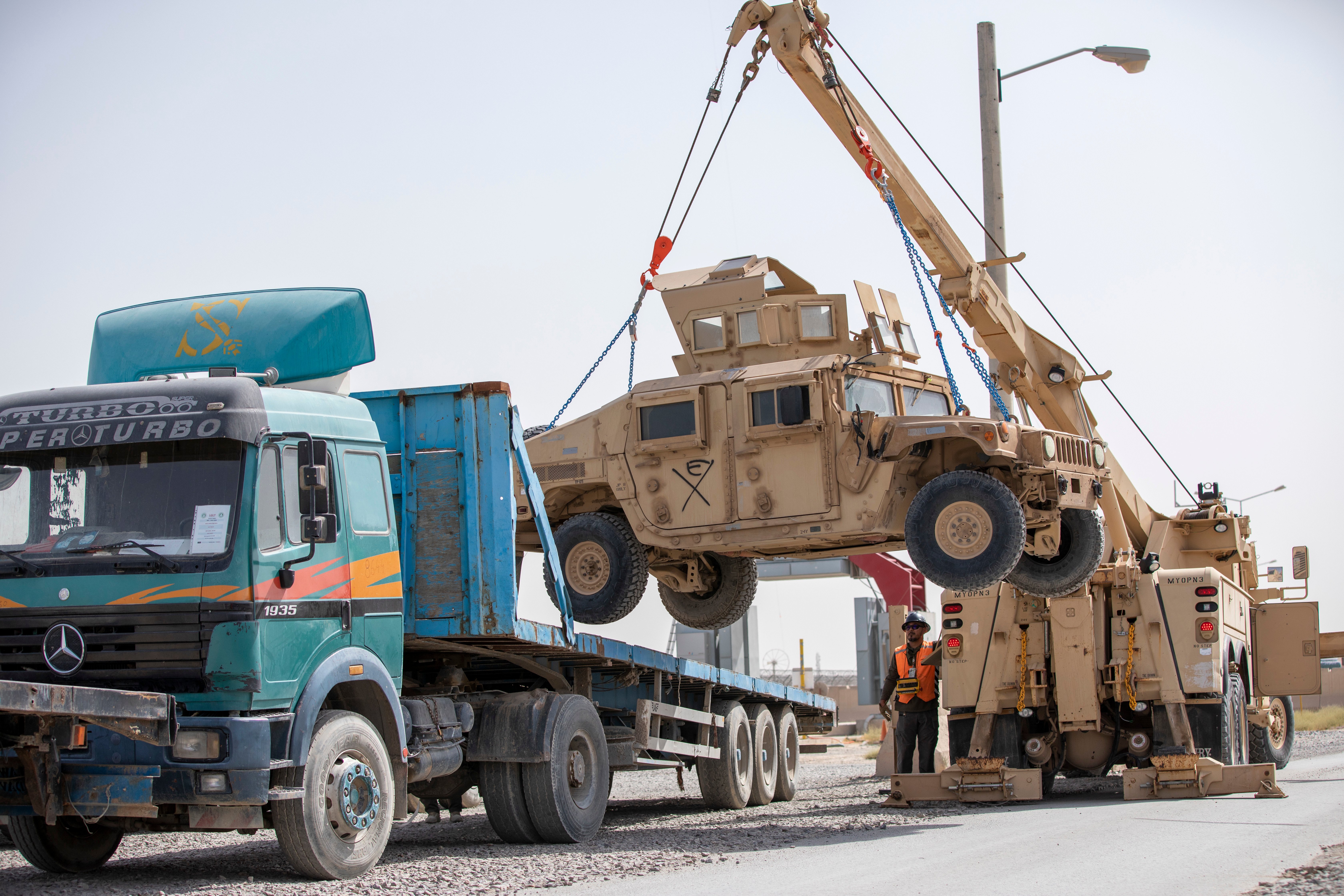 U.S. Soldiers and contractors load High Mobility Multi-purposed Wheeled Vehicles, HUMVs, to be sent for transport in support of the Resolute Support retrograde mission in Afghanistan on July 13, 2020. US Army Photo

American expectations of what could be achieved in Afghanistan – establishing a democracy by defeating al Qaeda and the Taliban – were too high, and initially too narrowly focused on revenge and justice following the Sept. 11, 2001 terrorist attacks, two national security experts said Thursday.

Over time, the strategy of high ideals to provide governance across the country, broaden educational opportunities for all children, protect women’s rights and build needed infrastructure has shifted “to a policy of negotiations … to get out,” Carter Malkasian, former special assistant to Marine Corps Gen. Joseph Dunford when he was chairman of the Joint Chiefs of Staff, said at the Center for Strategic and International Studies.

President Joe Biden, also speaking on Thursday, said America achieved its objectives in Afghanistan — killing Osama bin Laden and preventing the country from becoming a safe haven for terrorists. The withdrawal is “quite frankly overdue,” he said.

The American withdrawal is now 90 percent complete, according to the Pentagon. About 650 U.S. forces are expected to remain in the country to protect the American embassy, and for the time being Kabul’s airport, when the pullout is complete in late August.

With Taliban military pressure increasing on provincial capitals and cities, the ability of the Afghan government under President Ashraf Ghani to stand on its own “doesn’t look good,” as American and NATO forces withdraw, Malkasian said.

“The Taliban look a lot more coherent than the government.” But trying to decipher the Taliban’s immediate intentions is “like trying to read tea leaves,” he added.

Gina Bennett, senior counterterrorism advisor at the National Counterterrorism Center, said at CSIS that the Taliban present themselves to the Afghan people as bringing authentic governance. That was the posture they adopted in the late 1990s and into the early 2000s to gain acceptance in much of the country. “I don’t think it’s going to change,” she said.

If the U.S. goal was to prevent Afghanistan from becoming a terrorist haven, she said the time to have talked to the Taliban about severing links with al Qaeda passed in 1996. “By 2001, it was too late to have those conversations,” she said.

As for the terrorism threat now, “al Qaeda and ISIS have every reason to continue to plot from Afghanistan” over the next two to three years. Bennett noted “terrorism remains just a very easy tactic” to frighten a populace; and is used by groups across the globe by saying they are affiliated with al Qaeda or ISIS, although their ideologies do not exactly mesh.

Bennett said it was important not to change normal behavior in nations like the United States because there is a terrorist threat.

She did not predict a new terrorist attack on the American homeland from overseas, but said Afghanistan could become another safe haven, like the Bekaa Valley in Lebanon during the 1970s. The rich farming region was a place where terrorists were “going, hiding, training … networking [and then] going back to wherever they’re going to fight.”

She expected “the same tensions to play out [in Afghanistan between different ethnic groups, the government and the Taliban] that we saw in the 1990s,” which led to prolonged civil war after the Soviets withdrew.

The Taliban took control of much of the country by 2001, although there were pockets of resistance, especially in the north. Malkasian said that scenario could repeat itself in the near future.

Peace talks between the government and Taliban in Doha, Qatar, “are pretty stalled now,’ said Malkasian.

Bennett, speaking for herself and not the center, said that often the United States has “a strategy of what we’re against” rather than what it’s for – such as governance that people consent to. The 9/11 attacks were so shocking to the American people, “having survived Mutual Assured Destruction” of a nuclear war with the Soviet Union, “we were out for justice and revenge.”

“Did we punish? Did we get revenge? Yes,” Bennett said. But by portraying terrorists as “enemies of the American military,” the United States raised their stature. The United States also did not actively work with Islamic nations that were repulsed by these terrorists acting in the name of their religion.

Malkasian, author of the new book “The American War in Afghanistan, A History,” said one possible outcome in Afghanistan could see powers such as Russia and Pakistan become more involved in seeking regional stability by no longer “helping the Taliban” and providing aid to the government and militias.