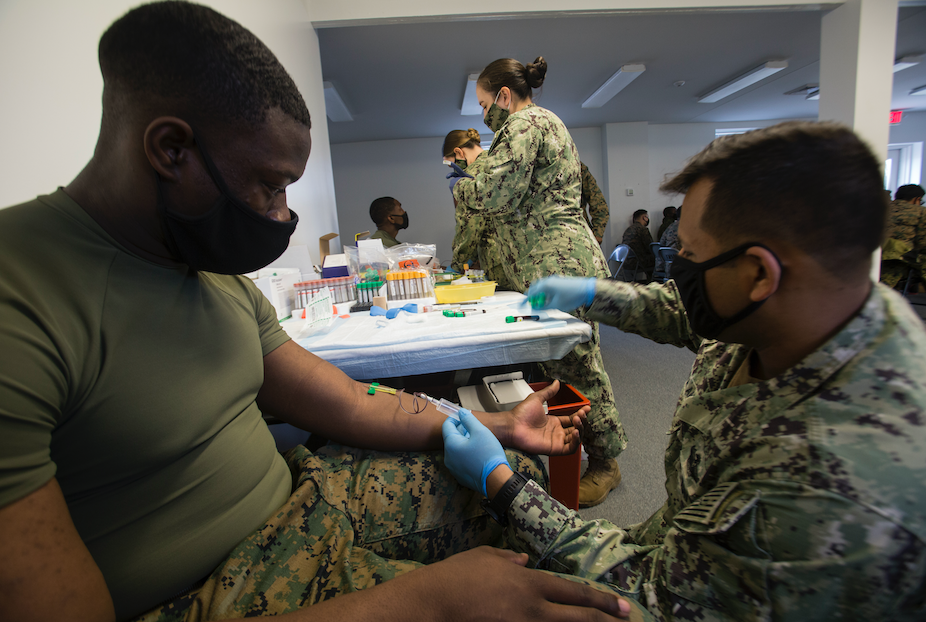 A new study of young Marines who tested positive for SARS-CoV-2 hopes to show how exposure to the coronavirus might protect against future infections and identify chronic health issues tied to COVID-19.

A research team from Naval Medical Research Center will travel to South Carolina next week to revisit Marines who last year enrolled in a study at Parris Island Marine Corps Recruit Depot and are now assigned to units there or nearby Beaufort Marine Corps Air Station. The team last week met with scores of Marines at Camp Pendleton, Calif., and is collecting samples and health and medical data from the nearly 2,900 Marines who participated in the “COVID-19 Health Action Response for Marines” study.

The longitudinal prospective study is looking at the risks of infection after development of antibodies, created either from exposure to the coronavirus or after vaccination, among young, healthy people. The initial study began in May 2020, after the Marine Corps asked the Silver Spring, Md.-based Naval Medical Research Center to help find ways to sustain recruit training amid the pandemic.

The CHARM study of nearly 3,100 recruits found that those who tested positive for the virus could still be reinfected later, and at a lower rate than someone who’d never been exposed to the virus.

Nearly one-third of the recruits were infected with the coronavirus and, of those, two-thirds were asymptomatic carriers and “didn’t even realize they had the infection until we told them,” said Cmdr. Andrew Letizia, an infectious disease physician and principal researcher leading the team. Since most showed no symptoms of disease, “you could get reinfected and unknowingly spread it to other people.”

The research team is revisiting participants and hopes to get as many to voluntarily re-enroll for the new study, dubbed CHARM 2.0, that “aims to understand how protective, detectable antibodies from those previously infected with COVID-19 are able to prevent subsequent infection,” said Regena Kowitz, a Naval Medical Forces Pacific spokeswoman. 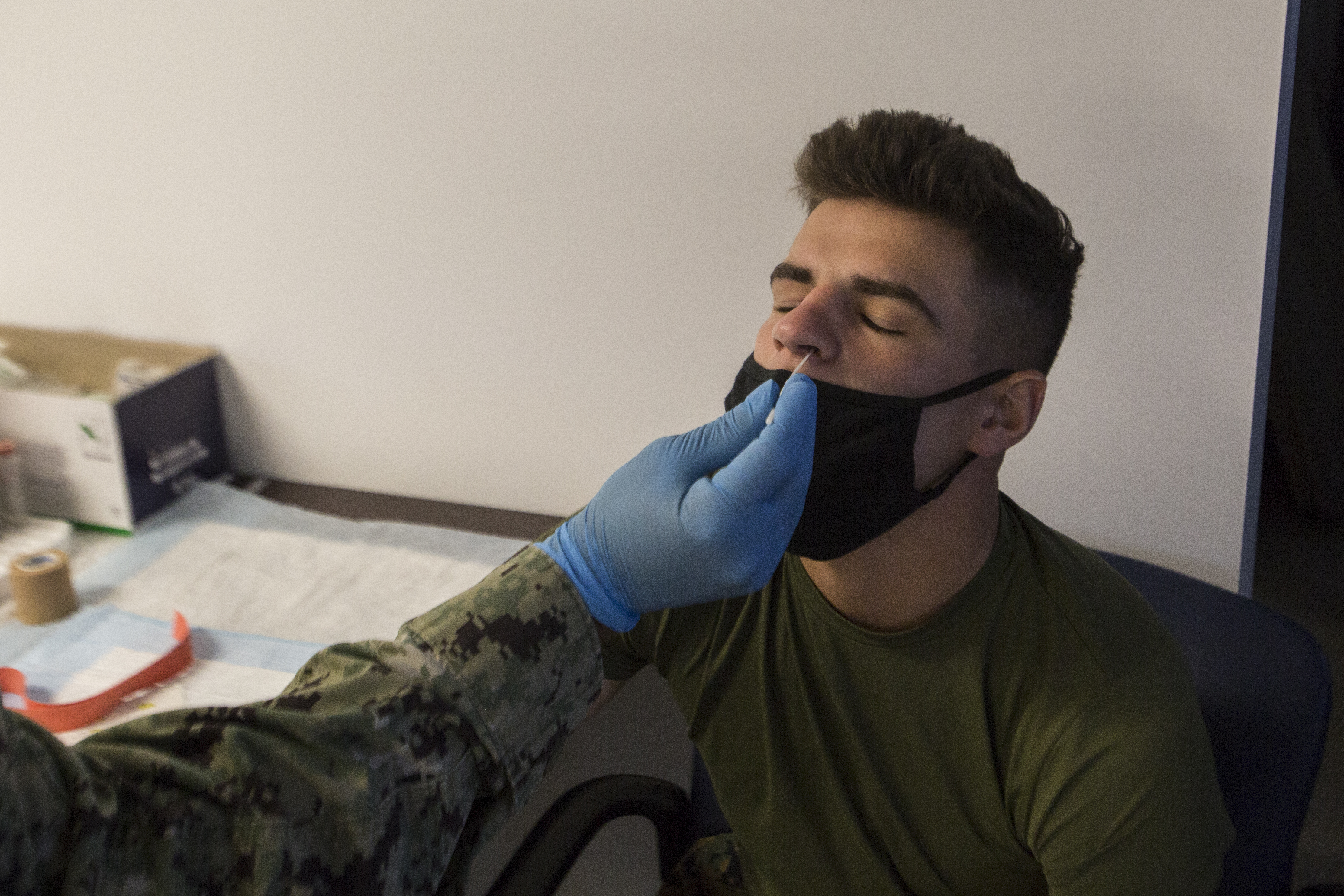 A U.S. Navy hospital corpsman with the Naval Medical Research Center, uses a nasal test swab on a Marine participant with the COVID-19 Health Action Response for Marines (CHARM) study on Camp Johnson, N.C., on Mar. 3, 2021. US Marines Corps Photo

CHARM 2.0 has two main goals: Assess the duration and ability of someone’s immune system to fight off variants of concern, and determine the extent of long-term, chronic symptoms known as “long COVID” in the young-adult population.

Such findings could help military and public health officials understand the risks of subsequent reinfections and the extent of protection against disease spread by those who were vaccinated or had protective antibodies remaining after infection. There’s increasing concern the virus and its emerging variants are putting younger and otherwise healthy adults – the military’s main demographic – at higher risk of new infections and long-term health problems that could threaten unit effectiveness and combat readiness.

“What we’re trying to assess is how effective the immune response is against those variants… to understand wherever these Marines are deploying to – especially in larger groups – to determine if they are safe to deploy,” Letizia told USNI News last week from Camp Pendleton. “We are in the process of still gathering this data.”

Little was known about SARS-CoV-2 when it surfaced in the U.S. early last year, causing COVID-19 disease. “What we did know was that it certainly affected different people of different ages differently,” Letizia said. The virus, at the time, led to higher hospitalization and death rates for older people than young, healthy adults. The rates have dropped amid the growing availability of vaccines.

The rate of reinfection seen among recruits might be greatly reduced with vaccinations, the NMRC research team found, but more data is needed.

“Herd immunity is difficult to predict if the infection risk after natural and vaccine-induced immunity is unknown,” the DoD-funded team wrote April 15 in the journal Lancet Respiratory Medicine. While vaccines don’t provide absolute immunity, “it is possible that both previously infected and vaccinated individuals might later become infected. It is not known whether either can contribute to transmission events… Some reinfected individuals could have a similar capacity to transmit infection as those who are infected for the first time. The rate at which reinfection occurs after vaccines and natural immunity is important for estimating the proportion of the population that needs to be vaccinated to suppress the pandemic.”

“COVID-19 vaccination might be necessary for control of the pandemic in previously infected young adults,” they concluded.

The Marines, most ages 18 to 22, provide a sizable population for study at a time when universities and colleges sent students home to finish the remaining semester, eliminating a potential cohort for research into how the virus was affecting healthy, young adults. If the military “were to better understand the effects of SARS-CoV-2 in a young, all-active-duty (force) and most of whom are a healthy population, they need to create their own study to figure out what the heck is going on,” Letizia said.

When infected with a virus, the body produces white blood cells called B-cells and T-cells that “are like the soldiers of your body” and can help fight off diseases and cancer, Letizia said. “If you made antibodies, are you still making antibodies? Can your body remember if it were to see that infection again and successfully identify and fight it off?”

Letizia and the research team, which includes hospital corpsmen, are taking blood samples from the Marines and, using specialized equipment, can quickly isolate and freeze the cells to later thaw them for testing in the laboratory. They hope to learn whether antibodies “can identify and neutralize (or) fend off these variants, even when they haven’t even been exposed to them,” he said, referring to several variants of the virus circulating globally. 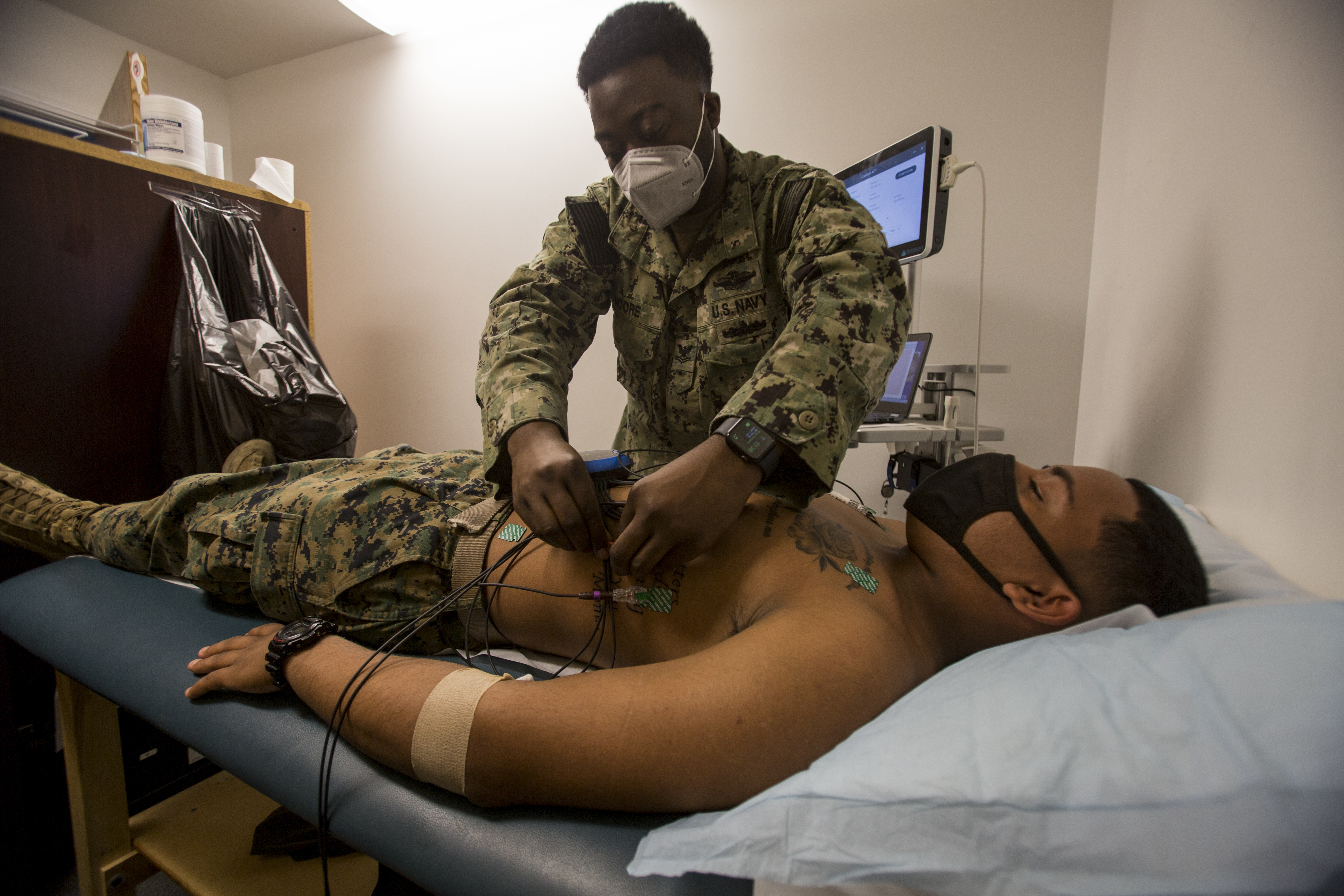 Researchers also hope to learn more about how long antibodies protect against any subsequent exposure. That will important to determine the need for booster shots or other measures to reduce any new spread, a concern particularly with the close quarters of recruit training, tight confines of ships and other training of military units.

By continuing to track the Marines for the next six months, researchers hope to learn more about chronic COVID symptoms developed after a SARS-CoV-2 infection. These cover a wide range of problems, from loss of taste or smell to fatigue and chest pain, according to the Centers for Disease Control and Prevention. “We know that about 10 to 15 percent of Americans who have been hospitalized develop some type of long-term condition,” Letizia said. “What we don’t know is what is that percentage among otherwise young, healthy Americans, none of whom in our cohort were hospitalized, so the outcomes were very good.”

But among the Marines in the study who were infected but had no symptoms, “are those rates the same? Are they different? And does this need to be a matter of concern for the DoD moving forward?” he said. “That’s really what we’re trying to investigate.”

So along with getting questionnaires and obtaining blood and saliva samples from the Marines, the research team is performing an EKG, or electrocardiography, to see “the rate and rhythm of the individuals’ hearts (and) echocardiography, which is an ultrasound of an individual’s heart, looking at the structure and the movement of the heart muscle,” Letizia said. They are doing breathing tests to assess lung capacity and determine if there’s any scarring or blockages in the lungs and are doing neurologic assessments, including testing a Marine’s grip strength and sensation.

Some in the initial cohort reported loss of taste or other sensations “a few weeks after” infection, he noted. The follow-up study will see if those residual problems went away or remain “or maybe they’ve developed something new, a few weeks later since we last saw them.”

While young, healthy Marines had fared well during the pandemic, Letizia said, “the question for us is, if you’re living in a multi-generational family – especially with someone who is more vulnerable to infection – and you had been previously infected, it still means you could become reinfected, bring it home and then infect the loved one who is certainly more vulnerable.

“So putting this altogether really makes a strong argument for the need to get vaccinated, even if you have experienced actual infection previously. I think this is very strong data – at least for young, healthy Marines, at least – of why you should still get vaccinated.”