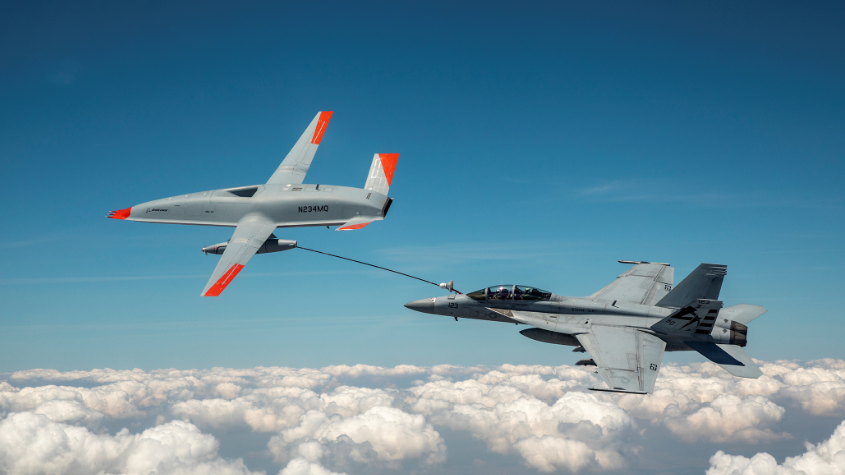 MQ-25 T1 test asset refuels a Navy F/A-18 during a flight on June 4, 2021 at MidAmerica Airport in Illinois. This flight demonstrated that the MQ-25 Stingray can fulfill its tanker mission using the Navy’s standard probe-and-drogue aerial refueling method. Boeing Photo

This post has been updated with additional comments from Boeing and the Navy.

The Boeing-built T1 prototype for the Navy’s MQ-25A Stingray unmanned aerial vehicle was operating from the MidAmerica Airport in Mascoutah, Ill., just outside of St. Louis.

“During the flight, the receiver Navy F/A-18 [Super] Hornet approached the Boeing-owned MQ-25 T1 test asset, conducted a formation evaluation, wake survey, drogue tracking and then plugged with the unmanned aircraft. T1 then successfully transferred fuel from its Aerial Refueling Store (ARS) to the F/A-18,” NAVAIR said in a statement.
“The milestone comes after 25 T1 flights, testing both aircraft and ARS aerodynamics across the flight envelope, as well as extensive simulations of aerial refueling using MQ-25 digital models. MQ-25 T1 will continue flight testing prior to being shipped to Norfolk, Virginia, for deck handling trials aboard a U.S. Navy carrier later this year.”

The T1 took off from the airfield mid-afternoon on Friday and was followed closely by a Super Hornet assigned to the “Salty Dogs” of Air Test and Evaluation Squadron (VX) 23, Boeing and Navy officials told reporters on Monday.

The more than four-hour flight tested a variety of different approaches to the unmanned aircraft that was operated from a Boeing ground control station in radio contact with the Super Hornet.

After several dry connections between the fighter and the drone, the T1 transferred a total of 325 pounds of fuel to the Super Hornet, Dave Bujold, Boeing’s MQ-25 program director said.

The flight comes after the Navy made its first test flight with the test stores in December. The T1 was originally built in 2014 by Boeing as the company’s bid for the canceled Unmanned Carrier Launched Airborne Surveillance and Strike (UCLASS) program. 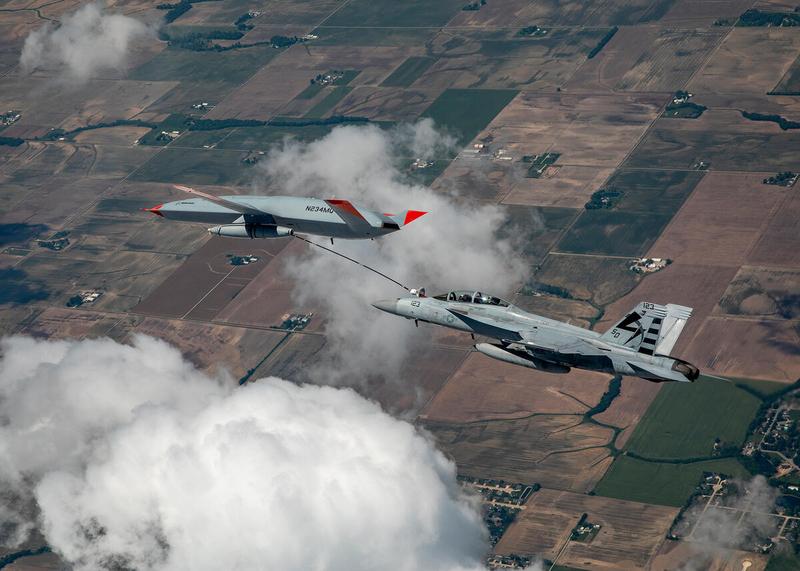 The T1 prototype allowed Boeing and the Navy to get a head start on testing refueling concepts before the first engineering and manufacturing development versions of the MQ-25A enter the fleet.

The future EDM models will move beyond the capabilities of the prototype to make the aircraft suitable to take to sea.

“People always ask us why don’t you just make more T1s and get on with the show,” Bujold said.
“It’s exactly this area we’re spending the time and energy necessary to put in the corrosion control and all the details necessary to be carrier suitable.”

The Navy and Boeing will use the prototype for a range of tests before the first flying EDM aircraft comes online next year.

“T1 again has been a tremendous asset for the U.S. Navy and for Boeing for us to learn early, but we don’t have plans to continue [with] it as we move into the next phase of testing with the EDM – the engineering development models – as we move forward with the Navy test aircraft,” Navy unmanned carrier aviation program manager Capt. Chad Reed told USNI News during the call.
“We will take T1 aboard the flight deck of a carrier in port and test out another vital part of our program. That’s the deck control device.”

Later this year, T1 will be taken aboard an in-port carrier in Norfolk to test the control scheme for basic deck handling for aircraft.

The Navy will also continue to refine the ground control station for MQ-25A. The service has shelved the station it’s developed in favor of a Lockheed Martin control station that could control more systems than just Stingray.

“The Navy still has the vision of moving towards common control standards and systems. This ground control station does provide us the flexibility to, in theory, control other assets in the future. It won’t be able to do it on day one, but we at least have an architecture now that supports that future growth,” Reed told USNI News.

The Navy plans to declare an initial operating capability (IOC) for MQ-25A by 2025.