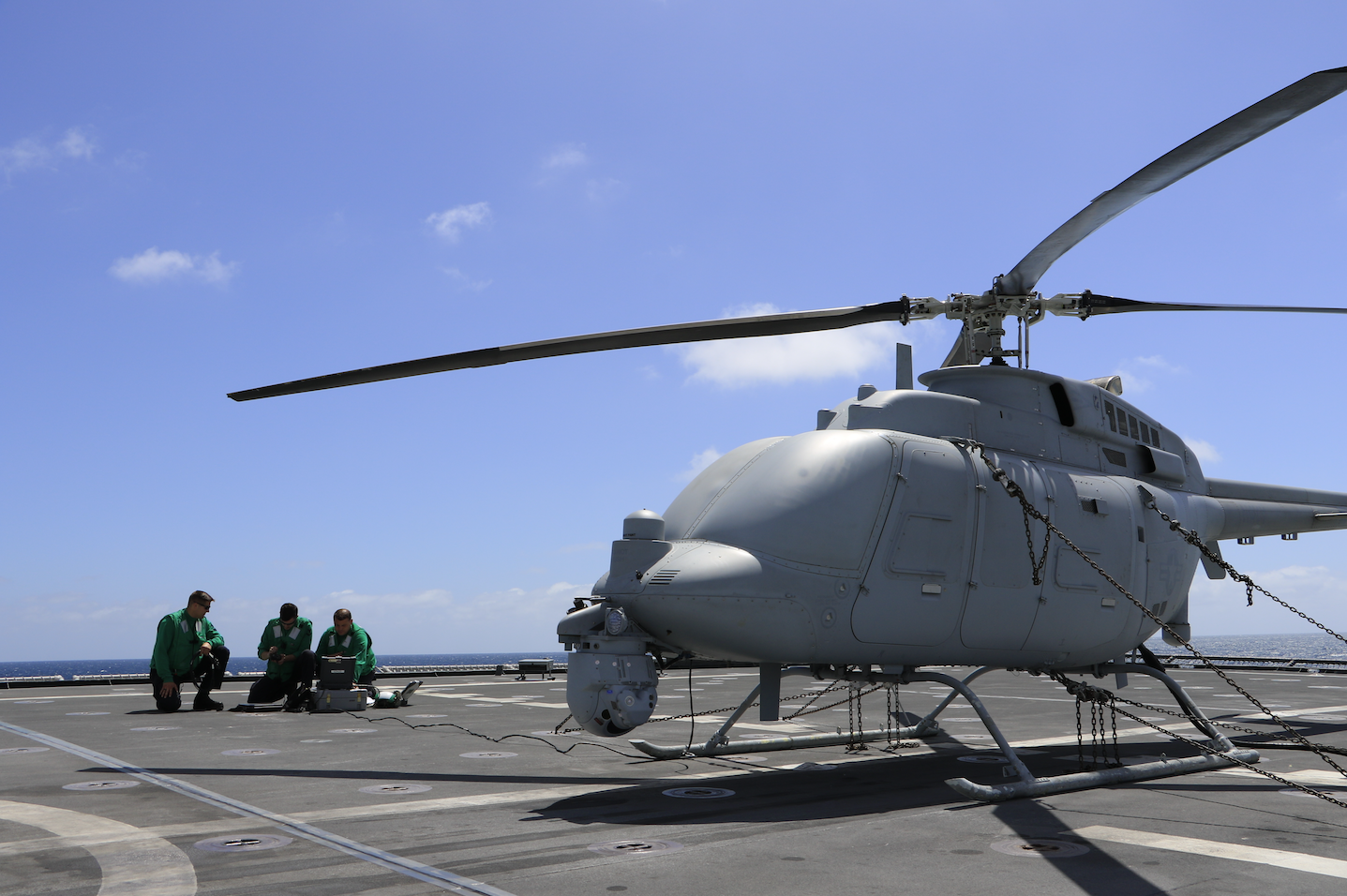 Maintainers from Air Test and Evaluation Squadron 1 (VX-1) analyze diagnostics from the MQ-8C Fire Scout on the flight deck of the Independence-variant littoral combat ship USS Coronado (LCS 4) on June 21, 2018. US Navy photo

Northrop Grumman is testing a portable expeditionary control station that could help sailors and Marines operate the Navy’s unmanned helicopter from both at sea and ashore.

“We also have a control station that we’ve developed that is an expeditionary control station, which allows it to be packed up and offboarded to other ships or it could be taken ashore – to an island, if you will, and allow you to operate Fire Scout not just from one ship. You can move it to wherever you want,” he added. “So it really flows into their distributed maritime ops and that expeditionary-type mission sets. And we are currently flying that – flying with that control station out at a test site now and are maturing it so that it’s ready for operations in the coming years.”

This type of mobile control station would enable sailors and Marines to easily break down the system and take it with them should they need to.

“It takes all of the functionality of the current Fire Scout control system – which is typically in a CONEX box or it’s hard-mounted in the ship – and it repackages it into small, portable cases, hardened cases, that can be rapidly torn down and set up really at various locations,” Eischeid said.

Northrop recently confirmed that the MQ-8C could fit aboard amphibious transport dock USS Anchorage (LPD-23). During the fit, checked to see what sort of communications equipment it would need to use the MCS-X with the amphibious ship.

“When we met with the ship, it was clear that they desired some organic [intelligence, surveillance and reconnaissance] capabilities, which we have right now. We can give them that today. So that certainly would be a big help for that class. But as they attain weapons and surface missiles . . . Fire Scout can also play a key role in those targeting missions,” Eischeid told USNI News, referring to the LPDs.

Officials have discussed the potential to put missile launchers on the LPDs, which were not constructed with Vertical Launch System cells. Placing the Naval Strike Missile on the LPDs has been floated as an option, but former expeditionary warfare director on the chief of naval operations’ staff (OPNAV N95) Maj. Gen. Tracy King earlier this year suggested this may be difficult to pursue because the Navy is putting NSMs on the Littoral Combat Ships.

The mobility of the control station could also align with the Marine Corps’ vision for Expeditionary Advanced Base Operations (EABO), which would see Marines moving around between islands in the Pacific to support the naval fleet.

“It depends on the requirements. We’d have to work with the Marines on what their specific requirements are, but I would say we’re – the fact that we’re already flying with it, we would just need to tailor any of their particular requirements. I would say we’re in the latter stages of being able to provide the full capability,” Eischeid said when asked for a potential timeline to deliver this capability to the Marine Corps should the service want it.

The MQ-8C is larger than its predecessor, the MQ-8B, which operates from the Navy’s Littoral Combat Ships and has been used on both frigates and destroyers. Eischeid said the C variant has nearly triple the payload capacity compared to the B and also has a higher level of endurance.

“It has newer components and the design has some higher reliability, so from that standpoint, it provides those as additional benefits. Because we are now integrating a newer radar system onto it relative to the B – so it’s going to have a better, higher-performing radar system that’ll be deployed with it here shortly,” he said. “It also leverages a system called Minotaur, which is being utilized by a number of Navy platforms for command and control of different sensors. So those are the current kind of advantages, but certainly, we’ve got a number of other payloads and new capabilities in the pipeline that we’re actively working on that will bring it even more capability.” 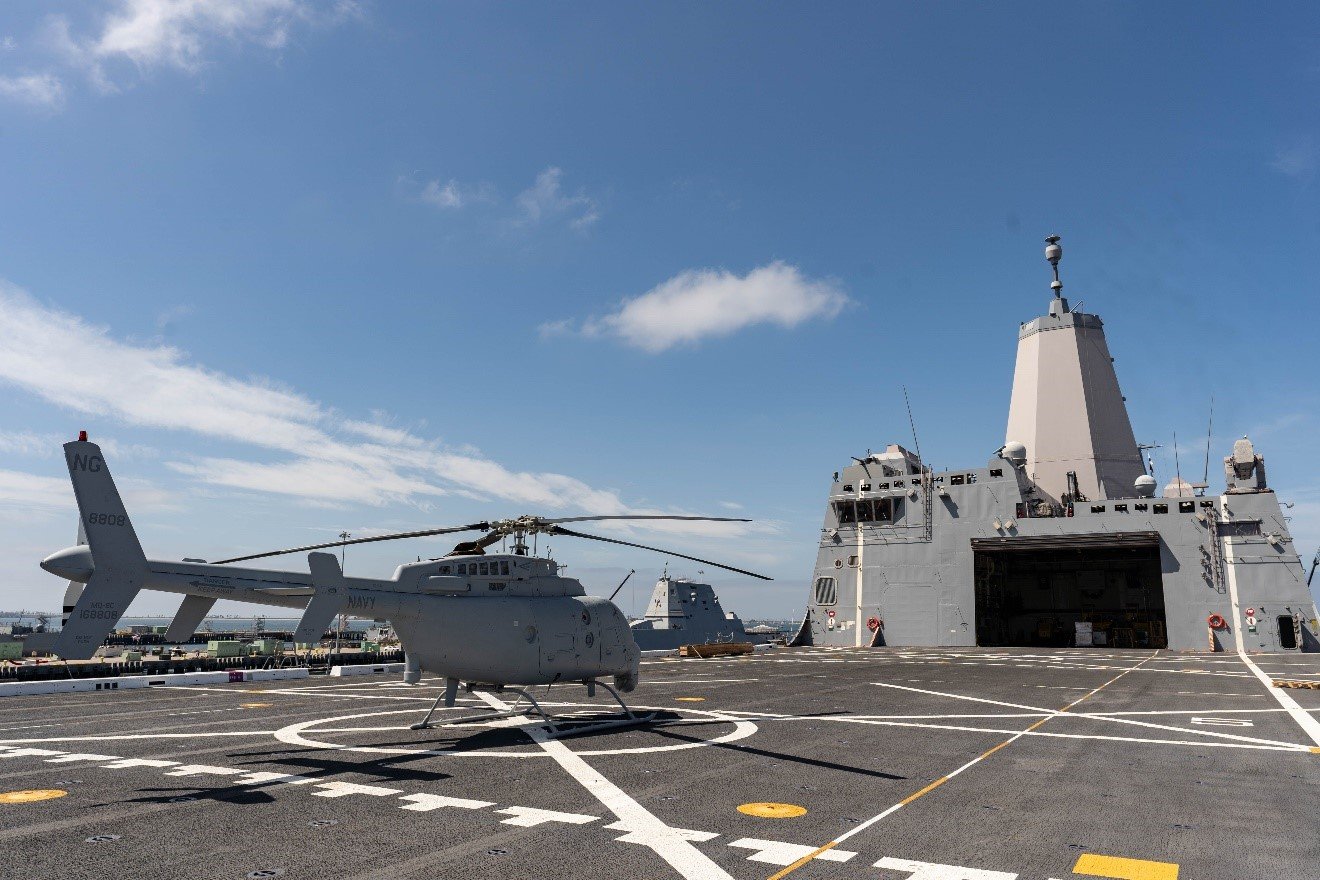 An MQ-8C Fire Scout passes the initial fit check aboard the USS Anchorage (LPD-23) at Naval Base San Diego, Calif., on May 24, 2021. Northrop Grumman Photo

In addition to the new systems, the MQ-8C variant will have a new interface for its control station

“It’s an upgraded interface – a little bit more – easier to operate and user friendly, if you will. And it has some commonality amongst other Navy systems,” Eischeid said, noting the interface is also used on the P-8A Poseidon maritime patrol aircraft.

USNI News previously reported that Northrop had proposed the MQ-8C as an option for the Navy to conduct anti-submarine warfare missions.

“I can’t speak for the Marines other than I do feel we can certainly support those mission sets, you know certainly with the [electronic support measures] system we’re putting on that will support early warning and targeting capabilities,” Eischeid said when asked if the MQ-8C could help meet the Marine Corps’ desire for airborne early warning capabilities. “So certainly, I think we’re well-suited to support those missions. Absolutely.”

The MQ-8C is slated to deploy for the first time later this year.