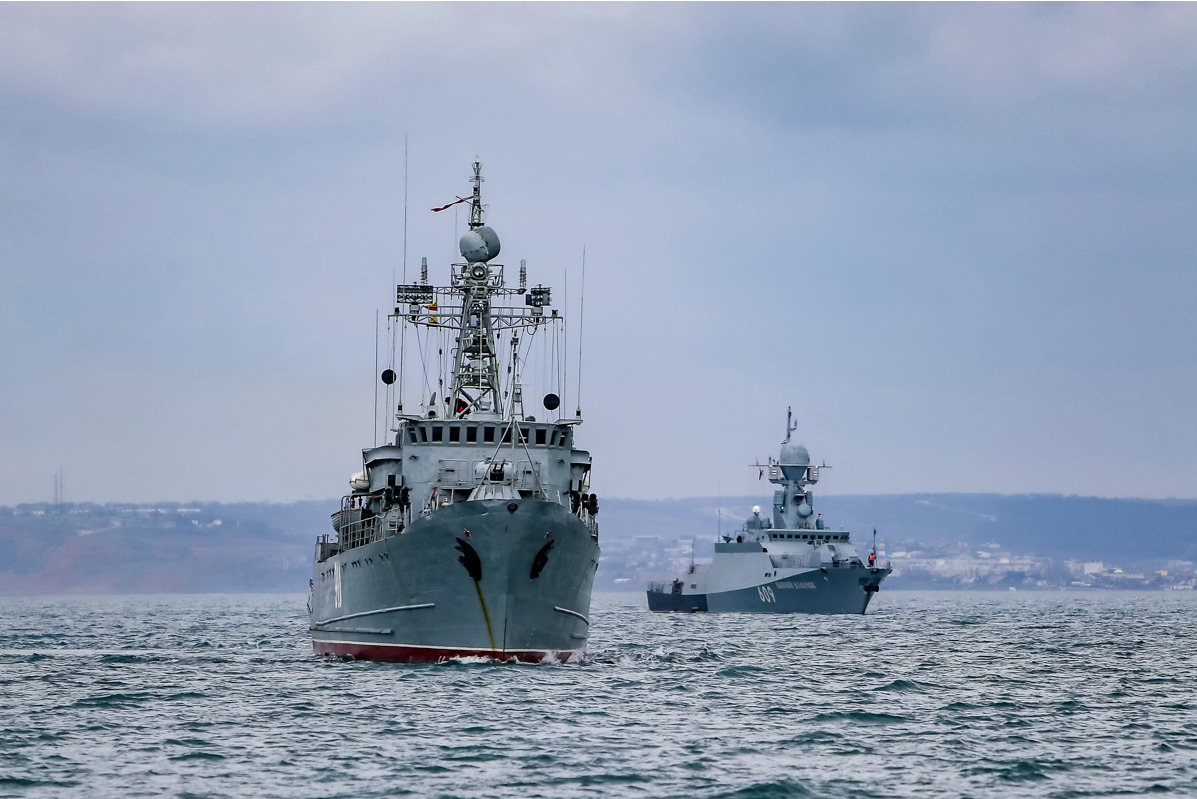 Christopher Bort, a specialist for Russia and Eurasia at the National Intelligence Council, said that since 2013 Putin has placed more emphasis on its naval presence — first in Syria, where it has a base, and then working to close a deal on establishing a naval logistics facility in Sudan.

Speaking at an Atlantic Council forum, he added that this increased naval visibility is “not just in the Mediterranean, but in the Pacific.”

But the realities of Moscow’s struggling economic situation mean translating a goal of building and maintaining a “great navy” needed to be a world power is “easier said than done,” Bort said.

In the Mediterranean, Bort said Russia wants to be seen “as the indispensable player” in wielding influence there. Examples are its military involvement in Syria and Libya, offering arms sales of sophisticated weapons to former client states, and involvement in regional infrastructure projects.

One long-term goal for Moscow in Libya could be the establishment of a naval presence there, as Russia has “played all sides of the games” in its civil war, he added.

Several times, he said Russia was “punching above its weight” in inserting itself into Mediterranean affairs like the civil wars in Syria and Libya. Moscow also wants to spread its influence through “transactional dealings” with Turkey, Iran, Israel and the Gulf states, nations historically at odds with each other and often also with Russia.

Laura Cooper, deputy assistant secretary of defense for Russia, Ukraine and Eurasia, said at the same event that the Kremlin has been very good “at touting minor [military] deployments” and investments it has made in Mediterranean nations.

The fact is, “Russia does not bring a lot of money to the region,” Bort added.

The Kremlin’s “role of peacemaker isn’t fooling anyone,” Cooper said. There is an “inherent tension in supporting relations with Iran” in Syria and “cozying up with Israel and the Arab countries.”

In all these moves, Russia is “dealing in interests” rather than values, Bort said.

Cooper said that, in its maneuverings, Russia “is looking at the next deal it can roll off the line,” like the sales of S-400 and S-300 air defense missile systems to Turkey.

For Turkey, the buy had consequences. Ankara was removed from the F-35 Lightning II Joint Strike Fighter program, and the threat of economic sanctions remains in place over the purchase of the S-400 and its army’s attacks on the U.S.-backed Syrian Democratic Front.

She added, “we’re clear about [consequences for broadening] mil-to-mil relations with Russia,” referring to the F-35 decision and Turkey’s membership in the NATO alliance.

As for how much longer Russia can support President Bashar al Assad, Bort said Moscow has not overstretched itself in the 10-year Syrian civil war. He estimated Russia’s operating cost at $2 billion annually.

Overextension, however, “is in the eye of the beholder.” He added the Russian public doesn’t “understand or care much” about Syria. For all the Kremlin’s efforts in the country in backing Assad, it “has not produced a peace settlement.” As a result, the war continues, and refugee crisis worsens.

The key difference between Washington and Moscow in the Mediterranean comes down to alliances and partnership. Cooper noted that Defense Secretary Lloyd Austin’s first official call was to Jens Stoltenberg, NATO’s secretary general, to re-affirm the American commitment to the alliance.

The refugee crisis from the Syrian and Libyan civil wars, economic and social problems in the African Sahel and Russia’s aggressive behavior in southern Europe has brought new alliance attention to the Mediterranean. The Navy is expected to add two Aegis destroyers to the four already at Naval Station Rota in Spain in the future, partially in response to stepped-up Russian naval activity.

The United States “will continue to be a strong presence” in the region. She said American and European Union investments in civilian projects and providing humanitarian assistance “dwarf” those of Russia.