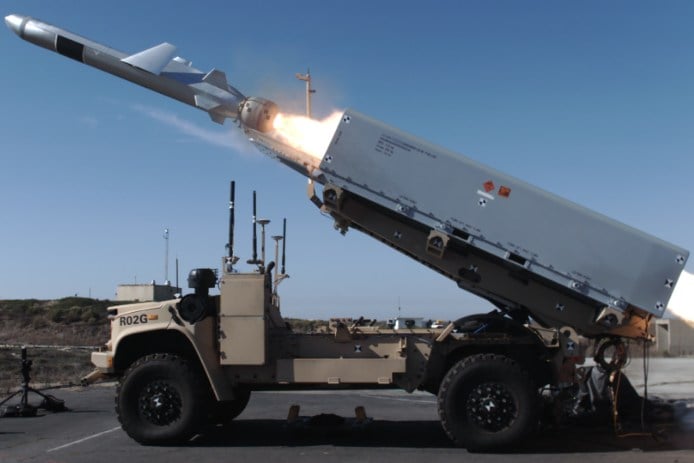 On Wednesday, Raytheon issued a photo of the Navy-Marine Expeditionary Ship Interdiction System (NMESIS) that took part in a November test in Point Mugu, Calif.

The Marines, working with Raytheon, used a Remotely Operated Ground Unit for Expeditionary (ROGUE) Fires truck to launch a Naval Strike Missile as part of a proof-of-concept test.

USNI News last year reported that the Navy and Marine Corps were pursuing ground-based anti-ship missiles to underpin the Marines’ Expeditionary Advanced Base Operations (EABO) concept. EABO would see the Marines moving between expeditionary bases set up on islands or shorelines in a region like the Pacific and working with the Navy fleet operating in nearby waters.

Lt. Gen. Eric Smith, the deputy commandant for combat development and integration, last year described the Marines’ plans to experiment with a Naval Strike Missile mounted on a Joint Light Tactical Vehicle (JLTV) with a launcher as a short-term way to achieve an anti-ship capability. But in the long-term, the Marine Corps could pursue the Ground-Launched Cruise Missile (GLCM), which Smith at the time said the Marines could also launch from a ROGUE Fires Vehicle, to hit longer-range targets.

“We’re often asked, what are Marines doing with an anti-ship missile? And the response for us is actually fairly simple: we are the littoral combat force present within the Pacific and specifically in the first island chain, and as that force we already can fire with our coordination with the Army off of the High-Mobility Artillery Rocket System, HIMARS,” Smith told the Senate Armed Services seapower subcommittee last March.
“We can fire an Army ATacMS (Army Tactical Missile System) missile that goes out a couple hundred miles. It makes sense to us that any force that is the littoral combat force should have a weapons system that can place a threat on an enemy ship.”