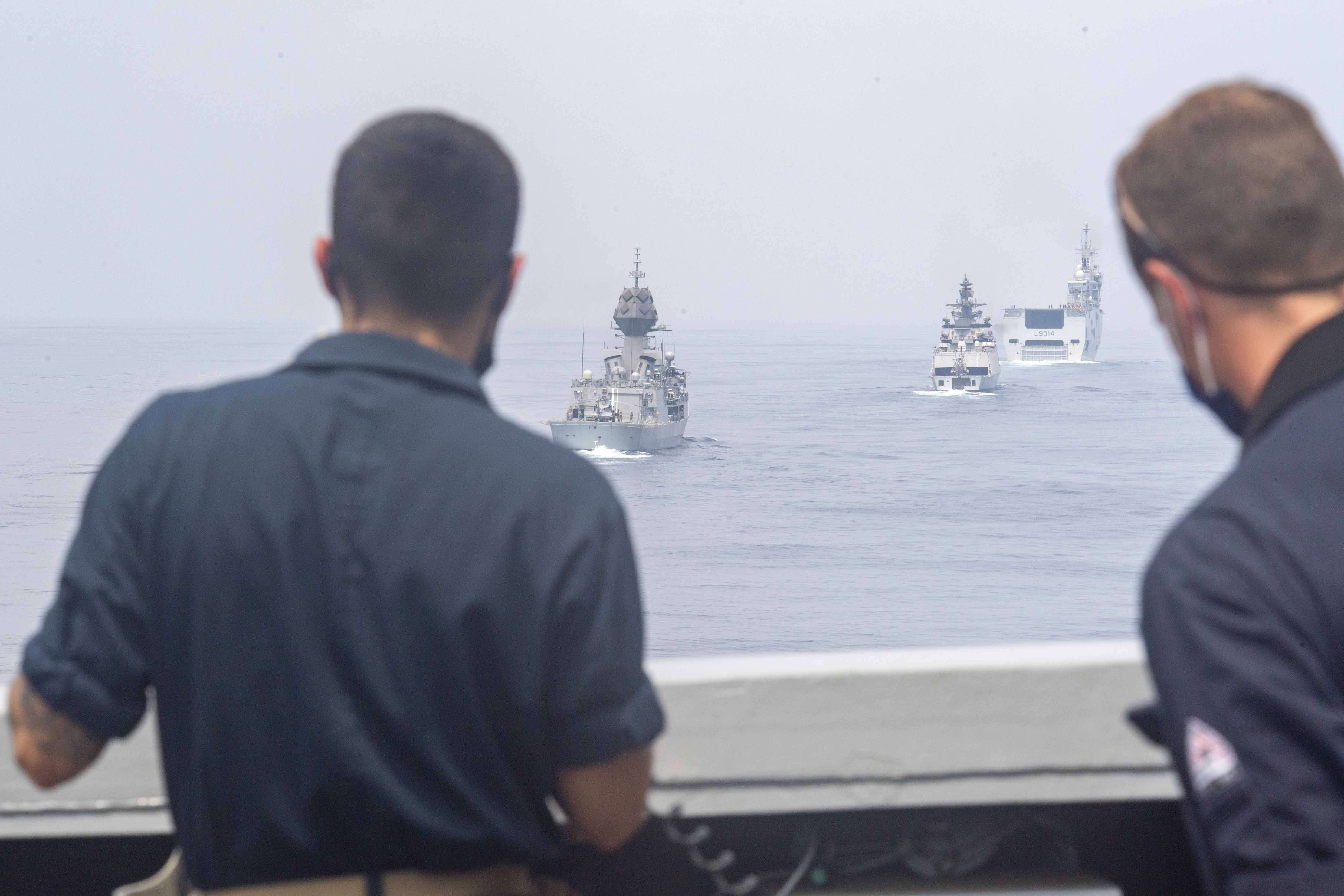 Amphibious warship USS Somerset (LPD-25) joined ships and aircraft from five countries in the Bay of Bengal last week for a multi-lateral exercise designed to help the navies quickly organize and operate as an integrated, combined maritime force.

French-led exercise La Pérouse was “notable” because ships from the U.S., France, Japan, Australia and India “were able to quickly aggregate into a multi-national, maritime force,” said Cmdr. Dave Kurtz, who commands San Diego, Calif.-based Somerset. “Out here at sea, it is truly an honor to work alongside each of these partner nations as we learn to be stronger together as a force.”

“It’s important for us – Somerset and the Navy – to work with our allies and partners to ensure security and stability in our area of operations,” said Kurtz, speaking during a media call from the ship last Thursday as Somerset sailed in the Indian Ocean. Exercise La Pérouse “has been a perfect example of a way to strengthen ties between these nations and to collaborate as maritime professionals here at sea.”

While the French big-deck amphib Tonnerre joined in the training, the exercise didn’t include any amphibious training. “This was strictly maritime operations and maritime theater interoperability,” Kurtz said, noting that “we on Somerset gained a lot of experience working with the partner nations and getting that understanding that we are more alike than we are different when we are operating at sea.”

Such interoperability hinges heavily on the ability and capacity for each nation to talk and work together from the same page, operating as a maritime flotilla.

Among the lessons learned is the recognition that “there are different communications paths that… can be refined in the future,” Kurtz said. From a standard operating procedure perspective, “we speak, from a maritime perspective, the same language. Our signal flags are common – the signals that we send to each other via flags, via light signals are common and enables us to be able to conduct some more advanced operations such as replenishment at sea practice with very little coordination. It would not be much different for us to be doing it with U.S. ships as it was for us to be doing it with Japanese ship Akebono or with a French ship.”

“From a communications standpoint, we’re able to work back and forth with our partner nations to step through these pre-planned responses,” he added, “and enable us to understand how the communications flow would work, how the data link information could be passed back and forth, and to learn from each other where we did things correctly and where we can improve in the future.” 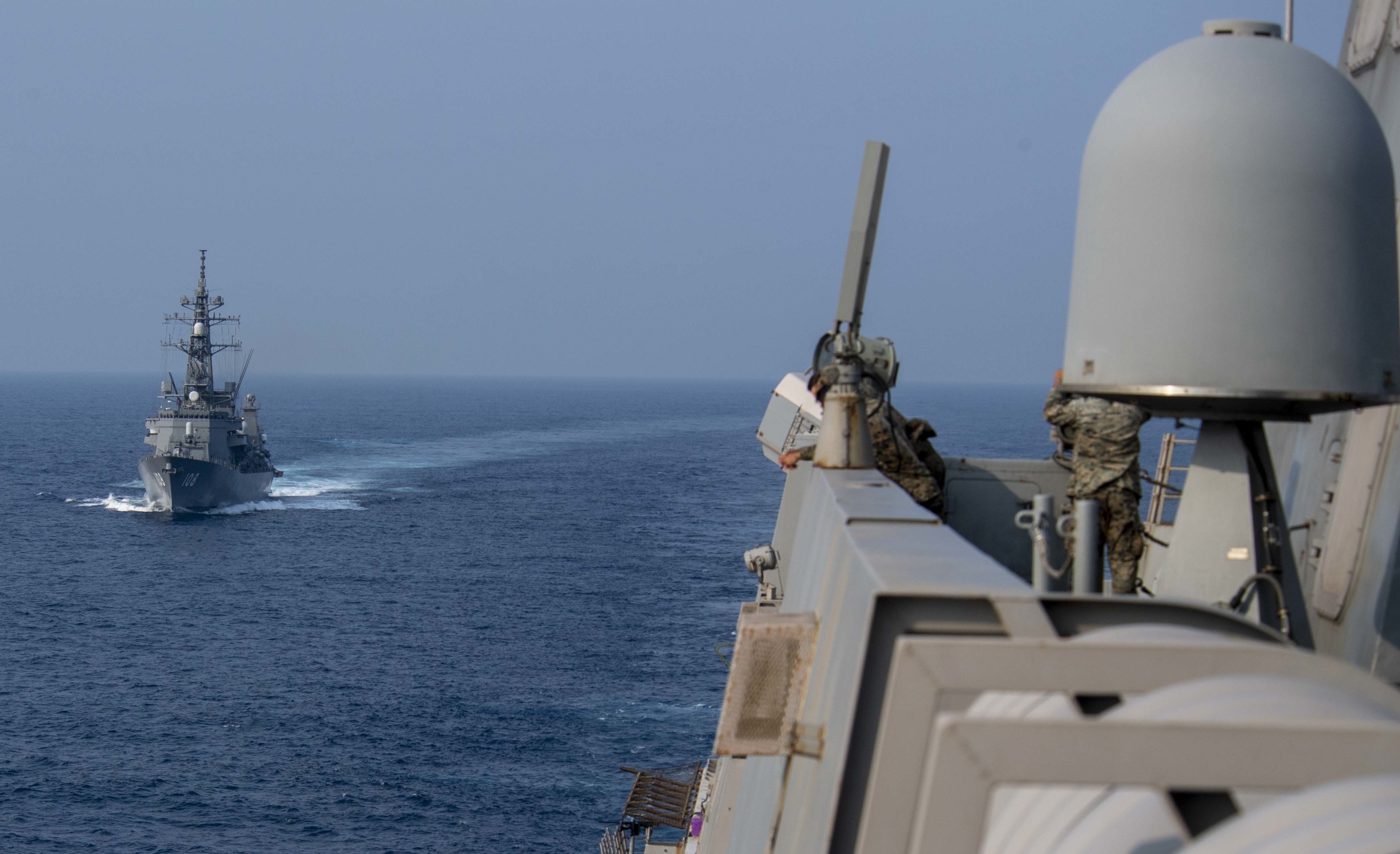 The U.S. Navy regularly trains and interacts with each of the nations that participated to strengthen military ties and learn to operate together, but it’s rarer to train with multiple navies at sea at the same time. While La Pérouse stretched over only three days, it “helped build our interoperability a lot faster,” said Kurtz, a career naval aviator who previously was the executive officer of aircraft carrier USS Nimitz (CVN-68).

Typically, a ship trains with one nation for some events and then splits off to train bilaterally with another partner. “Lessons learned in one oftentimes have to be relearned in the next exercise,” he said. “So by having five different nations operating together here, we’re able to accelerate that learning curve across the different maritime nations and really help to expand the things we were able to learn.”

“Now I’m confident that the next time we exercise bilaterally or multilaterally with each of these nations in the future, we’ll be one step closer to more understanding, because we’ve been able to build this gap a little bit faster,” Kurtz added.

The French navy planned and coordinated the multilateral exercise, held April 5-7 during the French Navy’s annual midshipman deployment. Its primary goal, according to the U.S. Navy, was to demonstrate “the shared values with friendly navies ensuring freedom of seas and commitment to an open, inclusive Indo-Pacific and a rules-based international order.”

“Honing our skills and capabilities at sea with some superb allies and partners makes us undeniably more effective as a maritime force,” Rear Adm. Fred Kacher, who commands Expeditionary Strike Group 7, said in a Navy news release. “We were honored to participate in La Perouse and our combined efforts here and in other routine exercises and operations help to ensure security and stability in the Indo-Pacific Region.”

“We were able to utilize those as a force, together with the other ships in La Pérouse for purposes of training to our joint pre-planned responses… a series of actions that we would take in an escalatory or de-escalatory fashion to identify and track potential threats,” Kurtz said. “So having aircraft in the air – in our case, the H-1s, to act as an opposing force that allows our controllers and our ships to step through those measures in a focused way – helps to enhance our training together, much like a football team would step through plays.” 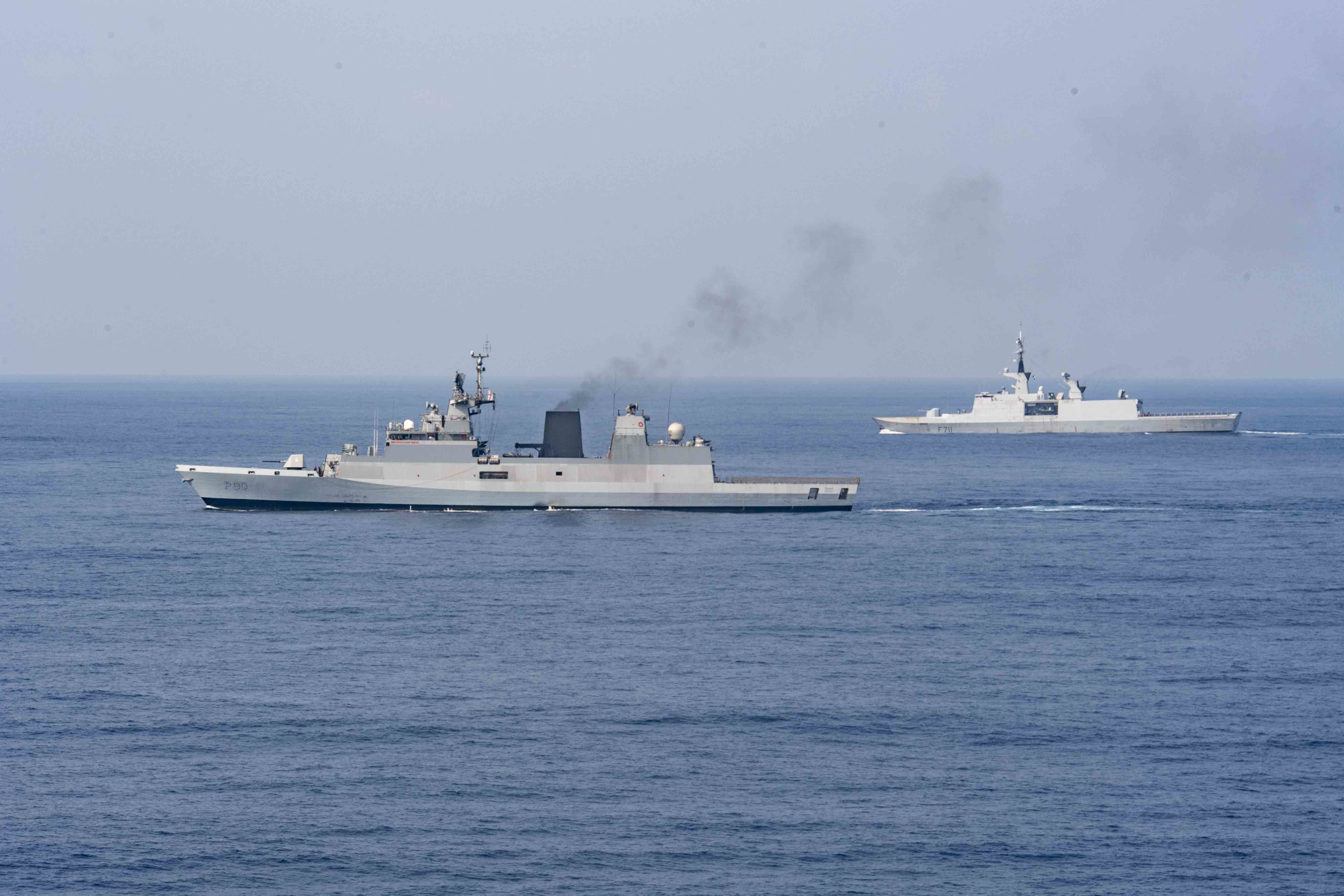 During the exercise, ships were split into task groups – Somerset-led Task Group 2 – and ships rotated into different task groups. “The ship who was in control of each one of these specific events would rotate around, so that partner nations could practice their procedures,” Kurtz explained, “and then we could practice and we could learn from each other by listening in and by communicating across the ships as we capture those lessons immediately after each event and then in an overall debrief later on.”

Somerset worked with Akebono on the first day and Surcouf and Kiltan on subsequent days. “Through that sort of rotation of individual units, we were able to understand what each individual unit could bring to the overall maritime force that was assembled,” he said. “By rotating the responsibilities for driving the formation and for conducting the exercise, each nation and each unit is able to build on their capabilities and expand their knowledge being part of an event and then leading an event. It’s important for each … to have that opportunity, to see how the other nations work and then step into the leadership role and drive the event.”

While Somerset does that regularly as part of the ARG and large-scale exercises, “to be able to hand that leadership role off to nations that often don’t get a chance to conduct those exercises is great training and a confidence boost for them, and it allows us to learn as well,” Kurtz said.

The exercise “sends a great message to our partners and our allies that didn’t participate but understand that we love to participate in these types of engagements in the future and expand our capabilities to expand throughout the globe and specifically here in the Indo-Pacific region,” he said.

This year, due to the COVID-19 pandemic, ships’ crews didn’t get the chance to visit other ships. Still, Kurtz noted, “the flexibility demonstrated by the nations … in overcoming those obstacles and still being able to gain a lot of exposure and experience and proficiency is a testament to the professionalism of those nations and of those navies.”