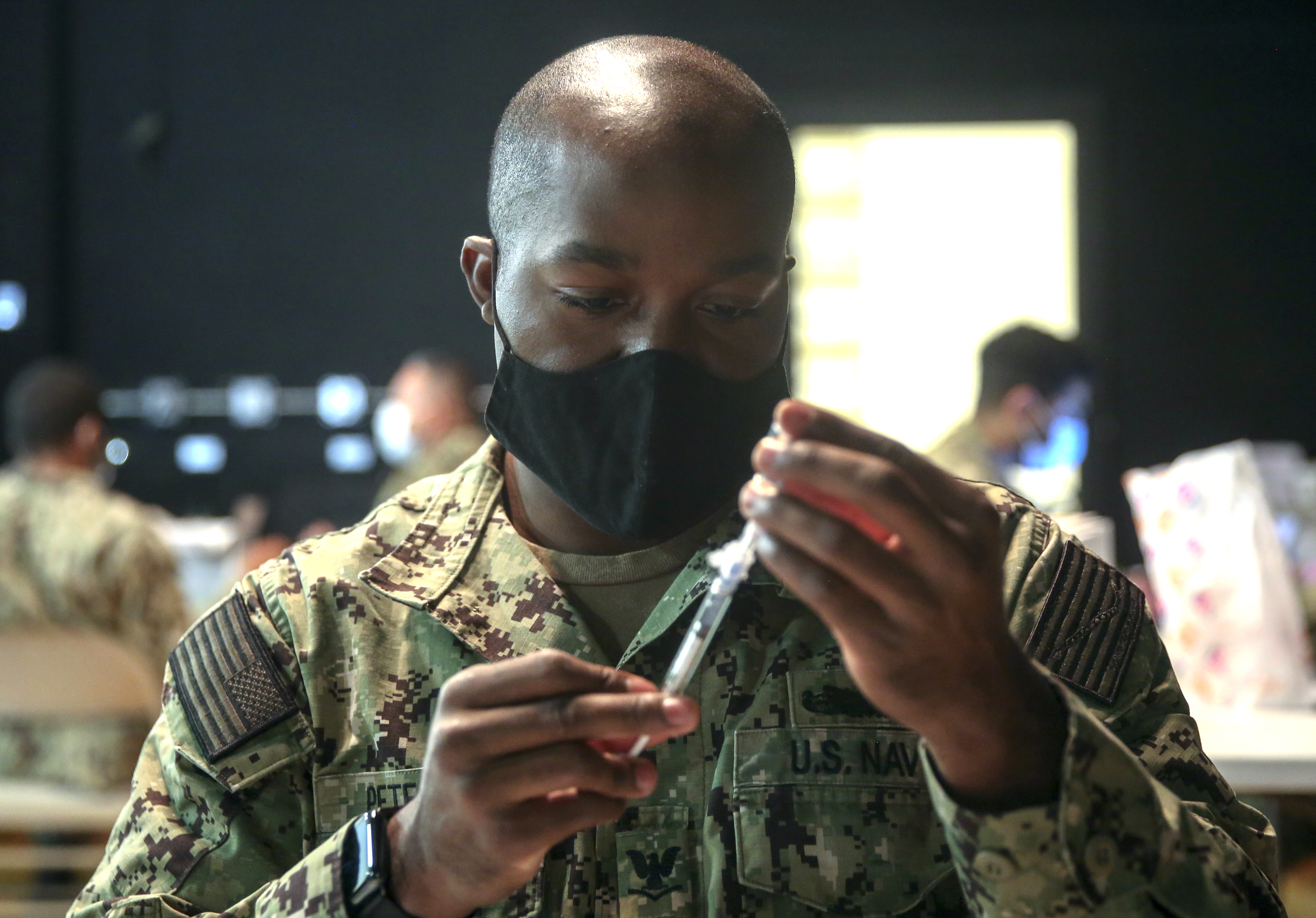 About one-third of service members offered either of the COVID-19 vaccines in the United States are turning down the shots, according to an official working for the Joint Chiefs of Staff.

During a Wednesday hearing, witnesses repeatedly told members of the House Armed Services Committee that as long as the COVID-19 vaccines remained approved for “emergency use,” service members cannot be compelled to receive the shots.

Although more than 900,000 dosages have been administered in the Pentagon, ranking member Mike Rogers (R-Ala.) said, “I’m not sure we can wait two years” for full Food and Drug Administration approval of the vaccines.

About 147,000 service members have received both shots.

The main reason for immediate concern, in his estimation, were the emergence of COVID-19 variants that are affecting different age groups and in new ways. Other panel members later in the hearing echoed his concern, including the possibility of having to receive additional shots to be protected, as another reason to push vaccination in the ranks.

The rejection numbers are also occurring in the top categories the Pentagon wants vaccinated — strategic forces, health care workers, those deploying and the most vulnerable.

Air Force Maj. Gen. Jeff Taliaferro, vice director of operations for the Joint Chiefs of staff, said “we need to continue to educate our force” on their value and also to have leadership involvement in this effort.

Robert Salesses, who is performing the duties of the assistant secretary for homeland defense and global security, said he thinks “the opportunity to educate and inform [active duty, reserve forces, National Guardsmen, DoD civilians, contractors and families] will reduce this significantly.”

USNI News recently reported that 70 percent of sailors who have been offered a COVID-19 vaccine have accepted as of late January.

The categories for vaccination priority inside the department holds true for the National Guard, but not for “essential workers” at civilian shipyards like Newport News Shipbuilding.

Positive testing rates among active-duty service members are running about one percent below the civilian population. “We have mirrored what happened in the communities where our installations are located,” said Air Force Brig. Gen. Paul Friedrichs, the Joint Staff surgeon. He attributed the lower rate to the military population being younger, healthier and more active than the general public.

Salesses and others said that although vaccination supplies are increasing “exponentially” in production and distribution, it would be “sometime in July and August” when enough would be on hand for everyone.

When pressed later as to why service members were rejecting the vaccinations, Taliaferro said “we don’t precisely know why an individual hasn’t received the vaccine.” Friedrichs said the Defense Department is collecting the data to determine the breakdown of vaccine acceptance by gender and if service members of color were refusing the shot.

After noting that 200 Navy ships had reported COVID cases, Rogers and others later asked if those who said no to the shots were still deployable.

As for the pandemic’s impact on active-duty readiness, Taliaferro said there has “been some quality loss in the larger formation training and exercises,” but overall readiness remains at acceptable levels because forces were training “in smaller formations.”

Air Force Maj. Gen. Steven Nordhaus, director of operations for the National Guard Bureau, said that “to date [Guardsmen] have been able to meet all deployments,” including those in support of civil authorities in vaccine distribution and the recent deployment to Washington, D.C., in the wake of the assault on the Capitol.

He added that not only were Guardsmen tested before and after deployments, but there was also follow-up “contact tracing” with those who interacted with the soldiers and airmen.

Newport News is “being supported by the state allocation” of vaccines, not the Defense Department’s, Salesses said. He added that the Pentagon “is willing to talk to organizations to see what we can do to answer” their needs.