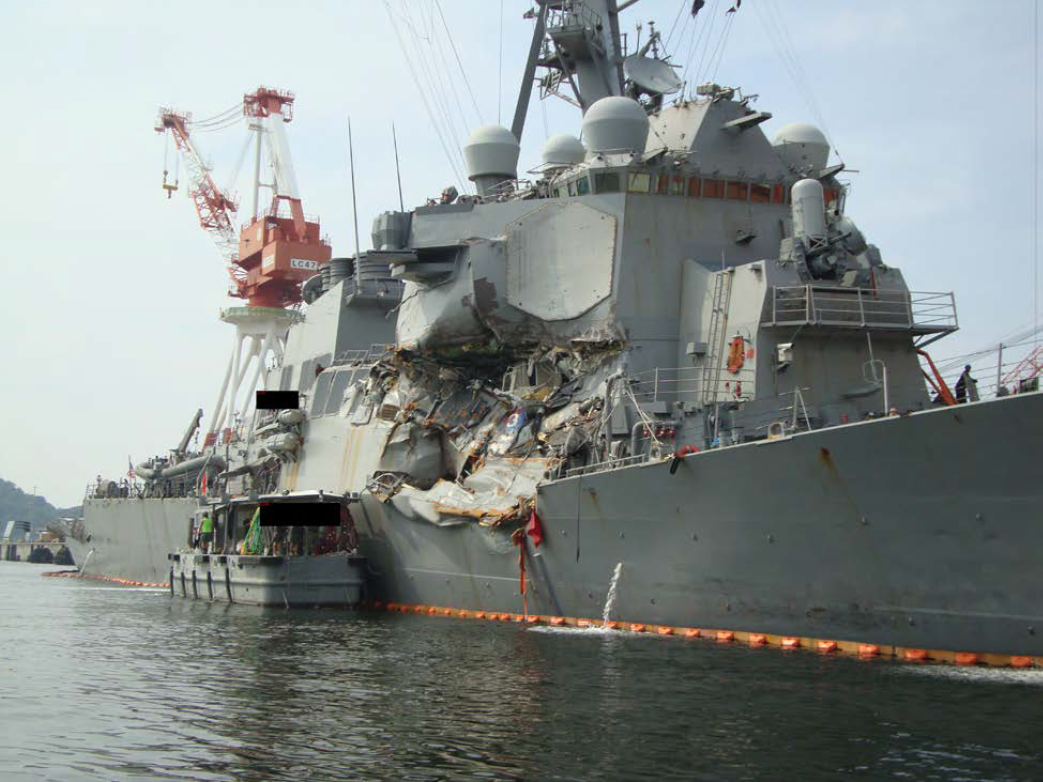 Federal investigators highlighted an “unexplained course change” by a U.S. guided-missile destroyer as “a critical error” that put the warship on the path to the fatal 2017 collision that would kill seven sailors, according to a new report released Thursday.

Eight minutes before the collision with the merchant ship ACX Crystal in a busy shipping lane off the coast of Japan, USS Fitzgerald (DDG-62) – traveling at 20 knots – adjusted its course 10 degrees, setting the stage for the collision, according to the National Transportation Safety Board report.

“This course change proved to be a critical error, and investigators were unable to determine the reason for it,” reads the report.
“The study found that if the Fitzgerald had not made the course change from 190° to 200° 8 minutes before the collision, the destroyer would have passed ahead of the ACX Crystal with a [closest point of approach] of about 1,000 yards, or about a 1/2 nautical mile. Therefore, the NTSB concludes that the Fitzgerald’s unexplained small course change to starboard minutes before the collision put the vessel on a collision course with the ACX Crystal.” 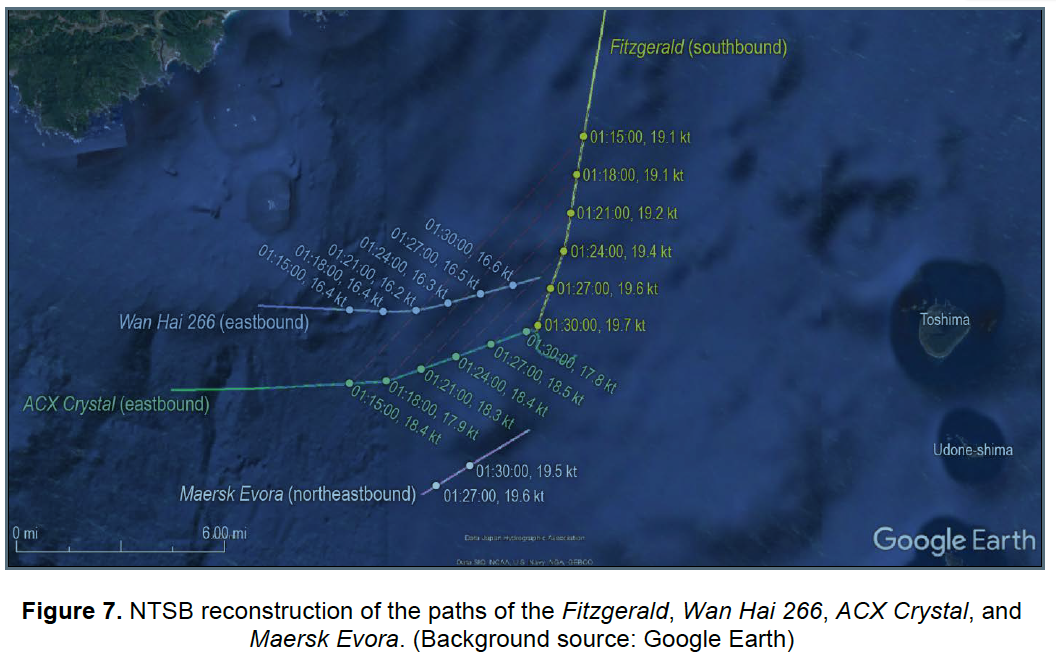 The course change was entered into the ship’s log, but investigations were unable to find a reason for the adjustment. The revelation of the course change was one of the few new pieces of information contained in the first independent assessment, which was released today, almost three years after the Navy’s own probe.

The independent assessment of the collision places most of the blame on failings of the watch team on the bridge of Fitzgerald. The bridge team had failed to move out of the way of the container ship that had the right of way, according to the maritime rules of the road.

The NTSB “determines that the probable cause of the collision between U.S. Navy destroyer Fitzgerald and container ship ACX Crystal was the Fitzgerald’s bridge team’s failure to take early and substantial action to avoid collision as the give-way vessel in a crossing situation,” reads the report.
“Contributing was ineffective communication and cooperation among the Fitzgerald crew on the bridge and in the combat information center (CIC), and the Fitzgerald commanding officer’s (CO) insufficient planning for the hazards of the vessel’s intended transit.” 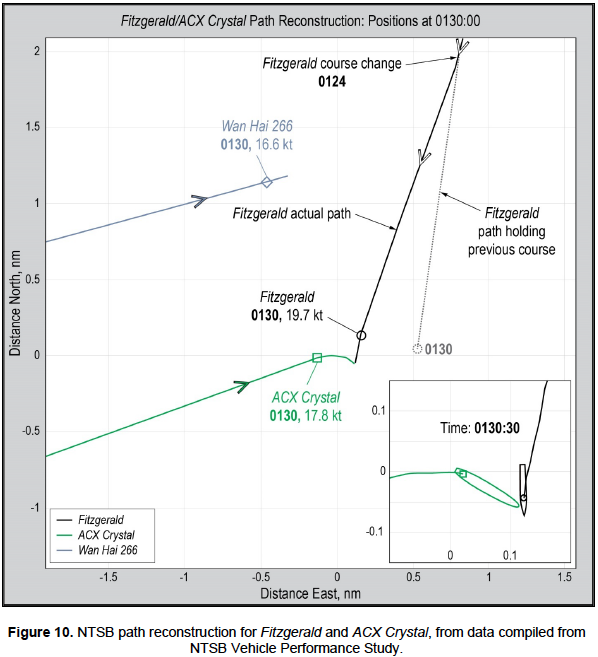 The report faults the Navy’s “ineffective oversight of the Fitzgerald in the areas of operations scheduling, crew training, and fatigue mitigation,” as contributing factors to the collision.

“The Fitzgerald’s aggressive schedule leaving port to comply with certification requirements and to return to its deployment schedule provided little rest on the day before the accident. The schedule for the Fitzgerald was developed with the assistance and input of the ship’s shoreside command and this type of schedule appeared to be the norm for this area of Navy operations,” reads the report.

The report also said the crew of Crystal could have done more to indicate to Fitzgerald they were in danger by radioing and signaling the warship’s crew.

The NTSB report comes more than three years after the collision on June 17, 2017, and two and a half years after a Navy investigation placed the blame on the crew and the commander of the Japan-based guided-missile destroyer.

“The collision resulted from a compilation of failures by leadership and watchstanders to plan for safety, appropriately adhere to sound navigation practices, execute basic watchstanding principles, properly use navigation tools, and deliberately and effectively respond when in extremis,” read the December 2017 review from then-U.S. Fleet Forces Command Commander Adm. Phil Davidson.

Fitzgerald was less than a day into a last-minute, no-notice mission as a replacement for Japan-based destroyer USS Stethem (DDG-63). Fitzgerald was bound for a freedom of navigation operation in the South China Sea when it collided with ACX Crystal in the shipping lane for cargo traffic heading toward Tokyo. 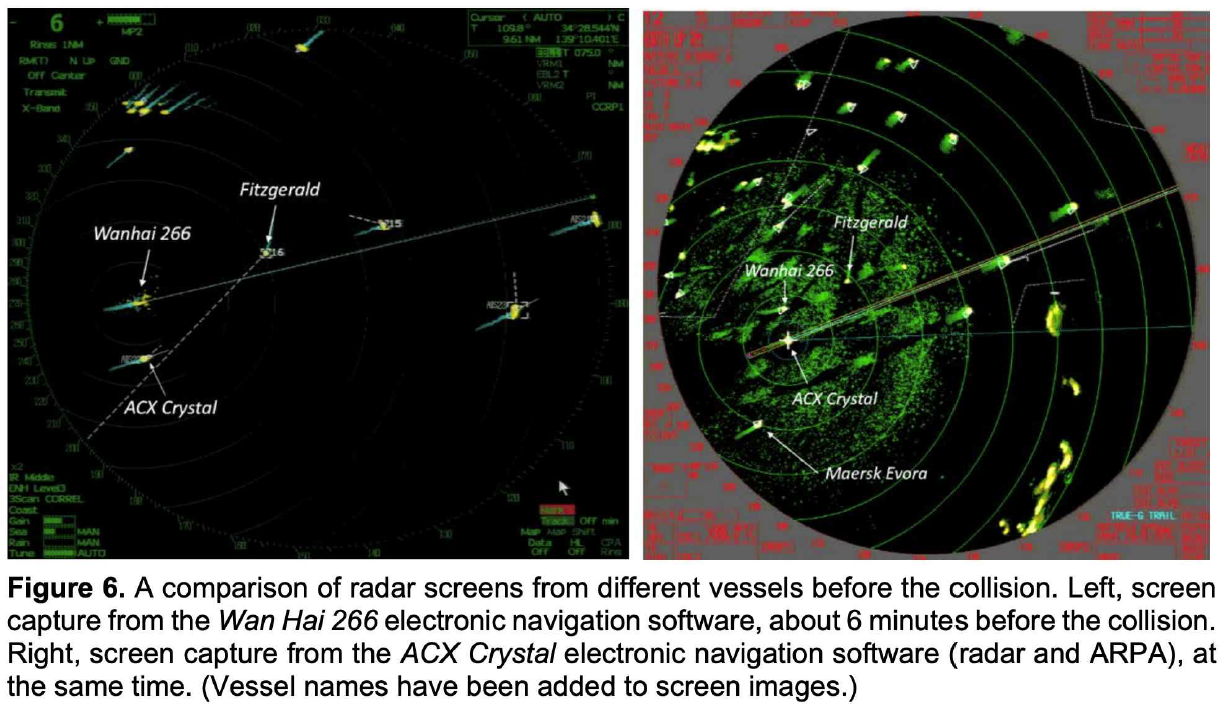 Both the Navy and NTSB investigations broadly outline the failures of the bridge crew to keep awareness of the ships around them.

“The bridge team and CIC did not function effectively as a team, and the OOD (officer of the deck) on watch displayed a lack of familiarity in the application of the rules of the road and did not follow the CO’s standing orders. Although the CO had a responsibility to ensure that watchstanders were properly trained and qualified, the Navy’s training organization and the CO’s superiors were required to assess and certify that the operating procedures and the watchstander qualification system were effective,” reads the report.

Both the bridge team and the watchstanders in the ship’s combat information center were not completely aware of the traffic around the warship.

“The OOD told investigators that she saw the ACX Crystal’s superstructure about a minute before the collision and she realized the Fitzgerald was not going to clear the containership,” reads the NTSB report.

The bulbous bow of the merchant ship collision pierced Fitzgerald‘s hull below the waterline and flooded an enlisted berthing area, drowning the seven sailors. The flared bow of Crystal ripped open the superstructure of the destroyer at the commander’s cabin and left CO Cmdr. Bryce Benson dangling against the hull, with sailors on the bridge rescuing him and bringing him back inside the ship. The crew was able to save the ship and brought it back to port in Yokosuka, Japan.

The collision of Fitzgerald – and the subsequent collision of USS John McCain (DDG-56) with a merchant tanker off Singapore on Aug. 20, 2017, that killed 10 sailors – resulted in the removal of a wide swath of Navy Pacific Fleet leadership and sparked an overhaul of surface warfare training, manning and maintenance.

A Thursday Navy statement to USNI News said that much of what the NTSB recommends in its report has already been implemented in a wider push for reform.

“We have applied those lessons aggressively to the way we train, operate and fight our ships throughout the surface fleet – our Sailors sail confidently and safely every day. From the more than 100 recommendations from our own reviews, many already address the shortfalls indicated within NTSB’s investigation and, in some cases, go beyond them. Again, we appreciate NTSB’s critical role in promoting maritime safety for all mariners and offer our deepest condolences to the families of the fallen USS Fitzgerald sailors.”