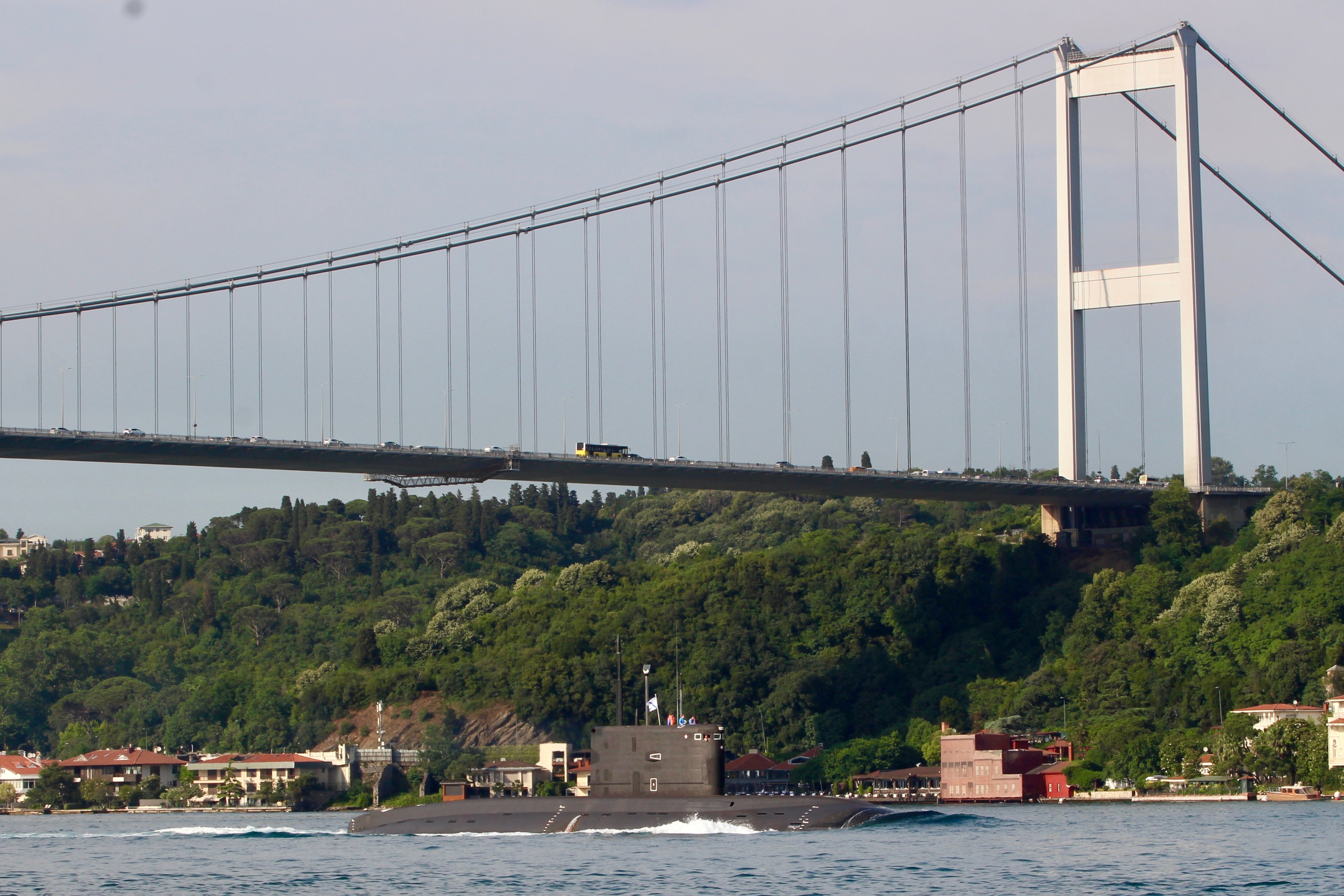 The Russian Navy’s Black Sea Fleet recently has been deploying its submarines to the Mediterranean, despite a decades-old international treaty which many thought would prevent those deployments.

The deployment of these submarines to the Mediterranean is a serious concern for NATO leadership. Speaking at the International Institute for Strategic Studies on June 25, Adm. James Foggo, Commander of U.S. Naval Forces in Europe and Africa, described the Eastern Mediterranean as “one of the most kinetic areas in the world.” He said, “the Russians are deploying quiet, modern, diesel submarines capable of launching the Kalibr cruise missile.”
This refers to diesel-electric Kilo-class boats deploying to the region from the Black Sea via the Bosporus.

“A Kilo-class submarine can go anywhere in European waters and strike any European or North African capitol from under the waves. You don’t see it coming,” Foggo said. He spoke just two days after the Russian latest boat, Rostov-on-Don, had passed through the Bosporus.

How Russia Has Changed The Norm

Russia disestablished its Mediterranean squadron in 1993 following the end of the Cold War. During the Cold War, the submarines of the squadron had been drawn from the Northern Fleet, based in the Arctic, and the Baltic Fleet. This was because the Montreux Convention stopped them from using the Black Sea Fleet’s subs.

The current pattern started in 2015, shortly after Russia’s intervention of the war in Syria. The same submarine, Rostov-on-Don, paused shortly in the Mediterranean during its delivery voyage to the Black Sea. It launched Kalibr missiles at targets in Syria before transiting the Bosporus Strait. Then in 2017, another Kilo-class boat, Krasnodar, did the same thing. This time its pre-delivery combat excursion was longer, a couple of months.

As Krasnodar entered the Black Sea, two additional boats, Velikiy Novgorod and Kolpino, started their own pre-delivery combat deployments. This time they operated for much longer, more than a year. When they did eventually sail through the Bosporus, it was “for the first time after their construction or purchase.”

With all six improved Kilo-class submarines destined for the Black Sea Fleet now there, Russia could not use the pre-delivery clause again. Therefore, the two boats which replace Velikiy Novgorod and Kolpino on station in the Mediterranean had to pass out of the Black Sea. Thus, Staryy Oskol and Krasnodar passed south through the Bosporus ostensibly for scheduled maintenance.

The move raised eyebrows at the time, with the USNI News writing that if the submarines conducted military operations it could be considered a breach of the Montreux Convention.

Russia has sent a few subs out of the Black Sea for maintenance previously, but those moves were more straightforward. The closest precedent to the more recent actions might be in 2011, when an older Kilo-class submarine, Alrosa, briefly paused while on its way for repairs to take part in an international submarine rescue exercise.

Staryy Oskol and Krasnodar both reported for duty in the Mediterranean after transiting the Bosporus. One of them, Krasnodar, was still there in June. Another two submarines have since passed south through the Bosporus for so-called scheduled maintenance.

The Shift In The Balance of Power

Russia now has, in effect, a permanent submarine force in the Mediterranean using Black Sea Fleet diesel-electric boats, despite the Montreux Convention. Russia could already deploy submarines to the Mediterranean from its Baltic and Northern Fleets. But these fleets are further away and have competing priorities. Therefore, the Black Sea Fleet’s Kalibr-capable Kilos have become the submarines of choice.

The new status quo could see Russia liberate itself from the spirit of the treaty while keeping other countries such as the U.S. and its NATO allies bound by its terms. The NATO response to the situation has been muted. Many countries are preoccupied with other topics, and there have not been any signs of political consequences for Russia.

Western planners may be imagining a future where the Russian Navy mirrors its position in Tartus, Syria, with a similar foothold in Libya.

Turkey should also have cause for concern. The submarines are deploying directly to a military conflict where Russia and Turkey are taking opposing positions. The same is true of the conflict in Libya. Turkey has the means to stop vessels transiting, at least in peacetime. The political situation between the two countries is delicate, however, and for the moment there are no overt signs that Turkey will react.

A version of this post previously appeared on Naval News and has been reprinted with permission.