The Navy has had more warships operating in the Caribbean and the Eastern Pacific in the last three months than it has in the last five years, pushing the results of a U.S. effort to seize drugs at sea to all-time highs.

Since the start of April, an average of six warships with embarked Coast Guard law enforcement detachments have been underway at any given time in U.S. 4th Fleet, as part of a swiftly organized Trump administrative initiative to pour more Defense Department assets into the anti-drug fight, according to data from USNI News Fleet Tracker.

While concerns in U.S. Southern Command vary from terrorist organizations, the fallout from the political upheaval in Venezuela and the creeping soft-power influence of China and Russia in South America, transnational organized criminal groups funded by illicit drug sales in America have been repeatedly cited as the most destabilizing threat in the region.

“The vicious circle of threats in this hemisphere where transnational organized crime and drug trafficking leads to corruption, instability and undermines the rule of law,” Vice Adm. Steven Poulin, Coast Guard Atlantic Area commander, told USNI News in an interview last week.
“It creates a permissive environment for other bad things to happen. So when we go after a transnational organized crime, when we interdict drugs, we’re helping to promote stability, security and prosperity in the Western hemisphere.”

For the Navy, it’s the most presence the service has been able to generate for 4th Fleet since 2015. Before then, the U.S. Navy’s regular presence in SOUTHCOM came via Oliver Hazard Perry-class frigates (FFG-7) that hosted Coast Guard law enforcement detachments (LEDETs) that carried the legal authority to interdict and arrest drug traffickers on the high sea.

With the retirement of the last of the Perrys, Coast Guard cutters have picked up most of the slack in the Caribbean and the Eastern Pacific to interdict the seaborne drugs bound for the U.S. The Navy presence has been largely limited to transit presence, the occasional guided-missile destroyer to exercise with Central and South American navies as part of the UNITAS exercise series, and visits to the region by hospital ship USNS Comfort (T-AH-20).

Recently, though, SOUTHCOM has deployed support ship M/V Kellie Chouest with a military detachment aboard and an unmanned aerial vehicle to provide additional capacity, to supplement the Coast Guard’s National Security Cutters for the interdiction mission. Littoral Combat Ship USS Detroit (LCS-7) and a Spearhead-class Expeditionary Fast Transport (EPF) have also deployed recently to the region. The Coast Guard has also made use of ScanEagle unmanned aerial vehicles from its cutter fleet to improve its own maritime domain awareness.

Still, while the U.S. has extensive intelligence on drug shipments, it lacks platforms to host the Coast Guard LEDET teams to complete the interdiction.

In Fiscal Year 2018, the Coast Guard interdicted 7.4 percent of the almost 3,000 tons of cocaine understood to be moved across SOUTHCOM by the Joint Inter Agency Task Force (JIATF) South, according to its latest performance report released in 2019.

“Counter-narcotic operations demand platforms for the endgame, working with law enforcement to take both the detainees we gain intel from and drugs off the street here in the U.S.,” SOUTHCOM Commander Adm. Craig Faller told the Senate Armed Services Committee in January in a pitch for more assets.

In an interview in February, Faller told USNI News that additional platforms were key to building more capacity with the more than 30 U.S. partner countries in the region.

Two months later, during the height of the COVID-19 pandemic, the platforms arrived shortly after an announcement at the White House.

“As governments and nations focus on the coronavirus, there is a growing threat that cartels, criminals, terrorists and other malign actors will try to exploit the situation for their own gain,” President Donald Trump said at the time. “We must not let that happen.”

Shortly after the White House directive, the Navy tasked a mix of destroyers to operate in SOUTHCOM. Escorts assigned to the Theodore Roosevelt Carrier Strike Group patrolled the Eastern Pacific while their carrier was pier side in Guam battling a COVID-19 outbreak.

Before USS Kidd (DDG-100) was waylaid in San Diego, Calif., with its own outbreak, it had been operating as part of the patrols.

In the Caribbean, escorts from the Harry S. Truman CSG were assigned to the counter-drug patrols while the carrier was loitering just off the East Coast to avoid COVID-19. 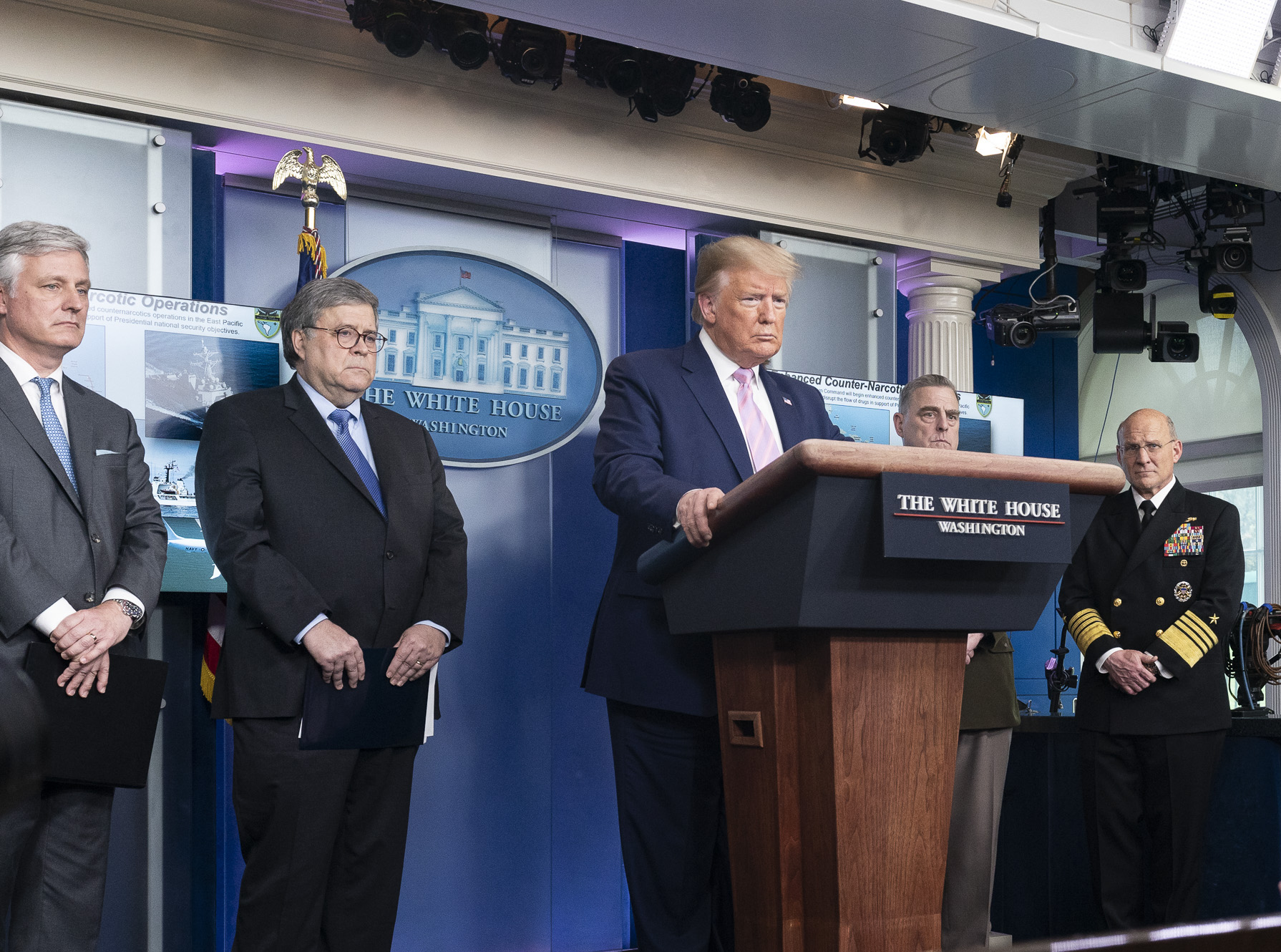 The appeal of using destroyers, beyond their ability to launch helicopters, is the ability for the ships to remain at sea for extended periods of time without heading in to shore.

To support sustained operations at sea, 4th Fleet needed to beef up its logistics assets. The assigned fleet oiler USNS Laramie (TAO-203) has allowed cutters and warships to operate longer on station and interdict more narcotics.

While the administration’s move to retask destroyers to 4th Fleet reportedly met pushback in the Pentagon, it had an immediate effect in SOUTHCOM.

“It’s a huge uptick since the end of March. I think you’re probably aware we’ve had seizures between United State and our partners of over a billion dollars street value of narcotics off the water. Just our Navy alone has been several hundred million dollars of that. It’s incredible. And our partners deserve credit for the work that they continue doing, both ashore and at sea,” 4th Fleet Commander Rear Adm. Donald Gabrielson told USNI News in a June interview. 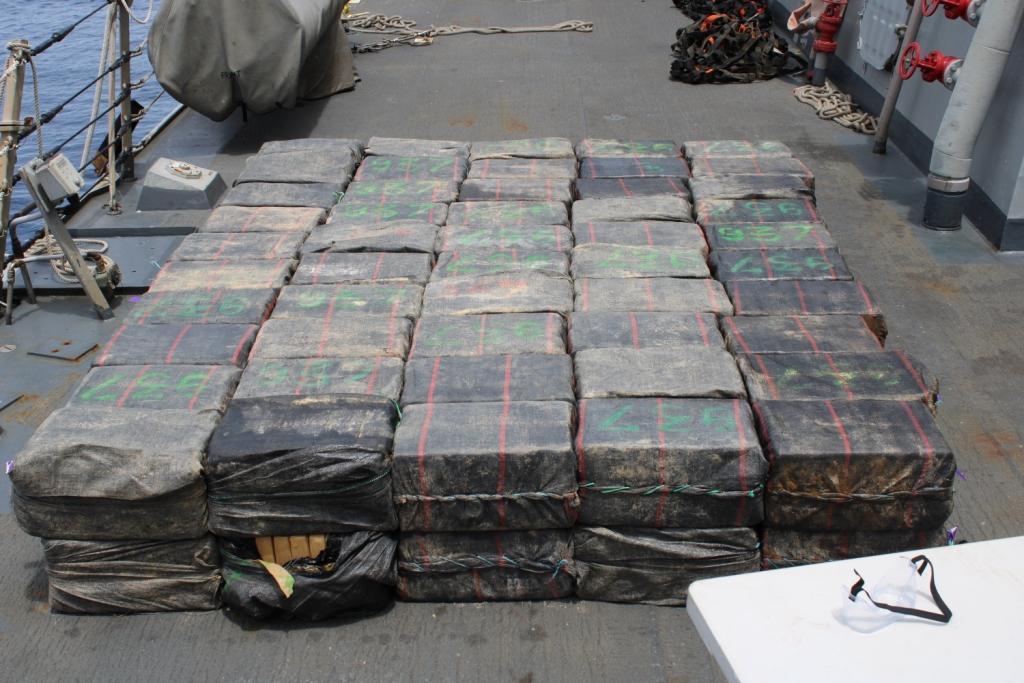 While neither the Coast Guard or SOUTHCOM has published a complete tally of the of the seizures, there have been 13 announced narco-sub interdictions in 2020 – a significant increase from the last several years, wrote submarine expert H.I. Sutton.

Both Gabrielson and Poulin give credit for the uptick to the numbers of platforms available to stage Coast Guard LEDET teams and snipers trained to disable high-speed boats.

The LEDETs include visit, board and search and seizure (VBSS) teams that have the legal authority to arrest narco-sub crews and seize the cargo. Trained to deal with infectious diseases, the teams conducted more than 50 boardings during the pandemic as of early June, with no COVID-19 infections for the Coast Guard teams.

“All of the boardings for many years have been conducted in an environment that expects communicable disease, whether it’s tuberculosis or other really awful things,” Gabrielson said.
“We’ve just raised the bar a little bit more to make sure that we have all the, the right personal protective equipment and other procedures in place. They were already at a really high level of readiness to conduct this mission.” 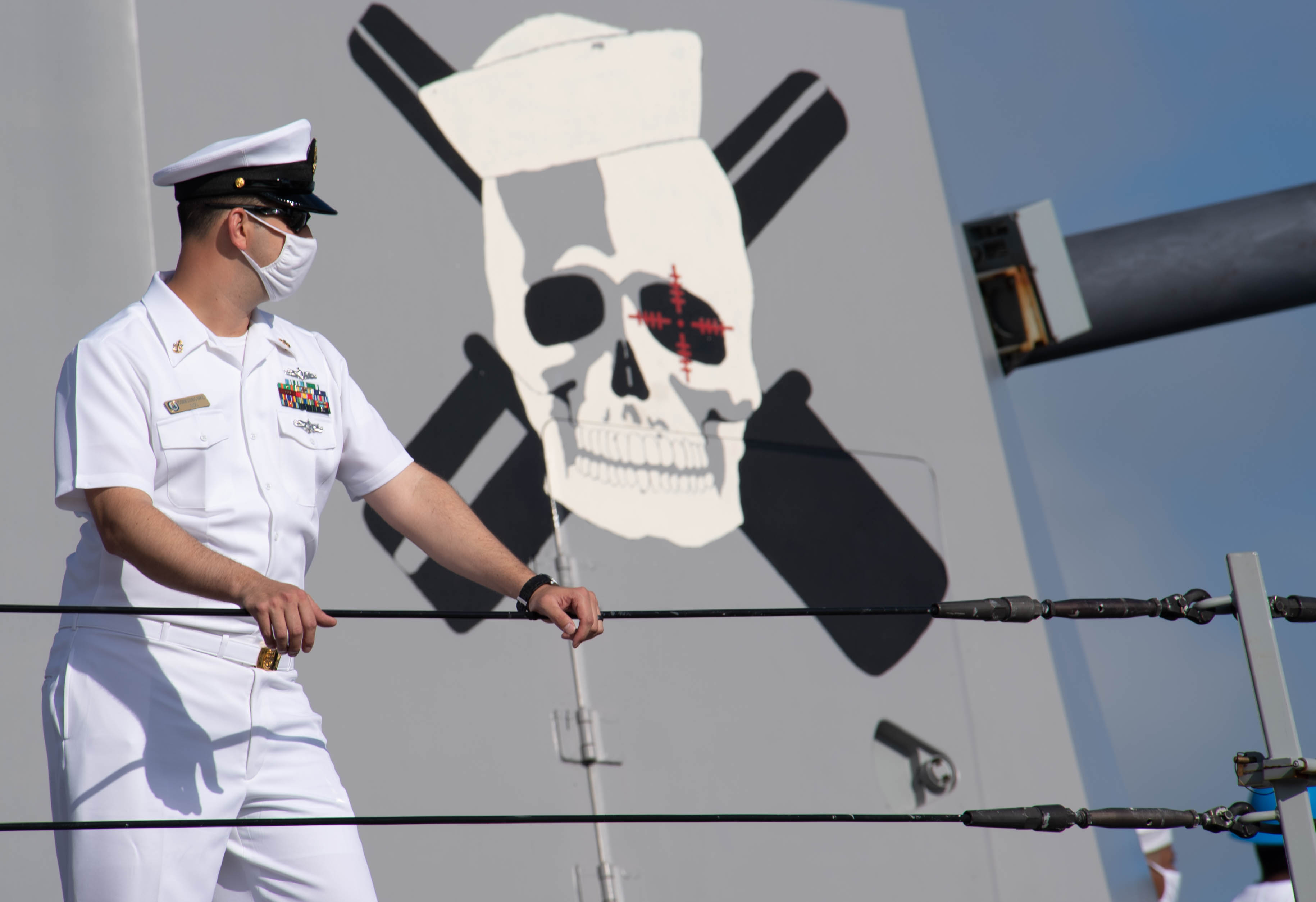 For the last 10 years, cartels have been moving more and more cocaine by sea, using increasingly complex, multi-milllion-dollar, custom-built drug boats that are difficult to detect. Built in the jungles of Colombia, the vessels have evolved from the slow-moving, semi-submersibles and the speedy “go fast” speed boats of a decade ago to more sophisticated low-freeboard vessels.

“These days, narco-subs typically carry about 1.5 tons of cocaine split into 1 kg (2.2 lb) bricks and then bundled together into bales,” wrote submarine expert H.I. Sutton in Forbes in May.
“This is more than most ‘go fast’ speed boats but less than they used to 10 years ago when 6 tons was a typical estimate. Much of their hull is actually taken up with fuel to give them an incredible range of more than 2,000 miles.”

The evolving vessels are combined with sophisticated international intelligence networks that provide cartels information to evade patrols and allow the smugglers to operate further from shore.

“They have a very, very active surveillance network. That’s not just what we would typically think of as criminal people. They pay anybody who will take the money to give them information. And so you have completely otherwise legitimate fishing vessels that are out there, and you phone somebody — they probably don’t even know who they’re calling — and say, ‘Yeah, I saw a U.S. Coast Guard ship, or I saw a U.S. Navy ship, or some partner nation vessel of some kind’,” Gabrielson said.
“These guys operate hundreds of miles offshore in boats. …. People would be astonished at [what] these guys are willing to do because it’s worth that much money to them. And so what we’re able to do is reshape where they operate and create pressure on the network by being able to funnel or otherwise seize or redirect toward seizure, toward other capabilities that we have.”

While the anti-trafficking mission gets the most attention, other operations in the region have benefitted from the extra iron in 4th Fleet.

In June, Nitze conducted a freedom of navigation operation past Venezuela. The destroyers were also able to hold an anti-submarine exercise with partner nations.

“If you look at the Navy’s mission of sea control, there’s some very valuable insights and training and practical skills that our teams gain by conducting these missions,” Gabrielson said.