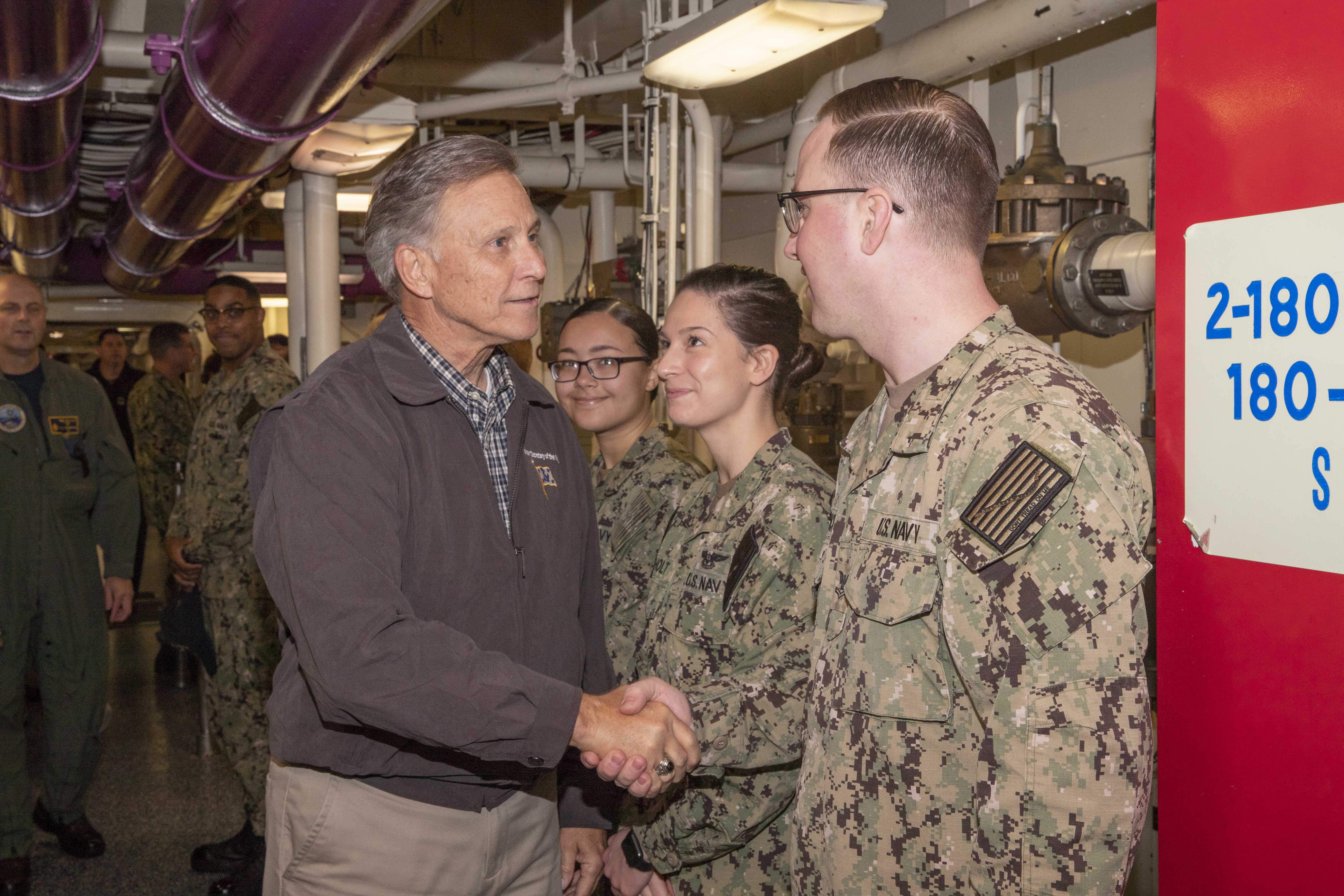 Hon. Gregory Slavonic, Assistant Secretary of the Navy for Manpower and Reserve Affairs, speaks with Hospital Corpsman 2nd Class Jay Cherluck, from Detroit, assigned to the aircraft carrier USS Gerald R. Ford (CVN 78) during a tour of the ship on Dec. 17, 2019. The tour provided an opportunity to discuss Ford and Ford-class unique manning and training developments, while also highlighting the capabilities and differences between the Ford and Nimitz classes of ships. US Navy photo.

Greg Slavonic is now formally serving as the acting under secretary of the Navy, after having been “performing the duties of” that role since late April.

President Donald Trump tapped Slavonic for the acting positon last week, the Navy announced. Slavonic has served as the assistant secretary of the Navy for manpower and reserve affairs since June 2018.

At that time, Slavonic took on “performing the duties of” the under secretary, though that title represents an administrative reality and was not directed by the White House. Trump nominating Slavonic for the acting job formalizes Slavonic’s holding of the under secretary’s office. Responsibilities of the office, the Navy said in a news release, include being deputy and principal assistant to the Navy secretary, chief operating officer and chief management officer for the Department of the Navy, as well as overseeing intelligence and intelligence-related activities, special access programs, critical infrastructure, and sensitive activities within the department.

The open secretary’s spot was filled on an acting basis by Army Undersecretary Jim McPherson for eight weeks until Kenneth Braithwaite could be confirmed and sworn into the job on May 29.

“I’ve had the opportunity to work with Greg Slavonic for a number of years and value his leadership abilities, foresight and friendship,” Braithwaite said in a Navy news release.
“I look forward to the innovation and inspiration he will continue to bring to the Department of the Navy (DoN) in his new position.”

“Over the past two years, I’ve been very fortunate to work with a great team of Sailors, Marines and Civilians to make advances and improvements in manpower and reserve component affairs for the DoN,” Slavonic said in the news release. “I am honored to have been selected to this new position, being able to do a job that I love, engaging with a broader scope of issues and personnel.”

While serving as assistant secretary for manpower and reserve affairs, Slavonic in January released a Department of the Navy 2019-2030 Civilian Human Capital Strategy that outlined how to attract and modernize a civilian workforce to keep pace with changes in the Navy.