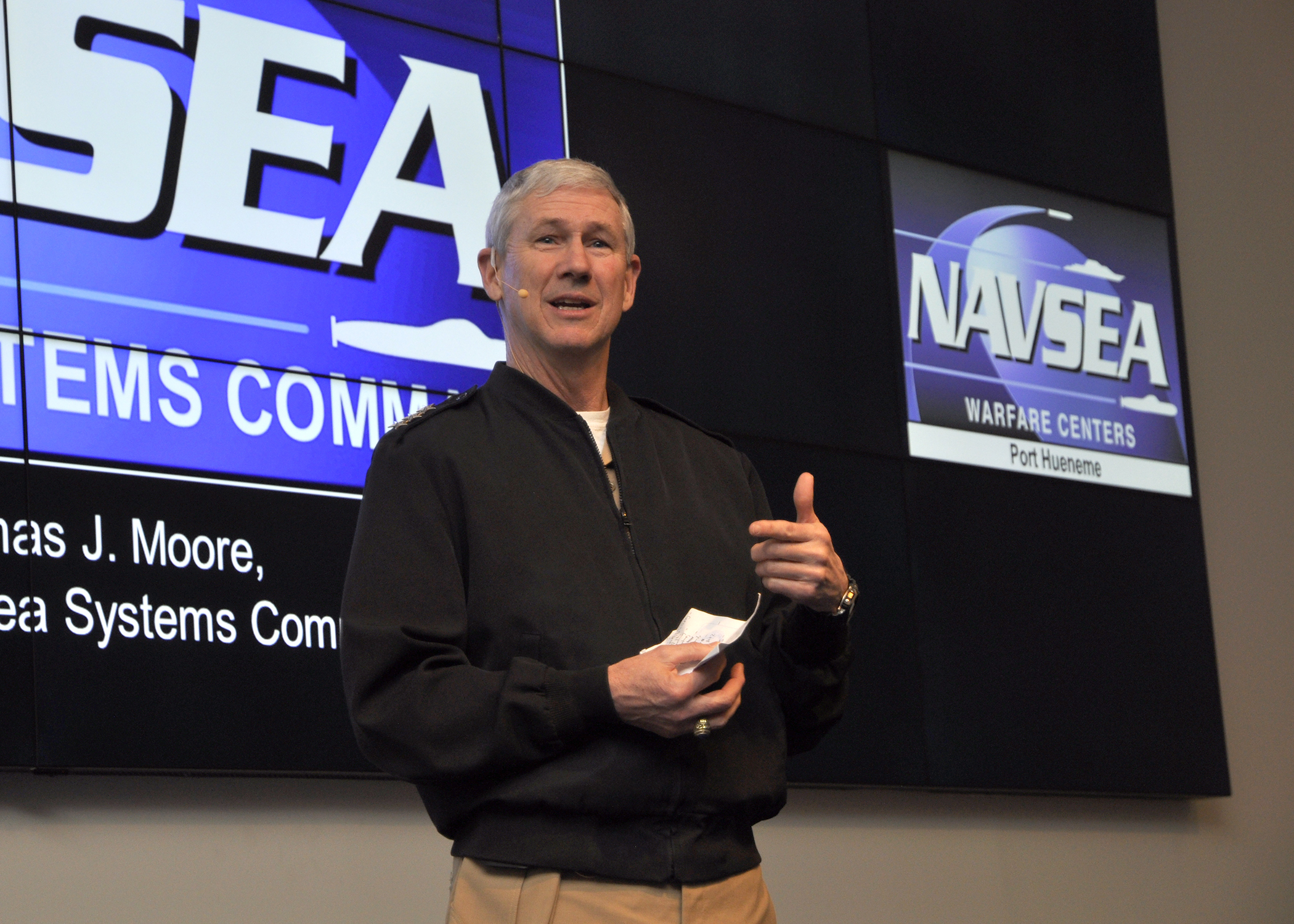 Moore has led the organization since 2016 and has overseen the ship construction and lifecycle management organization during a particularly interesting time.

Chief of Naval Operations Adm. Mike Gilday was at the ceremony – socially distanced, with limited chairs spread out at Leutze Park at Washington Navy Yard. After ribbing Moore for being “the most interesting man at NAVSEA,” Gilday praised the retiring vice admiral for his calm perspective and lead-by-example style of leadership.

“Tom did more than just set the example here, he chartered a clear path for this enterprise to follow. Under his guidance, NAVSEA has certainly expanded our advantage by delivering 40 battle force ships to the fleet, to include the Gerald R. Ford, the first new class of aircraft carriers since the Nimitz class in 1975; updated ship repair and maintenance processes to deliver ships and submarines on time to the fleet – that’s a massive job; taking a long view in improving shipyard infrastructure to improve productivity and to bring our public yards into the 21st century; creating the Cyber Engineering and Digital Transformation Directorate to secure and defend NAVSEA’s cyber ecosystem while supporting model based systems engineering,” Gilday said.
“But nowhere was Tom’s calm leadership more apparent than in NAVSEA’s stellar response to the COVID-19 pandemic. During this dynamic time, NAVSEA managed to stay open for business, it kept the fleet sailing while continuing critical work in our shipyards and in our warfare centers. Meanwhile, NAVSEA workers partnered with local communities to make masks, face shields and to design oxygen-delivery equipment.” 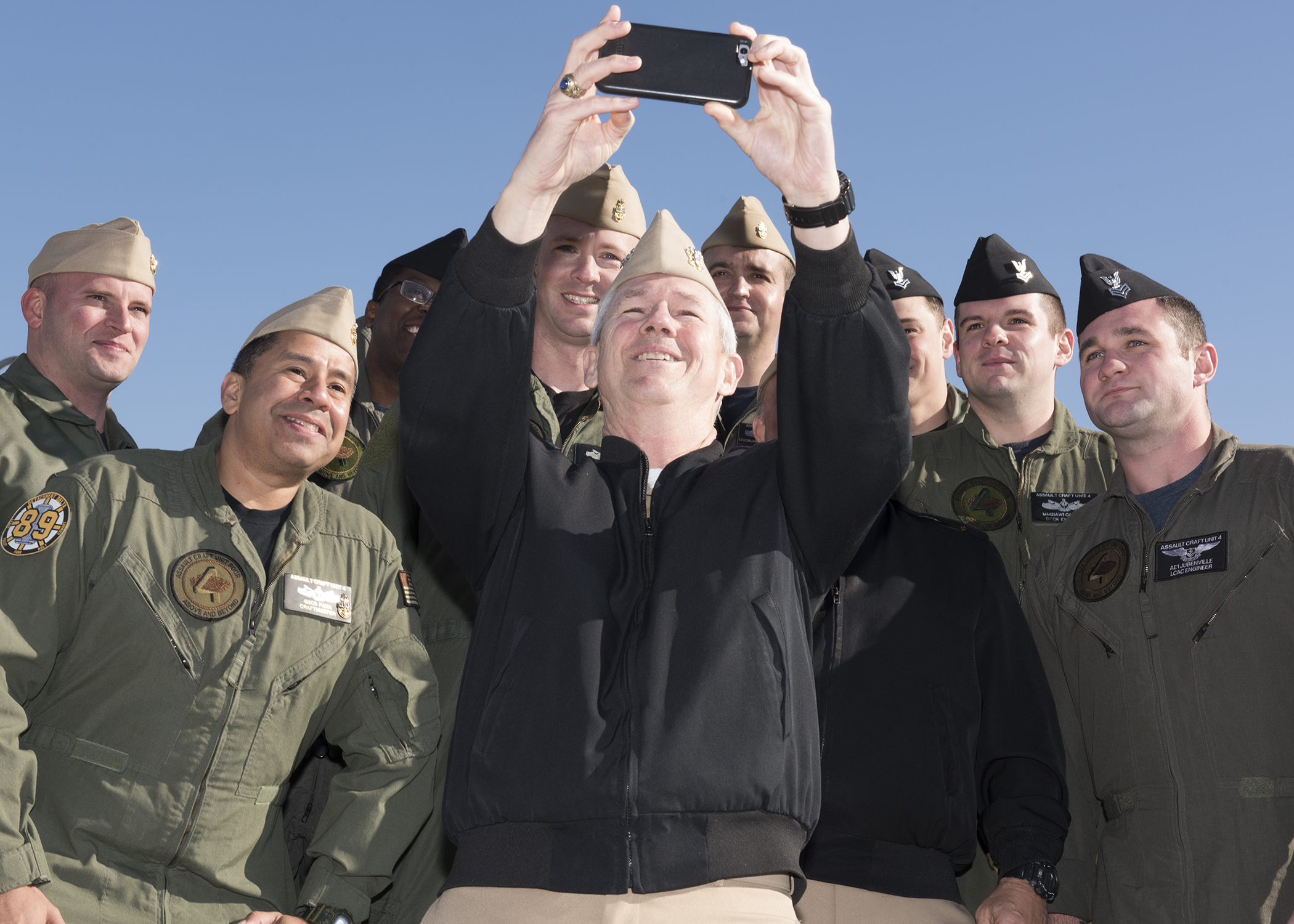 Moore said in his farewell speech that “I would like to say thank you to the entire NAVSEA workforce. You have made it a joy to get up and come to work each day. My favorite part of every day was roaming the halls or getting out on travel to talk and listen to you. You epitomize the exceptional people who make this Navy great. I wish more of you could have been here today, you are truly the force behind the fleet and I will miss each of you. The good news is for you, is you have an exceptional leader coming behind me in Admiral Bill Galinis. And I will tell you, there’s no better naval officer than Bill Galinis, I’m so proud that he’s relieving me today, and Bill, best of luck to you.”

During the ceremony, Moore was awarded the Distinguished Service Medal with a gold star in lieu of second award.

The award citation stated that “Vice Adm. Moore skillfully led the Navy’s largest systems command, managing an impressive portfolio of active appropriations valued at $232 billion, increasing the total number of ships from 272 to 300, and placing the Navy on a path to reduce maintenance delays by 88 percent in Fiscal Year 2020. He managed 840 foreign military sales cases, advocated for small business and improved contracting to provide a stable and predictable workload to industry and increase the capacity and throughput of naval shipyards by injecting resources, staffing and infrastructure. Vice Adm. Moore projected is goal-oriented strategy through clear communications and inspirational messages that spurred innovative problem-solving and technical accuracy and thereby empowered the NAVSEA enterprise to accomplish amazing results.”

Moore graduated from the U.S. Naval Academy in 1981 and began his career as a surface nuclear trained officer, serving on two nuclear-powered cruises and carrier USS Enterprise (CVN-65), as well as an Adams-class destroyer. He switched to the engineering duty officer community in 1994 and spent much of his career since working with aircraft carrier construction, maintenance and refuelings. Moore commanded the Program Executive Office for Aircraft Carriers from August 2011 to June 2016, when he took command at NAVSEA.

Galinis most recently served as the program executive officer for ships, one of five PEOs affiliated with NAVSEA that oversees surface combatant, amphibious ship, expeditionary ship and connector programs. Prior to that, he led the Navy Regional Maintenance Center organization that plans and executes surface ship maintenance at private shipyards, served as supervisor of shipbuilding (SUPSHIP) in the Gulf Coast and served as the San Antonio-class amphibious transport dock (LPD-17) program manager. Galinis is a 1983 graduate of the Naval Academy.

“It’s been said that good teams need hard problems. Boss, we have both here at NAVSEA, and we’re working urgently to get after those hard problems. To the men and women of the Naval Sea Systems Command enterprise, it’s a real honor for me to have the opportunity to work with you all and lead this talented team. I’m thrilled to be here and excited about the direction the organization is going,” Galinis said near the end of the ceremony.
“Today, as a nation, we are in challenging times: engaged in a great power competition, working through the ongoing pandemic, and then having a real debate on equality for all. I, we, for the NAVSEA team, need your ideas, your skills and your talents now more than ever, and I am very much looking forward to working with you to achieve our goals.”